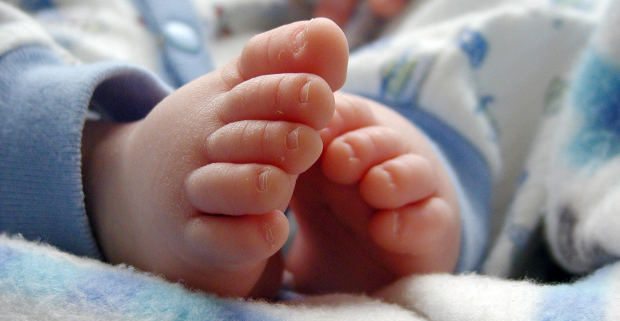 Footprints have been a part of crook-catching and crime-solving for a long, long time. Investigators have used them track bad guys from point A to point B, and beyond, if needed. They’ve also used footprints to match shoes to print found at crime scenes.

Detectives have matched material(s) found lodged in shoe soles to identical material(s) found at crime scenes (broken glass, soil, blood, carpet fibers, etc.). And they’ve even used them to make a decent scientific guess at the height and weight of a suspect.

Now, however, scientists have developed a new and better method of identifying footwear—Frustrated Total Internal Reflection (FTIR) imaging—that could link a specific person to a shoe. Well, sort of.

The new method of footwear ID creates a digital picture of the footprints in question.

Here’s how it works. First, though, it might be a good idea to brush up on your science and math skills, or, at least dust off the calculators and slide rules. I’ll show you why in a moment.

We each have our very own footprint, but I’m not speaking of the ridges on our toes and heels, etc. No, this is about the individual ridges and wear patterns on the soles of our shoes, and the marks they leave behind as we walk. I know, this sort of thing (wear patterns, etc.) have been considered in the past, but this new method goes far beyond the former technique of investigators collecting the footprint using various manual techniques, such as ink pads and specially sensitized papers, or using electrostatic dust print lifters as many of you had the opportunity to experience first-hand at the Writers’ Police Academy. 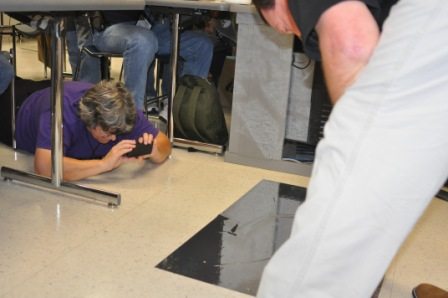 Author Donna Andrews photographing electrostatic footwear prints at the Writers’ Police Academy. This is Donna, like the thousands of other writers who’ve attended the WPA, going the extra mile for her fans and readers.

It’s extremely time-consuming to have investigators collect prints and then turn them over to examiners who painstakingly scrutinize them for abnormalities and then search a suspect’s shoes, looking for those same identifying marks. Then, when all is said and done, the examiners say yay or nay (the eyeball technique is a bit more accurate than that, but you get the idea).

Even the method of using electrostatic dust print lifters, although a bit less time-consuming and messy (no metal molds or goop to mix and pour, etc.), still requires eyeballing to compare to a suspect’s shoes.

FTIR, in short, eliminates the hours of hand examination by digitally detecting and recording the amount of and distribution of pressure applied to each area of the footprint (specific weight distribution). Thus, matching a print to suspect’s shoe is far a more accurate process than merely comparing a photograph to a shoe sole. The new technique could also tell scientists and investigators precisely how much pressure was generated when a crook kicked in a door during a home invasion or B&E. It can even tell investigators the extent of a person’s gait.

Okay, so here’s where your calculator comes in handy, and I’m only going to bore you with a tiny bit of the math involved, but it will give you an idea as to how this works.

Sorry, wrong equation. That was a math homework assignment for one of our neighbor’s kids.

FTIR is a bit less complicated than elementary school homework. Such as: “…many shoes are typically made from polymeric materials, they will have a higher refractive index than air. This change in refractive index results in a change in the critical angle required for light to be totally internally reflected at this interface which is now given by the equation

, where nshoe is the refractive index of the shoe material.”

And… “is achieved by ensuring that the light is always incident on the glass(plastic)/air interface at an angle that is larger than the critical angle, ?c. This angle can easily be determined from the formula

Obviously, this stuff is a bit above the pay grade of the average detective. Thankfully, the scientists who devised this new method of accurately measuring and gauging footwear evidence have done all of the hard work. For me, well, as fond as I am of science (I have to be, I’m married to a successful scientist), sometimes the old fashioned methods are still the best. Such as the time when…

One morning, immediately after downing a cup of coffee made in the pot in my office, I responded to investigate a burglary. Riding with me was a brand new detective. His first day in plainclothes. We arrived at the scene and it was quite obvious the point of entry was a side door complete with a clear dusty footprint next the brass knob. The jamb was shattered and splintered. The kick had been a nice one.

I spoke with the manager who told me the burglar had taken only cash, and that she’d hidden the money inside a secret location known only to her. I asked her a couple of times if she was certain that only she knew about the hiding spot. “Wait,” she said. “The other day a guy I know was here when I closed up, but he’d stepped outside just before I hid the money. He could’ve been at the window, looking in.”

I asked for his name, made a mental note of it, and then walked over to where my rookie partner was busy collecting all sorts of meaningless evidence and taking dozens of photographs of the footprint on the door. I let him finish, told him to clean the fingerprint powder from his face, hands, arms, and, what was a few minutes earlier, a freshly pressed and bright white shirt.

Once he’d properly stowed his evidence collection kit, camera, and goodness knows what else, I drove out of the lot. I knew the guy the manager mentioned and that he lived nearby. He was a crackhead known for stealing to support his $1,000 per day habit.

I was heading down Main Street when lo and behold the little dirtbag passed us going in the opposite direction, toward the scene of the crime. I was quite familiar with this guy, having arrested him many times over the years. I also knew his driver’s license had been suspended for DUI, a couple of them., my PC (probable cause) for a traffic stop.

I made a U-turn and rushed to catch up to the car. When I did, I hit the blue lights and burped the siren once. My stunned partner had no clue what I doing, and said so. “What’s going on,” he asked. Watch and learn, rookie, I thought as I stepped out of the car and hitched up pants on the side where my SIG Sauer 9mm rested.

I walked up to the driver’s window, which Carl Crackhead (not his real name, duh) had already rolled down. “Did I do something wrong,” he asked.

“You know your license is suspended.”

“I know,” he said, “but I needed a pack of cigarettes. I was only going to the store. Give me a break.”

He did, but moaned and complained the entire time.

“Let me see the bottom of your right shoe,” I said.

He held it up.

I took a chance. “Anything you want to tell me before I take you to jail?”

He confessed to everything. Watching the manager hide the money. Going there at night to kick in the door. Taking the money and then using it buy crack.

I handcuffed him and had him sit in the front passenger seat of my car. My rookie partner rode in the back with a confused look on his face.

After we’d processed Carl and he was safely tucked away inside a cell, my partner said, “How’d you do that? I mean, all you did was look at a footprint. How?”

I’d heard him tell the story of my “amazing” detecting skills to other officers over the years, and he’d often revisit the scenario with me. As far as I know he may still think my abilities to solve crimes were of the supernatural. Perhaps that’s why I so often call BS on Lividity Lanie’s voodoo crime scene skills. Because I know that’s not how it works in real life.

However, an investigator’s gut feelings are no joke. They’re as real as, well, adding tornadoes and boxes to learn the sum of apples and hermit crabs equals 9 to the circle of hummingbird power.

Goofy math equations – Potentially any school in the U.S. (I’m kidding, of course. We all know I’m only referring to those schools that teach Common core math. I’m still kidding, or am I? 🙂

Followon TwitterSubscribeto RSS Feed
What’s it Like to Work Undercover?