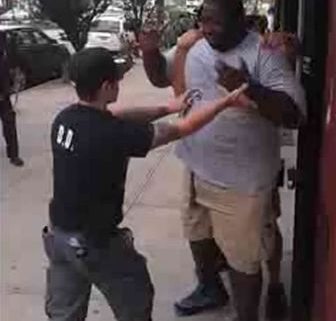 Eric Garner, a huge man who would be a handful to arrest for any officer, died last week after a brief scuffle with NYPD officers as they attempted to arrest and handcuff him.

Attempting to place cuffs on the wrists of someone who’s 6’3″ and 350 lbs. can be a real challenge, even when they’re compliant. However, when that someone resists the officer’s attempts to restrain him, well, that’s a real problem, and an extremely dangerous situation for both the officer and the subject of the arrest.

When someone uses force to resist an arrest, officers must then use the amount of force necessary to gain control of the person. Normally, that means the officers must use a greater force than that used by the suspect. If not, the combative suspects would always win the battle to run off and continue their criminal activity.

Police officers receive a fair amount of training in the areas of defensive tactics and arrest techniques. They’re taught how to handcuff properly, how to utilize various compliance tactics, and how best to defend themselves against an attack. The object is always to gain control and cuff the suspect’s hands behind the back, with everyone involved remaining injury free, if possible. Again, though, when a suspect resists arrest officers must do what it takes to bring the situation to a quick resolution. The longer it goes on the more chance of injury.

In the recent case of Eric Garner, bystanders captured the arrest on video. In the short film we can see the tremendous size difference between Garner and the arresting officers. Have another look (below) before we continue. 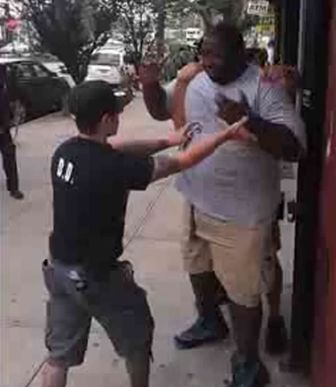 We hear Garner say something to officers that indicates they’ve had past dealings (Garner had previously been arrested over 30 times). Therefore, I’m sure the officers knew what to expect the moment they moved in to make the arrest…resistance. The fact that the officers stood there for a few minutes chatting with Garner was a good indication that they expected him to become combative and were probably waiting for assistance before placing their hands on him. I say this based on past experiences, not specific knowledge about this case.

As I predicted while watching the video, the moment the officers touched Garner he began to resist. Knowing that suspects, especially the big, strong ones, are more easily controlled when on the ground, that’s exactly what the officers did. They took Garner to the ground.

FYI for writers—The ground/sidewalk/pavement/hardwood, etc. provides a sturdy surface that’s used to pin hands, legs, arms, etc. to prevent further movement. Can’t get them to the ground? A wall or car hood also serves the same purpose. Otherwise, the suspect, who’s often much stronger than the arresting officer, could easily fight their way to freedom while severely injuring the smaller officer(s).

So, taking Garner to the ground is where we begin and where we discuss the technique(s) used to get him there.

Within minutes after watching the video, many media sources, civilians, and, of course, the Reverend Al Sharpton, began to yell and scream and print in bold type, “They killed him using an illegal chokehold!” First of all, chokeholds are not illegal. However, they may be against a department’s policy and procedures. The NYPD does indeed prohibit the use of the tactic.

Before going further, let’s talk about the chokehold. Just so you know that I have a bit of experience in this field—I’m a former police academy master defensive tactics instructor and instructor trainer. I’m one of the early members of a defensive tactics federation. I have a very strong background in Aikido and Chin-Na. I’m trained and skilled in knife- and stick-fighting. I ran my own school. I’ve taught rape prevention and self-defense for women at numerous colleges and at my facility. I’ve trained private security, military, and I’ve trained and taught executive bodyguards.

Chokeholds were once taught in police academies across the country. I learned it as a rookie and later taught the technique in the academy. Although, we stopped teaching it many years ago because the tactic had caused death. I’d like to point out that when applied and released properly, the tactic is effective and safe. Still, death had occurred and we stopped teaching it in favor of techniques that are much safer to utilize.

The questions stemming from Garner’s death are:

1. Did Garner die as a result of a chokehold?

2. Did the officer actually use a chokehold?

The answer to question number one is an easy one. We don’t know. That information has not yet been released by the medical examiner’s office. Anything other than “we don’t know” is nothing more than speculation and guesses at this point.

2. I have my doubts that an autopsy will reveal any damage to Mr. Garner’s airway, and there are two reasons for which I’ve based that opinion.

a) at no time during the video did I see any of the officers using a true chokehold.

b) a choke hold is a technique that pinches off the blood supply to the brain resulting in unconsciousness. It does not affect the airway. In the video of the NYPD incident, it does not appear that the officer did anything to compromise the suspect’s airway. The suspect was heard a few times saying, “I can’t breathe.” The tone of his voice sounded as if he was indeed in distress but, again, the chokehold, when properly applied does not stop airflow. If Garner could speak then he was getting some oxygen.

*By the way, there’s a counter move we teach officers who are placed in a choke hold by suspects. Tuck your chin into the crook of the choker’s elbow and the goon can squeeze all day long but he won’t be able to shut off your oxygen supply.

The photo below shows an officer with his arm around Garner’s neck. However, to properly and effectively apply a chokehold, both arms must be in contact with the neck, one on either side. In the image below, there’s nothing that would indicate the ability to successfully choke anyone into unconsciousness. What you see in the screenshot from the video is definitely not a true chokehold. 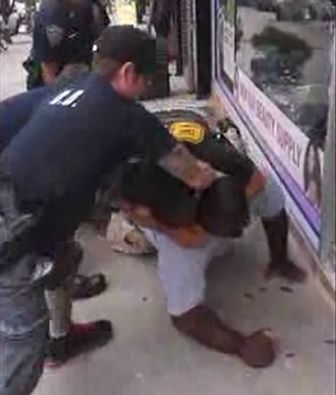 Here’s a photo of the technique, one that would/could cause unconsciousness. Still, the airway is totally unaffected. 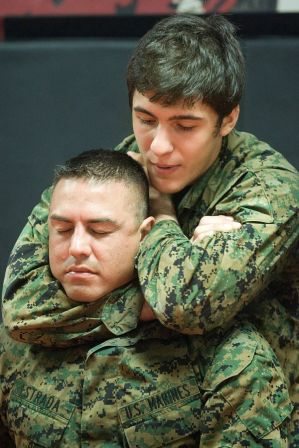 There’s a rule of thumb in defensive tactics, arrest techniques, martial arts, and other various styles of fighting, and that’s, Control the head and the body will follow.” Or, If you can direct uke’s head, you can direct his entire body. In some of the martial arts the “uke” is the person who “receives” a technique.

As someone who’s trained in fighting styles, and as a defensive tactics instructor/instructor trainer, what I saw in the video was what appeared to be an officer attempting to control the head of a much larger suspect, one they’d dealt with many times over the years. I also saw a second officer attempt to pull Garner’s head downward, toward the pavement. Another try at controlling the head. 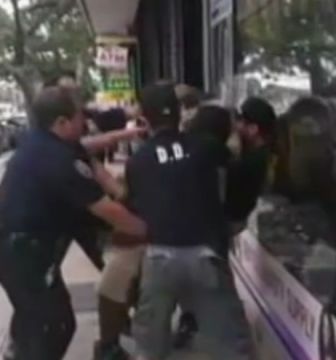 The officer wearing the shirt lettered “D.D. has his right hand on the right side of Garner’s head, and appears to be pulling it in a downward motion. The officer in green (the same officer accused of applying a chokehold) is leaning backward, another indicator they were trying to get Garner to the ground where they could better control him.

Remember, though, I’m seeing this with different “eyes” than non-trained citizens. I know what it’s like to be in situations like this one and those that are far worse.

Now, do I believe the altercation caused Mr. Garner’s death. Yes, I do. Who’s at fault? Well, if the arrest was justified, then most of the blame, sadly, rests squarely on the suspect’s shoulders. One, for committing a crime (a felony). Two, for resisting arrest, a situation that caused the officers to use the force necessary to gain control.

Some say that had Garner received quicker medical attention he may have survived. This, too, is something that, at this point, is speculation. Could someone have saved Gardner’s life? At this point we do not know. What we do know is that police officers are not medically trained. Did they summon help? I believe so. Do they have the authority to tell emergency medical responders what to do, how to do it, and when to do it? No, they do not.

Finally, situations such as this one are often difficult to witness, especially by people who’ve never been in an officer’s shoes. Or, for that matter, never been in any sort of physical altercation. Street fights and physical force are not pleasant experiences for anyone. They can be extremely violent, especially in appearance to the untrained eye. But it’s impossible for spectators to know what’s going on between officers and suspects, even while standing a only a few feet away.

Mr. Garner’s distressed, “I can’t breathe,” comments during the struggle were apparently sincere. Unfortunately, officers are used to hearing suspects say everything and anything as a means to get the officer to release enough pressure where they could escape custody or hurt or kill the officer. As I commented to writers yesterday, officers hear that sort of thing all the time. As well as, “I’m pregnant.” I have back problems.” “My doctors says you can’t handcuff me behind my back.” “I have AIDS.” And so it goes, with everything and anything they can say or do to get out of the arrest and going to jail.

It’s always a tragedy when someone dies during a police action. It’s a tough and gut-wrenching experience for the family to endure, and it’s important for officers to realize and consider that family members weren’t there, they don’t understand what took place, and that they’ve suffered a huge loss that can never be returned to them. However, their gentle and loving father, son, and brother is often not the same person/personality officers deal with on the streets.

On the other hand, the officers involved are also experiencing a great blow that could affect them for the rest of their lives.

There are no winners in these incidents.

In fact, everyone involved loses something, if not everything.

*In light of the Friday 8-1-14 release of Garner’s autopsy results, I  will be posting an update to this article on Saturday 8-2-14.

Followon TwitterSubscribeto RSS Feed
How To Approach A Cop: Getting Answers For Your WIP