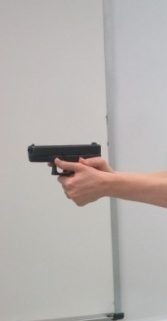 Michael Brown’s death is a disturbing tale, one that I’d expect to read in a work of fiction.

Not familiar with with this case? Here’s the background, according to the media and Brown’s family, friends, police, and eyewitnesses. The police aren’t saying much, though. After all, this is a death investigation and Brown’s demise was caused by police gunfire…several rounds.

By the way, as is true in all police investigations, it wouldn’t be appropriate for law enforcement to publicly discuss details of any criminal case until they have the facts in hand. However, the norm today is for media and family to demand instant answers, results, etc., especially when police officers are involved in a shooting situation.

Well, the last time I checked, everyone in this country has the right to a fair trial in a court of law. Vigilante justice is not what we as Americans should be screaming for at the top of our lungs from the top of city hall steps before the breeze has had the chance to blow away the odor of gunpowder. Proper investigations take time.

Anyway, back to Michael Brown, a young man who was shot to death by a Ferguson, Missouri police officer whose name and race is still being withheld (with the anger surrounding this case the officer’s safety would be a concern). Witnesses to the shooting say the officer is white.

According to various news reports and some witness statements, Brown and a friend (both African Americans) were strolling along in the middle of the street, minding their own law-abiding business, when a white police officer in a marked patrol car pulled alongside. The officer told the pair to get out of the street and use the sidewalk. The two men said they were near their destination and they’d get out of the street when they arrived there (or something to that effect). I think everyone, even the police, agrees this much is true—a police car pulled up beside Brown and his friend. After that…well, the stories of what happened couldn’t be further apart.

The police say the officer got out of his car, or tried to get out, but was shoved back inside by Brown. The two struggled with Brown attempting to take the officer’s gun, and a shot was fired while the two were still inside the vehicle. At some point the two men ended up outside where Brown was hit with several rounds from the officer’s weapon. Brown was 35 feet from the patrol car when he was shot.

On the other hand, Brown’s friend, Dorian Johnson, says (again, this is according to several media reports) they and the officer exchanged a few words about walking in the street and then the officer stepped out of his car and immediately fired a shot. Johnson and Brown ran. The officer fired again. Johnson hid behind a car but Brown stopped in the street and held up his hands to give up and to show he wasn’t armed, which he wasn’t, and that’s a fact we do know. The officer then, according to Johnson, shot Brown twice. As Brown was going to the ground the officer approached him and fired several more rounds into Brown’s body. Brown died.

Now, I cannot speak to this situation with any authority because I wasn’t there. Didn’t see anything and I know nothing more than what I’ve read. The same is true for the people—protesters—who took to the streets after the shooting, looting stores and stealing whatever they could get their hands on at the time. The same is also true for the those people, the Monday morning quarterbacks, climbing on the bandwagon to write and preach about the shooting. None of the aforementioned people, including me, know the actual facts of the case.

One person—again, she wasn’t there—wrote that the police department waited to make a public announcement about the incident so they’d have time to “…omit and tamper and vilify, time to label the shooting as anything but misconduct, as “manslaughter” and not ‘entirely preventable murder’.” That’s a pretty damning statement to make about an entire department. Sure, things are looking a bit dark and bleak where this one officer is concerned, but to say that an entire police agency would condone and hide facts that support a possible illegal/deadly act…well, that’s totally and utterly ridiculous. Stupid is probably a better term. Ignorant would be an even better one.

As you all know I deal only in facts. So lets go back and look at this incident from a fact-only point of view. Remember, though, our “facts” are only what we’ve read.

1. Michael Brown and his friend were walking in the street, an unsafe act.

2. A police officer stopped and told them to move to the sidewalk.

4. At some point Brown and the officer struggled. Police officials say the physical contact began inside the police car. To make this statement it’s pretty much a given they have evidence to support the comment.

5. Brown was fatally shot 35 feet from the patrol car.

6. Several witnesses say Brown had his hands in the air when he was shot and killed by the officer.

7. All rounds fired were fired by the officer’s gun. This does NOT mean the officer was responsible for firing each round. It’s possible that during the struggle the suspect pulled the trigger, or not. We do not know anything further.

8. Brown was unarmed at the time he was shot.

9. During a deadly force encounter, police officers are taught to shoot until the threat is terminated, meaning the suspect is no longer a danger to the officer or anyone else. When the threat ceases to exist, so should police gunfire.

10. A suspect who’s stopped moving and is holding his hands in the air is not an immediate threat.

11. An unarmed suspect who’s wounded and has no means of gaining control of a weapon or harming others is not an immediate threat.

12. Police can shoot a fleeing suspect if they believe that person will and/or is likely to cause serious harm or death to others. It is unlikely that an unarmed man who has surrendered is an imminent threat to others.

Finally, to read between any of the above lines would be a huge error. Evaluate only the facts, which are few at this point. Based on what we know, though, I’d love to hear your opinions.

Please do not bring race, gun control, politics, and hatred for all police into the discussion. Think like an investigator and leave personal beliefs and biases out of the equations. Did the officer murder Michael Brown, gunning him down in the street? Or, is there another explanation?

Keri Anne Clark: The Day The Light Went Out In Georgia
Scroll to top