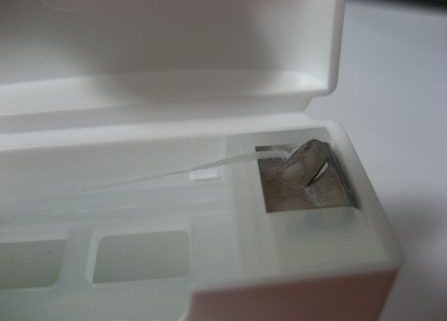 It’s no secret that prison and jail inmates have the uncanny ability to fashion a deadly weapon from almost any available material, including ink pens, nails, soap, batteries, and even newspaper. And, yes, even something as unassuming as dental floss can be transformed into an instrument of death. Actually, dental floss is a prized item in prisons and jails because of its versatility. For example:

1. In Wisconsin, two inmates braided over 3 miles of dental floss to make the extremely strong ropes they used to help scale the prison walls during an escape. Same thing in West Virginia, where an inmate braided floss to use as a rope. He escaped and was on the run for weeks before being captured.

2. Three Illinois prisoners made a rope ladder from dental floss. Salt and pepper shakers stolen from the dining hall were used as rungs/stirrups.

3. Dental floss can be used to saw through bars. It takes a long time, however, and requires a bit of toothpaste to achieve the goal. You see, toothpaste is a mild abrasive, therefore, when applied to dental floss…presto, an instant hacksaw.

4. Out of sewing thread? Well, dental floss could be your answer. Prisoners have been known to use floss for their sewing needs. For instance, the inmate who used floss to stitch together a dummy he placed on his bed to fool officers during his escape. And let’s not forget to mention the prison escapees who used dental floss to stitch up the gunshot wounds they’d received during their prison break.

6. Floss is also used to pass and retrieve items from one cell to another. Objects are tied to the floss and then tossed to a fellow inmate along the same tier. Or, the object(s) are lowered to a tier below. The same goal can be achieved through the prison plumbing. An object of desire (anything from drugs and alcolhol to food) is tied to dental floss (wrapped in plastic) and is then flushed down the toilet. The receiving prisoner/inmate also flushes a weighted object tied to floss. The two strings become tangled deep in the plumbing and the object is then easily reeled in.

7. And, of course, dental floss can be used to choke and strangle.

Due to the variety of uses for dental floss in the prison and jail environment, officials in many locations have banned the product from their institutions. Prisoners, though, have already filed a $500 million lawsuit claiming their dental health has been compromised because, as we all know, people who do not floss are subject to more cavities.

Isn’t it heartwarming to hear that these prisoners are so concerned about their oral health? You know, the same guys who ingest stuff they’ve retrieved from a common sewer line.