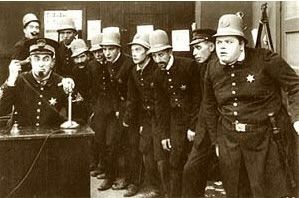 Good or bad, sometimes the stories are almost unbelievable. Such as…

Dorset police save words of blind author who wrote 26 pages after pen ran out. Police officers used forensic techniques to recover the words. The process took a whopping five months to complete, and all during their lunch hours.

Richlands, N.C. – The chief of the Richlands police department has lost his police certification because he failed the required annual firearms qualification. Now, the police chief can no longer carry a gun, nor is he allowed to wear a badge. And what’s a cop without a badge and gun? Normally, we call them…unemployed. City officials have urged the bad shooter to try again.

Suffolk, Va. – Thanks to a certain firefighter, motorists in and around Suffolk better start asking for ID when they’re stopped for traffic violations. Yep, one of the local fire marshal inspectors decided a woman wasn’t driving well enough to suit him, so he conducted a traffic stop using the emergency lights on his fire-department-issued Chevy Impala. He was, however, kind enough to let the woman go after giving her a stern warning for the erratic driving and for not wearing her seat belt. After all, what else could he do, he had no traffic tickets to issue, no badge, no gun, no…anything. Well, that’s not quite correct. He did have his young son riding with him at the time. Oh, I almost forgot to mention that it was also the firefighter’s day off.

Philadelphia – Police arrested a man for possession of marijuana. No big news there, right? Well…not so fast. The arresting officer, who, like all cops, was quite observant and noticed an unusually large bulge in the front of the suspect’s pants. Although flattered, I’m sure, the officer was a bit suspicious and had the man remove his pants at the police station. Seems the flattery was misplaced. The bulge turned out to be 89 bags of drugs that had been tied to the man’s_____ (you fill in the blank). An inventory of the drugs tallied 26 bags of suspected cocaine, 41 bags of suspected heroin, and 22 other assorted baggies in various colors. Now that’s a hefty package.

Portage, Wi. – Local police received a thumbs up from a 62-year-old woman. Normally, a hearty thumbs up would have been greatly appreciated, especially during these trying times for officers. However, this woman was driving drunk, heading the wrong way on a one-way highway, and each time she passed an approaching police car she offered a very energetic “thumbs up.” The intoxicated woman later told officers that she was tired of living. It was her 5th arrest for drunk diving.

Delaware, Ohio – Remember the kissing cop, the female officer whose image was captured on the police in-car during a few intimate acts with her married boss, the police chief? Well, she’s back in the headlines again, this time with her new boss, the county sheriff. The two were “coincidentally” attending training at the FBI headquarters in Quantico, Va. Reports suggest the also-married sheriff may have been spending a bit of county money to entertain Deputy Janine Senanayake (formerly Janine England). At least Deputy Senanayake is ambitious. She starts at the top. What she does after that is…well, heck, some of it is on camera (click the link to see the in-car video).

Los Angeles – Actress Amanda Bynes is a big hit with local sheriff’s deputies, especially the deputy whose car she sideswiped while driving under the influence at 3 a.m. Bynes was promptly arrested and held on a $5,000 bond.