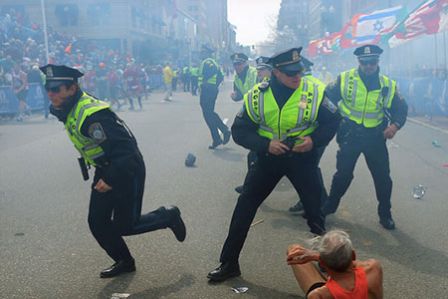 It started with an explosion and ended with applause, when an ambulance carrying the seriously injured Boston Marathon bomber pulled away from a home in Watertown, Ma. And that’s when a new round of anti-police chatter started to hit the internet, talk that I’d been loosely monitoring since the bombing first occurred on Patriot’s Day in Boston.

First it was, “If the police had done their jobs this would’ve never happened.” And, “Look what our tax dollars buy us, a bunch of out of shape fat people who run around with their guns drawn, trying to look good for the cameras.” “Why didn’t they find the bombs before the race? The only thing those idiots can find is a doughnut and an overtime check.”

When the smoke cleared and while the families began to grieve for their lost loved ones, and the nearly two hundred wounded were receiving treatment for their devastating and life-changing injuries, the next volley of complaints about police actions began to pour out across the web.

“Now we all know what martial law looks like.” “The government knew this was going to happen and did nothing to protect us.” They (the government) knew about this and thought they could handle it, but couldn’t.” “The Obama administration staged the whole thing.” “Actors were used to create all the media images. The real suspects were whisked away to Saudi Arabia in military planes.” 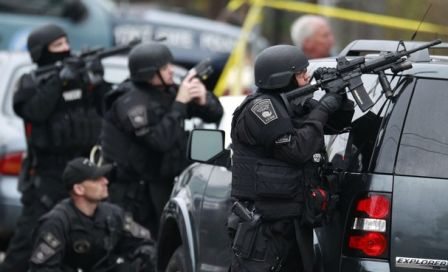 As the week progressed and authorities engaged the bombers in a shootout and pursuit where explosives, including another pressure cooker bomb, some anti-police comments began to suggest the police were cowards, hiding behind military-style clothing and gear. And some believe the two bombers are innocent, that the government is framing them.

“Over nine-thousand cops to find a 19-year-old college kid? He made them look like fools in their little dress-up play army uniforms.” “After all the lies and incompetence by these government agencies and media you still believe he did it? Come on, people!” “Next stop on our road towards a police state.” “Just as usual. The government overreacts and wastes taxpayer dollars.” “Those cops all have 30 round magazines in their scary guns. How many bullets do you need to kill two guys?” “Hundreds of millions of dollars? for two guys? really?!?” “For the life of me, I don’t understand how/why this endeavor warranted a virtual army of police, FBI, and military personnel. Hundreds of them, along with dozens of vehicles, SWAT teams, and a virtual arsenal. It seems like over-kill to me. Sorry.”

“Are you kidding? Look at all those fat cops getting paid overtime to stand around looking important.”

“The authorities needed to be seen act and pin the outrage on someone. These guys have been used as “patsys” to take the rap for someone else. Much like Lee Havey Oswald took the rap for the shooting of JFK. People believe anything the media tells them. The secret services of all major countries lie and manipulate Joe Public ad infinitum -Just to keep those in control of everything the freemasons and illumianti in their ivory towers. Now we have USA jingoism on the streets which is nauseating as well.”

“The crowd cheering a this is disgusting. How do they even know this guy is guilty? He has not even been charged with any crime yet”

And then there was the TV news media that reported numerous bits of information without first confirming it. Unfortunately, several had to backtrack several times. It was all very confusing to the viewers, and it led to many false Tweets and blog posts. I watched one CNN reporter who was very much trying to report only facts and no speculation, but Wolf Blitzer constantly attempted to twist her words to make the reports seem more exciting and dramatic. After each of Blitzer’s attempts to distort her words, the female reporter interrupted with, “No, Wolf, that’s not what I said,” and then she’d carefully restate her comment. Still, Blitzer tried again and again to make the reporter’s words into something totally different, and she again would correct him. Watching CNN’s coverage of this event was painful.

NBC did a good job of keeping the facts in front of the audience. Fortunately, I had my own sources that kept me informed, which also verified NBC’s coverage, and often disputed CNN and other media reports, including the New York Post. However, one NBC reporter told the audience that all cops are taught to shoot to kill. That, my friends, is totally FALSE. Police officers are taught stop a threat, never to kill. They’re trained to shoot “center mass,” the center of the target. And that’s because when aiming for the center you’re more apt to at least hit some portion of the target.

At one point, there was so much anti-police rhetoric floating around I decided to offer a brief comment on my Facebook page, which was being followed by several people during the situation as it unfolded last night. In fact, I believe I actually heard of the capture moments before it was reported on television. Anyway, here’s what I wrote last night regarding the police and their gear and clothing.

Imagine for a moment that instead of clacking away at your keyboards, pumping out the next great mystery, thriller, or romance novel, that your job is to suddenly grab a weapon and go door to door in an unfamiliar neighborhood, searching backyards, homes, basements, attics, dark crawl spaces, sheds, abandoned houses, and roof tops for a man with nothing at all to lose.

The wanted man is scared and has already killed four people—one of whom was a police officer-and absolutely has no fear or qualms about killing you. He more than likely has explosives with him. He even ran over his own brother when making his escape from a shootout with police.

The suspect has the advantage…he knows where he is and he knows where you are, and when you’re approaching. Every step and every breath could be your last, and the only thing you have for protection is your swat-like clothing, Kevlar helmet, and gear, which is especially useful for providing a bit of concealment. Hopefully, it will stop a bullet or two, but you know it won’t protect you against a bomb blast. Still, you move forward.

Sounds very dangerous, doesn’t it? Yet, many people still complain that officers assigned to dangerous duty dress in military-esque protective gear. They also complain that police use armored vehicles. Well, what would you have them drive up to a scene where known bombers and mass murderers are hiding, a Volkswagen Beetle?

It’s best to allow the pros do their jobs in the safest manner possible. Besides, most of the complainers don’t have the slightest clue what it’s really like “out there.”

So I say this to all the people sitting in dark, damp basements, in their dirty, sweaty underwear, while staring at a computer screen hour after hour. Yes, you, the folks who are quick to type barbed shots about the men and women who protect your rights and your soft, doughy hides. That includes you, too, the guy who complains about use of force and why police officers are leery of approaching criminal suspects without a weapon in their hand. I say this…head down to your local police department, apply for a job, go to the academy, put on a uniform and badge, and then find the first bomber, terrorist, murderer, cop killer, baby rapist, drunk biker, knife-fighting meth-heads, you see. Next, leave your gun in the car before running straight into the danger, headfirst. What? There’s more of them than you? The odds are 50 to 1? They have weapons? There are 150 badly injured people. Kids are dead? Blown to bits? People are screaming? Two of them are shooting at you? You don’t know where the shots are coming from?

You’re scared? Call the cops? But, you are “the cops.” There’s no one for you to call. You’ve got to take care of the situation. What’s that? A bullet just struck your head? Your backup was killed by rifle rounds that penetrated their cars? And the others were just hit by a homemade explosive device. What a shame. Turned them and their vehicles into shreds of flesh and metal confetti?

Gee, if only you guys had some of that funny-looking gear that so many people complain about. You know, maybe a helmet to protect your head, and an armored vehicle of some sort that would protect them from explosives and rifle rounds.

Maybe, just maybe, if you spent a few hours in the shoes of the men and women who saved Boston and Watertown from more death and carnage, well, just maybe you’d have something to complain about. Until then, you really should be thankful there are people who are brave enough to do the job. As many of you say…I’m just saying. 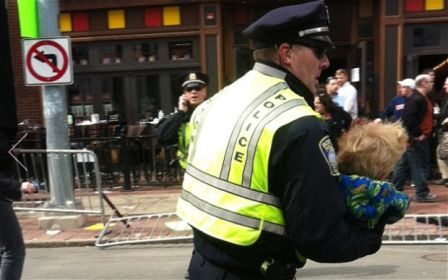 *To all who participated in the hunt for the cowardly bomber brothers, thanks for all you do. To all of you who complained about the police…don’t worry, if the day comes and you find the need to dial 911, they’ll still come to save you. It’s what they do, no matter how many times you kick them. 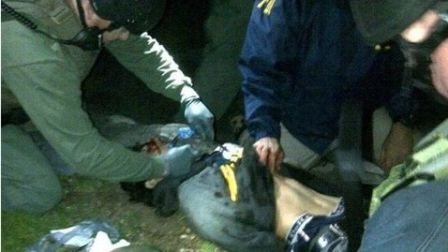 *To all our friends and former neighbors in Boston, we’re glad you’re all safe and sound. We were worried about you.

*Our condolences to the families who lost loved ones in this senseless attack.

Also, our condolences to the family of MIT Officer Sean Collins.