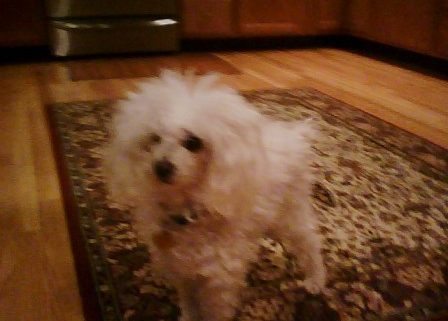 Nearly twenty years ago, I stopped at a service station/bus stop to fill the gas tank in my unmarked police car. In those days, the department had a contract with a fuel company that allowed us to fill up at various spots throughout the city, and one of those places also served as this particular bus stop. Rain was coming down in sheets, but I stopped anyway because but I liked to fill my tank when it hit the halfway mark so I wouldn’t be caught short during an emergency.

I was finishing up, placing the nozzle back into its proper spot on the pump, when I saw three young men approaching a waiting bus. Gusty winds blew the rain sideways at times and I was getting soaked. But the men (all three had a sort of homeless look to them—shaggy hair and dirty, well-worn clothes) seemed to be in no big hurry, splashing through puddles as they made their way across the asphalt, tugging tattered, rolling luggage behind them.

The pitiful puppy never moved. Instead, she looked confused and simply stood in the rain, shivering. I ran over and scooped her up and she immediately snuggled deep into my arms. So I carried her back to my car, cranked the heat on high, and headed home to tell Denene that we had a house guest. But I promised that we’d only keep her until we could find her a good home. After all, I already had two active-duty police canines living with us, a huge rottweiler and an overgrown lab that was a true sweetheart. We did not have room for a third dog. No way.

Well, we fed the little poodle and gave her a drink of water. And then we gave her a name and a permanent home. She was irresistible. Pebbles (I don’t remember how we decided on her name) quickly found a place in our hearts, and she was by our sides day-in and day-out for almost two decades. She tagged along on each of our moves, on a cross-country RV trip, hikes, to the beach…everywhere we went. In fact, we never went anywhere or did anything without her. 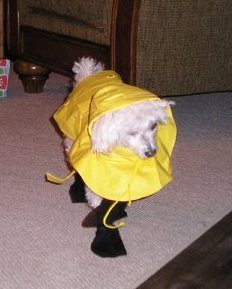 Pebbles was at my feet every day during the writing of my book on police procedure. She was my first “listener.” And she even caused a bit of a stir with my editor, who called one day to ask why, in the middle of a paragraph about fingerprinting, did I write,” Do you need to go pee pee?” Well, at that time I was using voice-activated software and I’d forgotten to switch it off at a time when I was preparing to take her outside for a break. I guess I missed the odd text when I proofread the chapter.

Denene and I enjoy our dessert around 8pm. And Pebbles enjoyed her own dessert at precisely the same time, four cheese-flavored Goldfish crackers. And we’d better not have been a minute later than 8, either, or she’d drive us nuts until we gave her her “fish.” Pebbles even slept with us every single night of her time with us. She had her own tiny pillow and blanket, too. And a cold nose and pointy toenails. She insisted on touching me from time to time during the night, making sure I was there. Or, if she was cold she’d snuggle as close as she could get. Sure, I hated it so much that I’d roll over and put an arm around her until I felt her go back to sleep. Yep, the three of us were as thick as thieves. Best friends. Pals forever. All for one and one for all.