“Just shut up and kiss me.” ~ Beckett

I don’t really know how to start today’s blog, because I’m still reeling from last night’s episode. I couldn’t go to sleep after screaming so hard at the TV. My first thought was WTF? Followed closely by the idea that the writers have lost their minds. Completely. Lost. Their. Minds.

The entire plot seemed so contrived, so ill-conceived, that I just lay in bed in shock. Then this morning I read an article that partially restored my faith. Partially, I say, because I’m still not happy with the route they’ve taken with the characters I love so much.

I would not have written it this way. Aarrggh!

The entire episode was a thrill ride, with so many ups and downs and twists and turns, I couldn’t keep up. I won’t go through the particulars about the “case” here, about Loksat and what it might mean, but I do know that I simply didn’t buy the manufactured danger. Bracken is dead, but now someone even bigger and badder that that slimeball hunting Kate? Ho-hum. Here we go again.

Then Rick’s stepmother pops up — his freaking stepmother, Rita, who has apparently been married to Jackson Hunt for ten years, a woman we knew nothing about, who just conjures herself up out of thin air even after Hunt lectured Rick about having no attachments. WTF? I thought he was a solitary soul, a ghost who never put down roots, but he got married? Unh-uh. Doesn’t fit. Then Rita has the gall to give Kate advice. Advice she stupidly takes. I’m sorry. I still believe Rick will be a heck of a lot safer with her than without her.

At this point in the show, my head was spinning. And unfortunately, that was just the beginning of the surprises the powers-that-be had in store for us. I’m keeping my part of the blog short today because all I want to do is rant about Kate leaving Rick. The article I read gave me hope that all will be well in the end, but I’m still angry at the path — or should I say the separate paths? Grr! — that they’ve sent Kate and Rick down.

This is supposedly a 6-7 episode arc, so it will last for a while. Lovely. The showrunners have promised, however, that they are committed to the Caskett relationship — i.e. Caskett happiness — and that at the end of the arc, their relationship will again evolve. That’s the word they used: evolve. Sigh. Maybe it’s the romance writer in me, but I want Caskett love.

This is one time when Good Cop and Bad Cop agree… WTF! I mean, what were and are the writers thinking? Do they have absolutely no imagination or a single new idea between them? Actually, this one was so bad that I’d prefer an entire show featuring a drunk, batsnot-crazy Lanie over the garbage I saw this week.

In addition to psycho Beckett leaving Castle to go off and singlehandedly save the world, we were introduced to Super Rita, Castle’s stepmom. Rita is, of course, the baddest and most secretest agent on the planet, and she has the uncanny ability to show up at just the right moment to save the day, no matter when or where that may be. Yeah, right. I guess the magic runs in the family because Castle has become the only human in the world who can solve a crime. Even the feds have to call on him to solve their cases. Soon, writers, you’ll not need to worry over new character development because everyone will be forced to use the same hero, the one and only Richard Castle. So long Jack Reacher and Kinsey Millhone.

Beckett showed us a new skill last night…cowboy surgery. Yep, they went there and I’m still shaking my head over it. Beckett took a big swig of straight vodka, right out of the bottle (winos everyone now have a new hero), and then used a needle and thread to sew up a huge, gaping gunshot wound on her side/abdomen (apparently the bullet grazed her flesh, carving a path as it went) Then she bravely forged on to do more stupid stuff.

– Remember the bad guys who were shooting at Beckett as she ran away down a narrow hallway?  They all missed her. For goodness sake, she was running in a straight line through a narrow space. A blind wildebeest with a slingshot could’ve done better. Yet, a gaggle of professional hitmen couldn’t get the job done?

– Why in the world would hotel security permit Alexis and Hayley to watch security cam footage?

– Alexis is now the show’s new computer genius. Don’t you just love her magic software? I heard, and this is between you and me, she buys it at the same shop that sells Lanie all her voodoo forensics supplies.

– The assassin at the airport. After he was shot and killed, Hayley pointed to a weapon on the floor. She said, “This guy had his gun cocked and ready to fire.” 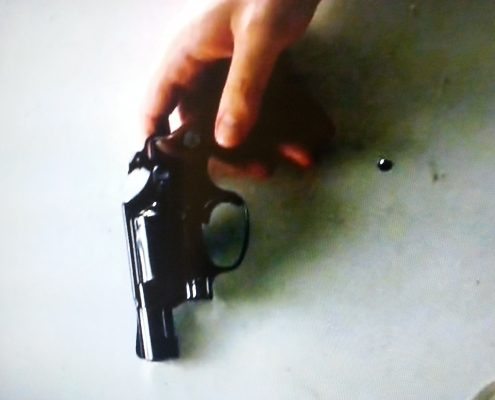 The gun (pictured above) was a revolver. Revolvers do not need cocking to be ready to fire. And, since revolvers do not have safeties, all a shooter has to do is pull the trigger and…BOOM!

– Beckett lost her gun again. Actually, she lost it twice in this one episode. The first time occurred when she left it on the bathroom sink, knowing people who wanted to kill her were looking for her. The second time was when a bad guy got “the drop” on her. He told Beckett to drop her gun and she complied by slowly placing it on the floor beside her.

– Ryan and Esposito also “dropped” their guns when ordered to do so.

Let me say this…Cops do not, not ever, give up their weapons. Doing so greatly decreases the odds of survival.

– The AG shot herself in the head. So what’s the first thing Esposito does when he sees the body? He removed the gun from her hand and examined it visually, right? Had this been a real crime scene their first step, before removing the weapon from the hand of the deceased, would probably be to call in the crime scene unit to take photos, use a 3D scanner to record the scene, etc. Then they’d remove the weapon from the hand. Besides, when cops handle weapons they always make them safe by emptying the chamber and removing the magazine, if so equipped. Then they begin their examination or processing.

* I goofed. Esposito grabbed the victim’s cellphone, not the weapon. Still, the above information is worth remembering, writers.

– Castle killed another guy last night. Had to. All the cops had surrendered their weapons to the bad guys. How many has he, a civilian writer, taken out so far? Anyone running a tally? 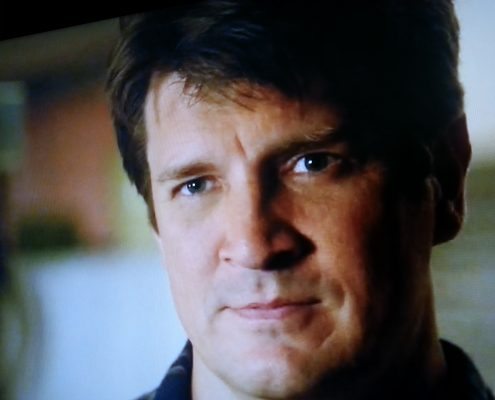 – If the goal of the bad guys was to kill Beckett and the guy hanging out with her, then why, why, why did they not immediately pull the trigger when they had her standing before them? She was unarmed because she’d already handed over her gun. So why not shoot? Please, if this situation comes up again, just shoot her and put this tired and crappy “he killed my mama” theme out of our misery.

– Bracken was murdered. HOORAY!!! Unfortunately, we now know there is an even bigger villain who’s job it will be to further push viewers and fans away. That’s who this storyline is murdering…US! The folks who used to enjoy this show.

Beckett is leaving Castle so she can ride off into the sunset to wipe out the new super-duper villain. Well, it’s clear now as to where the trouble lies with this show. It’s not the writers. Nope, it’s Beckett. Get rid of her and all the nonsense will disappear. So please, do us all a favor and have Bracken’s boss kill Beckett (calm down, she’s just a fictional TV character). Without her around Castle can go back to being the fun and funny character he once was. Kate Beckett, my friends, is nothing but trouble.

There, I said it and I’m not taking it back.