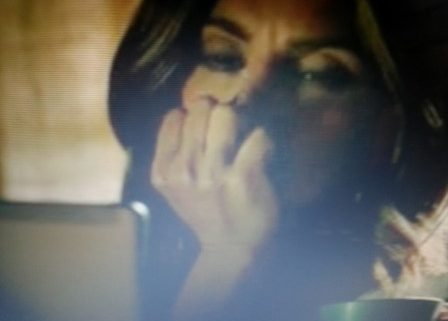 Melanie here. Before I begin my review of this week’s Castle, I feel the need to yell “spoiler alert!” because to do my job properly, I’ll have to give away the ending, and I don’t want any of you to miss out on the total satisfaction and sense of closure I now feel. If you haven’t watched the episode yet, stop reading this recap right now, cue it up on your DVR, and dive in.

Now, for those of you who did watch… can I get a big Woohoo? Even this morning, I’m still downright giddy. Finally, after six long years, Kate has defeated her worst nemesis. Yes… the scumbag and presidential candidate you and I have grown to despise, Senator William H. Bracken, has gone down in defeat and is now behind bars thanks to Kate’s amazing tenacity and determination. She has found closure for her mother’s murder and can now put the most painful chapter of her life to rest… meaning that after all this time, so can we. Thank goodness. I don’t know about you, but I’m more than ready to leave this storyline behind.

When the episode first came on Monday night, I was already wound up from watching back-to-back episodes of 24, and Castle picked up right where they left off. I was on the edge of my seat from the moment the episode began, thanks to its fast paced start in medias res — in the middle of things. No build up, no cutesy dialogue, no funny comedic scene to set the tone. Nope. We were simply dropped into the back of a surveillance vehicle with Kate and her camera, where we soon learned she’d been tracking a Bracken associate for some time. Well done, writers.

I bought into all of it, from Kate being accused of Vulcan Simmons’ murder, to the revelation of Smith being alive… until Rick left Kate alone at the hotel to go after a car a mysterious friend promised to lend him. I had trouble believing he would’ve done that, after his many protests about her going out at night by herself while working the case, and that jerked me right out of the story. Why didn’t he call his friend using one of their burner phones and have him bring them the car? Duh. And as for Bracken and his minions bursting into the room as soon as Rick left… well, I found that just a little too convenient. Once Kate escaped and collapsed in the hallway, however, the pace and sense of reality increased again, and that drew me back into the story. Rick picking up Kate so tenderly really got to me. (Yes, I’m a sap.)

Hiding the cassette tape inside the elephants on Kate’s desk at the precinct was genius, IMHO. That meant the evidence to bring down Bracken had been there all along. The scene where Kate suddenly appeared at the senator’s news conference and arrested him was extremely powerful. Stana did a great job — heck, she was trembling all over — and that really got to me. For fifteen long years, Kate has been after the evil monster who ordered her mother’s murder, and now she finally had him. They were in DC, though, so how could she make the arrest? Did the DC cops allow it as a courtesy? What about that, Lee? I’m curious.

Of course, I adored Kate and Rick’s heartfelt hug at the end. Finally free of her burden, Kate let out a deep breath and sank into him as he wrapped her in his arms. Caskett perfection. Now they can get married without Bracken’s threats hanging over their heads. Yay! I’m so glad.

The promo from the finale blew me away. I won’t say anything about it, other than that. Except that… I can’t wait. Woohoo!

Well, Melanie and I are coming from two different galaxies, far, far away. We couldn’t have two more opposing views of a single hour of television viewing. She loved this episode while I thought it was darn near stomach-churning.

I suppose my dislike of this particular episode stems from a distaste of the long and grueling years (yes, years) we’ve had to endure the “he killed my mommy” storyline. Yes, I understand how someone could become obsessed with finding the person who killed a loved one. But this case, with the crooked senator and his ties to a drug kingpin, and the “maybe he’s dead and maybe he’s not” Mr. Smith character are extremely tiresome, not to mention downright ridiculous. And speaking of ridiculous…

– Double tap to the chest. Fatal round to the heart. Don’t you just love how she knows these things while the victim is still fully clothed? Medical science should grab this M.E. and do a study to learn how she can magically see inside a human body without the use of x-ray and/or the slicing and dicing that all other medical examiners and coroners are limited to. You know, that thing called AUTOPSY.

– Based on blood patterns. Lanie, I believe you were going for bloodstain patterns. I guess someone spilled coffee on your copy of the script, blurring your lines.

– Shooter was careful and picked up all of his rounds. New York City sure got a fantastic deal when they hired Lanie. Not only does she save money with her ability to “see all” at the crime scene, eliminating the need for an autopsy and laboratory testing, she also does the job of the crime scene unit, looking for spent brass and other evidence. Hey, Lanie. How’d you know the shooter didn’t use a revolver, a handgun that DOES NOT eject empty casings. Oh, that’s right, you have the uncanny ability to look at a bullet wound (without removing clothing) and determine the caliber and type of weapon used to fire the rounds.

Enough about Lanie and her nonsense. Let’s move on to Beckett, the fugitive (please know that I rolled my eyes while typing the word “fugitive”).

This episode had something for everyone, didn’t it? A little romance, action, dead men walking, dirty politicians, rogue cops, stereotypical internal affairs detectives, and (drum roll, please)…you guessed it. Beckett was kidnapped, again, for the umpteenth time. Luckily for us, the TV viewing audience, she didn’t have a pistol with her. You know, so the bad guy couldn’t take it from her. Instead…hold on to your hat…Beckett grabbed a pair of scissors to use as weapon, BUT, the bad guys made her drop them, once again disarming her. 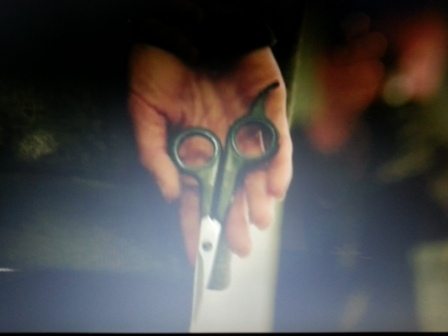 And what’s up with that capsule they supposedly made her swallow, but she kept it inside her mouth for a long, long time. Don’t those things dissolve? Is her saliva as magical as Lanie’s voodoo science?

Of course, in the end Beckett got her man. Maybe now they’ll drop this stupid, never-ending, ridiculous, nerve-grating, eyeball-poking, bamboo under the nails, storyline, and move on.

Please, please, please let this storyline die. Kill it. Drop a boulder on it. Blow it up with a massive pile of C-4. Package it and send it to the person you hate the most. Bury it. I don’t care how you do it. Just. Get. Rid. Of. It.

And take 3XK with it.

This is unusual for me, but the only thing I liked about this episode is that it ended.