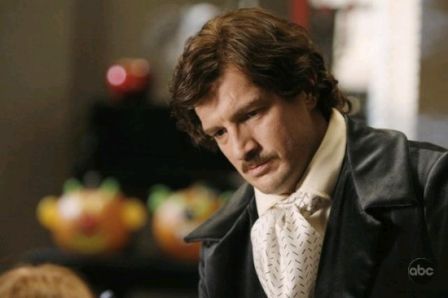 Goodness, where do I start with this fiasco titled Vampire Weekend? It’s always best to begin with something positive, so I’ll say this…I’m positive this was absolutely the worst episode of Castle that’s aired so far. Honestly, it was painful to watch.

I was optimistic about the show this week, because last week’s episode was just so darn good. I’m guessing the difference is in the writing. Well, that and you know who (the M.E.) was back. That woman single-handedly destroyed this episode. What a freakin’ train wreck! But in all fairness, she’s not writing her own lines. However, the M.E. last week was really good and I doubt he was doing improv.

Thankfully, I have a ruptured disc in my lower back and the pain medication prescribed by my doctor helped me sit through what I can only describe as garbage TV.

Nathan Fillion was great, as always. And Stana Katic (Beckett) just gets better and better. Her portrayal of a tough as nails cop is well-played. She also cleans up quite nicely. And she can be funny as well. Fillion’s charm and wit along with the great chemistry between him and Beckett are the only things keeping this series from sinking to the bottom of the septic tank.

Let’s take this one step at a time, starting with a comment made by Beckett as she and Castle walked through a cemetery heading to the first murder scene. She said that Halloween week is one of the worst weeks for cops. That statement was on the money. Halloween does seem to bring out the real crazies, like the people who raid graves searching for souvenirs (yep, I once worked a case where that happened). Of course, Christmas, Thanksgiving, Easter, Flag Day, Father’s Day, National Bird Day, Bean Day, and Fruitcake Toss Day all have their own special crazies.

And speaking of crazies, let’s get it over with. Enter the medical examiner. Shoot me now…please. 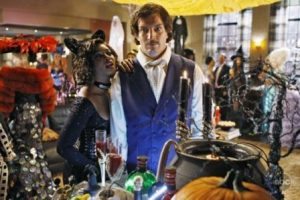 The pathologist is seen sitting beside the dead body of a young man. A wooden stake had been driven through his heart. M.E. Parrish is taking notes and says to Beckett, “Looks like he struggled.” How did she know this? Were there defensive wounds/splinters in his hands? Did he look tired? Worn out? Did he have that “freshly struggled” look on his face?

– Her next words of wisdom were, “He was hit on the head before he was stabbed.” Again, how would she know this prior to autopsy?

– She found hair on the body and said it was synthetic, and came from a wig. There’s no way she could know this without lab testing, which, by the way, the M.E. doesn’t do in the morgue. That’s a job for scientists and techs in another department, or maybe even another facility. And she certainly wouldn’t know the results of that testing so soon. Of course, she could offer her opinion, but this woman has super-forensic powers and doesn’t need scientific testing equipment.

– Parrish says the victim had two avulsions (flesh that’s torn away) near the femoral arteries. Later she says they were puncture wounds. The wounds were inflicted by an admitted female vampire who was merely drinking blood from the victim prior to his death (this was a consensual act and had nothing to do with the murder) caused the wounds by drinking/sucking blood. Therefore, I’d assume the wounds were punctures, not true avulsions. After all, she wasn’t eating the flesh.

– Parrish says that in order to break the ribcage with the wooden stake the killer would have had to use a rock to drive it in. Why not a hammer, or something similar? Why would it have to be a rock?

– Beckett tells the M.E. to “run” the stake for prints. Without a doubt, the M.E. would send the stake out for  examination. The police would want it tested for many things, such as prints, DNA, and trace. But medical examiners don’t generally fingerprint items themselves as we’ve seen this one do in the past. Apparently she runs a one-stop operation. Besides, Beckett isn’t her boss.

– I have to give credit where credit is due. Detective Kevin Ryan, played by Seamus Dever, gets better every week. He’s actually beginning to act and sound like a real cop. His partner, Javier Esposito (Jon Huertas) is also rising above rookie status. I noticed his sidearm, badge, spare magazines, and handcuffs were positioned properly this week.

-Beckett enters a dark room to search for a suspect. She holds her flashlight against her gun, in front of her body. This is not something that’s normally taught during police training. Close, but not quite. The manner in which Beckett held the light made her a target if the suspect had been armed and fired at the light source.

– A crazed suspect jumps on Castle, attacking him. Beckett, along with Larry and Curly, danced around the struggling duo while aiming their semi-autos at the pair of fighters. Real cops would have pounced on that guy. He’d have been cuffed and stuffed before you could say, “The medical examiner character is awful.”

– A mentally ill suspect (the man who jumped Castle) is in a holding cell. The M.E. walks out of the cell area and offers a diagnosis of the man’s condition – his mental condition! So, not only is she the M.E. and psychic forensic evidence dreamer-upper, now she’s a shrink.

– But wait, it gets better. She treats Castle’s wounds (he was bitten during the scuffle with the mentally ill guy) with an antibacterial something or other. In real life he’d have been transported to a hospital. Bite wounds are pretty dangerous. Besides, how many pathologists do you see treating live patients?

– Was I seeing things, or was the psychologist on the show played by the Jack, the UPS driver from Mad TV?

– The M.E. examines the dead werewolf guy. She says he was killed by a round from a 9mm. Again, she couldn’t known this without firearms testing. She also said the wolfman’s hair was synthetic and had been glued to his body with spirit gum. More psychic babble.

– She pinpointed a victim’s death to within two hours of another victim’s murder that had happened a few days before. She made her determination based on lividity, which becomes fixed after a while, deterioration of the body, and the smell of spoiled Thai food in the room. She figured all this out before any testing, while still at the crime scene. She also said the victim had been killed during the day. To verify her diagnosis, the victim’s watch had stopped at 4:00 on Oct. 27. I’ve investigated many homicides in my day, and not once has the victim’s watch ever stopped at the exact time of death.

– Beckett questions, no, she interrogates a murder suspect with his attorney sitting beside him. This would never happen. No attorney worth his retainer fee would ever allow his client to speak with the police unless some sort of deal/protection was in place.

– Castle walks the female killer through a section of holding cells that contains male prisoners. No way.

Finally, the best part of the show appeared on screen, the end.

Oh, Beckett’s costume was funny – the little puppet that popped out when she opened her coat. 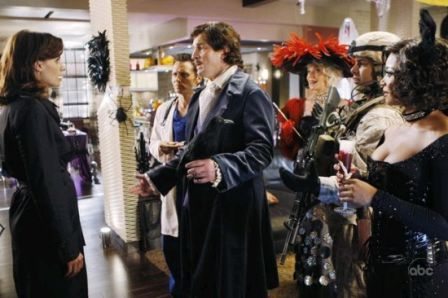