Many Castle fans are raving about this week’s episode, the first of 2016 after an unbelievably long winter hiatus. Mainly because Rick and Kate are back together in private. Hallelujah! Even with that lovely development, however, I’m not so enthused. Sure, I loved the tiny glimpses they gave us of them when they were alone, when they acted like the in-love couple we’ve come to know and adore. The rest of the show, however? With them fake-fighting at the precinct and pretending to date the fictional Svetlana and Dr. Livingstone? No. Just… NO.

Ryan and Esposito (who are detectives, I might add) must be complete morons to not have already caught on. I mean, please. The names Rick and Kate chose for their “new flames” should be enough to tip off the boys, but if not, the couple’s silly over-acting should give away their whole crazy scheme. The writers should be lined up and shot for continuing this charade, and I learned yesterday it will go on until episode 16. Holy moly! Even this loyal Castle fan isn’t sure she can stomach this stupidity for that long.

The case had promise and I did enjoy some of the a capella singing, but IMHO it went on much too long. This is a crime drama, not a musical. And when Espo broke into song to question one of the singers, I almost got up and left the room. Sure, Jon Huertes (Espo) sings in real life, has an album out, and has even joined with Seamus Deaver (Ryan) to form a duo, but this show is not the right venue to promote this venture.

Please, Castle writers and showrunners: Put us out of our misery and give us back the show we know and love, with Rick and Kate together solving cases without all the silly pretense and stupid, contrived storylines.

Next week, we get two episodes. One on Sunday night, and one on Monday. I’m hoping they’ll be much better than this one. I love this show and am ready for it to shine again.

I’ll begin my portion of what will be a very brief review of the police procedure, forensics, evidence, interview and interrogations, etc., by saying this episode was horrible. From beginning to end, it was rotten to its snoozefest core. The writing. The cheesy acting. And the dumb case. All horrible. I don’t understand why the powers to be let it happen to what was once a really fun show.

The actors are great. They, when allowed to, play the parts of police officers/investigators as well as any actors around (with the exception of the former cast of Southland). But, for some unholy reason—

Wait a minute! Maybe… Just maybe…  Could it be this simple? The cure? Yes, I’m convinced of it. The show needs a good, old-fashioned head-spinning, pea-soup-puking, exorcism to rid itself of the demons who’ve possessed it for so long. 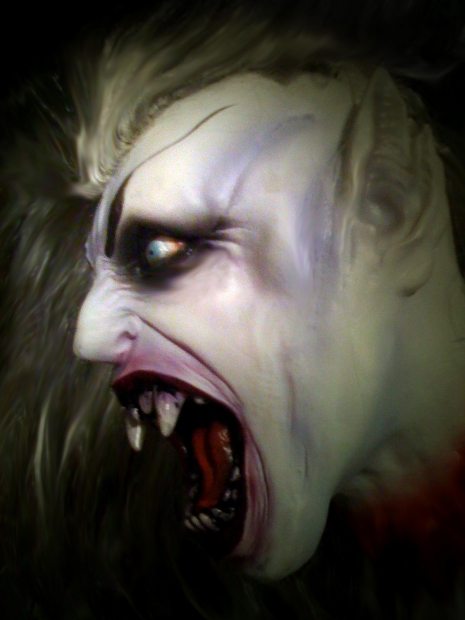 An exorcism to purge itself of boilerplate scripts, goofy scenes where detectives investigating murders engage in singing battles with homicide suspects, a husband and wife cannot live as husband and wife out of fear of some sort gloom and doom death plot, yet they sleep together, work together, hang out together…everything but say, “we’re married.” Speaking of boilerplate scripts, who didn’t know the ID of killer the moment we saw him on the screen, sitting there with that flashing red neon “I’m the Killer” sign hanging above his head.

So, Castle, a non-cop, is forbidden to work cases and to be at the precinct. However, he continues to lead investigations, interrogate suspects, search property, engage with murder suspects, tromp around inside crime scenes, and, well, it’s just dumb. The original premise of this show, the reason everyone fell for it, was that Castle, a writer (remember when he was a writer?) tagged along with Beckett for fodder for his fiction. You know, much like each of you who attend the Writers’ Police Academy, which, by the way, is over the top FANTASTIC this year (Registration opens at noon EST on February 21st. Slots go extremely fast so be at your computer and ready to sign up the moment the clock strikes 12).

Sorry, I was distracted there for a moment, thinking about the absolutely thrilling Writers’ Police Academy. But back to the show…

So, Castle and Alexis head over to an abandoned mall to do a bit of super-snooping. The place is spooky and definitely empty. So empty, in fact, that even the viewers at home heard the echoes of tiny rat toenails clicking and ticking against the concrete as the hairy, flea- and plague-infested rodents scurried about the place. It was so silent and still that (here comes a blast of sarcasm, so duck) Castle and Alexis couldn’t hear a few dozen kids singing their lungs out in the next section that was mere feet away from them. A section that, by the way, was separated from them by only a thin curtain. And, apparently that magically soundproof curtain also blocked the smell and smoke that poured into the air from two very large bonfires. Yeah, DUMB.

One last point before I try to erase this particular episode from my mind. Castle, when assisting the NYPD with cases, is acting as their agent. Therefore, he cannot do things on his own, for the benefit if the police, such as search homes and businesses and hack into the internet accounts of criminal suspects. It’s illegal, and anything he discovered while doing those things would not be allowed as evidence. Fruit of a Poisonous Tree is what that’s called—evidence obtained during a violation of the 4th Amendment.

And, after watching this show, that’s exactly how I feel…violated. My trees have been poisoned.

The Worst Lipstick Attack in History
Scroll to top