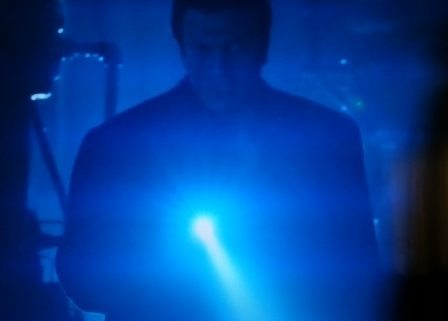 “Castle, we’ve got a murder…to solve, not commit.” ~ Beckett

I enjoyed the show this week, but not as much as I thought I would. The episode did have some funny moments, especially at the beginning. Rick’s irritation at Alexis letting her friend use his laser tag gear cracked me up, as did his response to Martha’s beau wearing Rick’s pajamas. So funny.

Our dynamic duo got called away to a murder soon after encountering all of this unusual entertainment and had to leave the loft almost the moment they arrived. The murder was an odd one, having occurred in a simulation of a one way mission to Mars. Rick, of course, loved the opportunities this investigation afforded, especially their having to don space suits before entering the simulation area. A lot of this made me giggle, too.

The rest of the episode I found fairly ho-hum, except for Rick and Kate’s brief return to the loft when they discover Martha is inside again with her beau and then encounter Alexis and her pack of friends at the door. All Rick and Kate seem to want is some alone time in their own home. So they call a family meeting… to happen later.

After this brief interlude, our two crime solvers returned to the precinct to work on the case, and I quickly decided I didn’t care who had killed the astronaut. I didn’t enjoy all the drama around Mira, who obviously didn’t kill Tom. The other astronauts did. They also tried to kill Rick and Kate once they put two and two together, and had to yawn again. Please.

Of course, they escaped and arrested the persons responsible. Yay for them. I was so happy the case was over and delighted with Rick and Kate’s return to the loft and their family meeting with Martha and Alexis (who did not come because her grandmother told her to stay away.)

Turns out Martha had an important announcement to make: She’s moving out of the loft and getting her own place. Sweet! Now Rick and Kate will have the loft to themselves more often. Martha even mentions the possibility of little Castles in their future, and I loved that. What I didn’t love was Rick and Kate bolting from the loft almost as soon as Martha left because the place was too quiet. Really? After they’d kissed in the hallway on their last trip home so they could do so in peace? This seemed way out of character to me and not in tune with the rest of the episode. Don’t know what the writers were thinking. Sigh.

Now we have a three week hiatus before the next episode. Happens this time every year. I look forward to seeing episode seventeen when the show comes back. Just hope it’s more satisfying than this one.

This episode was better than the last, by far, but for me it was a predictable yawner. Still, there were plenty of funny moments that were reminiscent of the Castle of days long ago. Castle playing space man. Castle being excited about going to Mars. Castle…well, just Castle being Castle.

I even thought the blushing computer was humorous. Did you see it? When MIRA was caught lying her graphics turned red.

Mama Castle moving out was extremely predictable. I mean, who didn’t see that coming?

But let’s take a quick peek at the police aspects of the show. Remember, my job is to point out the rights and wrongs for the writers out there. So…

– Ryan was absolutely correct that DNA from exhaled breath condensate can be collected and tested for ID purposes in criminal cases. It can be done and it has been done. However, the copy of the autoradiogram produced by gel testing of DNA we saw Ryan holding is not the typical result we’d see in most modern DNA testings. An autoradiogram is a sort of x-ray picture of where radioactive probes have adhered to alleles. (It’s a picture of someone’s DNA).

Today’s DNA tests are most often run in a genetic analyzer, which produces an electropherogram, a graph showing peaks and valleys, not the black and white rectangular bands produced by gel testing that results in the autoradiogram. Some labs still run gel tests (NYC, though?), so this wasn’t a total ding. Genetic analyzer above left, and gel testing method on right.

You can read more about DNA testing in one of my past articles. DNA Testing

– Castle and Beckett are intentionally locked inside the pod with poisonous gas pouring in. In case anyone’s keeping a running tally, that was yet another abduction. Oh, was there ever any mention of attempted murder charges filed against the people who locked the dynamic duo inside that pod-thing?

And, speaking of the three co-murderers, how soon was it when you zeroed in on them as the killers of the week? It was pretty easy to spot when the 4th guy who, by the way, had an airtight alibi, mentioned how they all hated the victim and did NOT want to go to space with him.

Finally, Beckett was back on the APB kick this week, instead of BOLO. Remember, writers, APB (All Points Bulletin) was replaced by BOLO (Be On The Lookout) about the time when Pac Man was still hot. I’m one of the old-timers and I’ve never used APB, nor have I ever heard it spoken by anyone other than TV cops.

Followon TwitterSubscribeto RSS Feed
Murder Really Bugs Me…and so do stories that get it wrong!