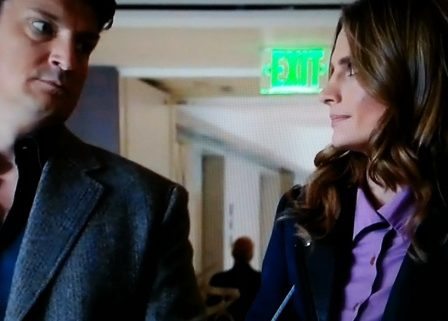 Well, this is my last Castle review from Coastal Georgia. By noon tomorrow we should be deep into a new adventure. We’ll also be homeless once again.

We loaded Denene’s Lincoln Hybrid onto a car carrier earlier today. I was a little anxious about sending the car via carrier. The last time we did the truck driver fell asleep and overturned the entire load of expensive vehicles—a Mercedes, Corvette, BMW’s, etc. Every car was totaled, including ours. Fortunately, the driver was not injured.

Anyway, I should be able to post some sort of article each day. We’ll see. For now, though, it’s time to talk Castle. My part will be brief since I’m typing this while standing (no furniture). So let’s kick this off with Melanie’s take on the episode.

This week’s episode wasn’t one of my favorites, but it did have a few wonderful Rick-Kate wedding preparation moments weaved in that made me smile. Comparing invite lists the lengths of theirs can’t be easy, and with Martha involved, I can only imagine the drama.

The show got off on the wrong foot with Lanie spouting another of her magical guesses at the victim’s cause of death, with him still fully clothed at the crime scene. Of course, she also named lividity as what helped her determine time of death. Really? Again? Why do the writers keep getting this particular fact wrong? It’s so irritating.

I found the rest of the case to be a tad boring, although I did enjoy meeting Captain Gates’ sister. Funny how no one knew the woman existed. I was hoping for more of a cat fight between them, to be honest, but still… I was glad to see them reconcile at the end. I guess Gates is more human than I suspected. I like her more than I did when she first arrived on the show.

While Gates and her sister were squaring off, Beckett, Castle, and company meandered through the ho-hum case, knocking off red herrings left and right. I really thought Berman was the killer. I mean, usually it’s just that obvious. I did not suspect Gates’ sister’s partner. Anybody else?

I can’t help but wonder how long Rick and Kate’s guest list will be in the end. Will they invite everyone and his brother, or keep the list manageable? Will they plan a big wedding, only to have to cancel because Bracken, or 3xk, or some other vicious criminal interferes, and end up with a small, intimate affair? I really don’t know, and Andrew Marlowe isn’t saying.

I’m looking forward to more intense, heavy hitting episodes at the end of the season. Episodes that either keep me on the edge of my seat or make me laugh. The Greater Good wasn’t one of them. Not sure about the 70s-themed episode coming up on April 21 (in other words, no new show next week). I hope it’s good and somehow provides Rick and Kate with a wedding venue. They’re ready to mail save-the-date cards and are whittling down their guest list, but they don’t know where or when the ceremony will take place. Seriously?

Bring on more wedding prep. Lately, it’s been the best part of the show!

I don’t know if it’s because I’m exhausted from move preparations, or what, but the show this week was a real snooze fest. It was the same tired and old story, but with a few new characters. And to top it all off it was BORING. And then there’s Lanie, who not only provided inaccurate science, she possibly destroyed or altered evidence while curled up on the bed beside the dead guy. 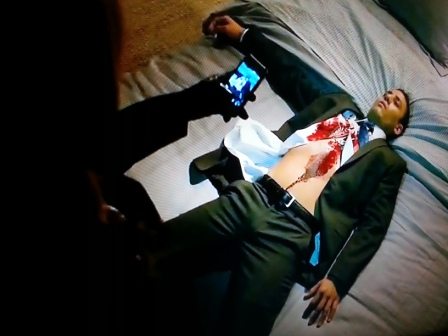 In the photo above, taken at the crime scene, it’s nearly impossible to gather any information about lividity because the dead man is still fully clothed AND, the lividity would be present where? That’s right. It’s on the back, back of legs and arms, etc.,  since those are the lowest part of the body.

– Lanie found a set of numbers written on the victim’s palm. They were written in ink, and they’d started to fade. Lanie miraculously deduced that the victim had written them 3-4 day prior to his death. There is no way she be able to tell when the numbers were written, and by whom. So many factors come into play. Was the victim a palm-sweater? Did he not bathe or wash his hands since he wrote the numbers? Does he not wash his hands?

– Lanie discovered tape adhesive on the victim’s torso. She said, “Looking at the pattern on the adhesive, I’d say he was wearing a wire.” I still say Lanie needs to stop sniffing formalin before wandering outside, because she just may find herself in a “hospital.”

– If the victim had been wearing a wire, and he was, why would he wear it while giving ou incriminating evidence over the phone?

Criminal Minds: Where It Began
Scroll to top