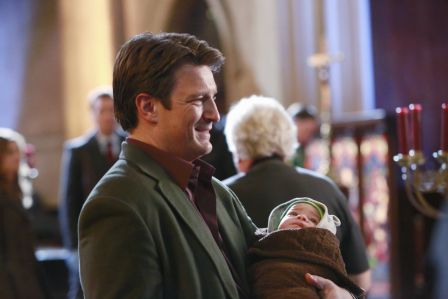 RHD=Ruggedly Handsome Dad (or Really Hot Detective, in Beckett’s case). Either way, this episode may have been a test of the waters to see if viewers would welcome the pitter-patter of tiny Castle feet. Actually, I’d be willing to bet that Good Cop Melanie has already begun knitting a pair of booties with “WRITER” embroidered across the toe areas. Lets see if she’s come back down to earth after witnessing all the mushy, lovey-dovey stuff we saw on the show last night.

Pocahontas, really? That scene, along with many others in this episode of Castle, had me in stitches. I was a bit confused by the case at first, but in the end it came together, too, even though I found it extremely odd. I loved the scenes with Kate, Rick, and Cosmo/Benny (the baby) best, of course. Seeing the two of them with a child was a sneak peek into their future, or so they led us to believe. That alone made me smile.

Kate’s reluctance to hold the baby at first didn’t surprise me, however. Took her a long time to warm up to Rick, and up until recently she’s kept her distance from his family, too. She’s the kind of person who needs time to get used to new people and situations before diving in, and keeping the baby was no exception. I understand where she’s coming from. She was an only child, so she’s never been around babies. They scare her. At least, they did, until she and Rick kept Cosmo.

Their exhaustion the morning after keeping the little guy was so typical, and very funny. Alexis’ line: “How long have I been gone?” when she came to the loft and found Martha feeding the baby and Kate and Rick passed out was priceless. I loved the way they staggered from the elevator later, even though each of them held a huge cup of coffee. So funny.

Poor Ryan never did get the hang of holding the little boy. The kid’s crying made him nervous, and he kept jostling Cosmo around. Only time and experience will help him once his own baby is born. I loved Esposito’s pep talk. He doesn’t have kids and refused to hold the baby, but he was right on target when he told Kevin he’d do just fine.

The scene with Rick and Kate in the dumpster being honest with one another was the best by far, IMHO. I loved that Rick admitted having an ulterior motive for bringing the baby home. Yes, he likes kids, but he also was testing Kate after she told him she “didn’t do babies”. Going it alone with Alexis after Meredith exited stage left was tough, and he doesn’t want to go that route again. He wanted to make sure Kate would be there for their child, and she assured him she would.

I love that they’re talking about having kids, and that the family is getting along so well. Alexis and Rick have made up, and even Pi and Kate’s dad were contributing to Thanksgiving dinner. I’m thankful, of course, that we didn’t have to actually see Pi, but I would have loved a longer family scene at the end — even with Kate dressed like Pocahontas. What a mean trick! She turned the tables on Rick, though, by making him put on the pilgrim outfit, and I loved it. She knows him well, doesn’t she?

All in all, even with the weird case and the Pocahontas get up, I loved this episode. Kate and Rick keeping a baby, talk about having babies of their own in a year or two, and lots of wonderful family moments. Doesn’t get any better than that.

We won’t have a new Castle episode to blog about until January 6th because we have one less week between Thanksgiving and Christmas this year. I hope all of you have a fabulous holiday season. See you next year!

Well, since the case was a bit odd with a totally predictable conclusion, I’m going to skip most of it and only point out the things that might be of interest to writers, and to those of you who might be a tad curious about police procedure.

– Matching the howling wolf tattoo with a tattoo on file in the prison system… Yes, prisons do maintain image files of inmate tattoos. However, I don’t believe a nationwide database of tattoos is in place at this time. The federal government, however, plans to have a tattoo database in operation sometime in 2014. Its purpose is to identify gang affiliations, and for other investigative purposes. The images are gathered at the time of arrest and from inmates already in custody.

– Lanie somehow and magically determined that “due to the severity of the victim’s wounds” he could have survived after receiving the gunshot wounds only for the time it took him to drive twenty blocks. So that’s an official Lanie indicator of time of death? I can see it now. Coroner at scene – “Given the severity of the wounds…well, I’d say that’s a 40-blocker. Fifty, tops.”

– Esposito again used the current acronym BOLO (Be On The Lookout) instead of the antique APB (All Point Bulletin). They’ve finally moved into the current era, and that’s a good thing.

– Use of GPS to track location and movement of cabs, limos, service vehicles (plumbers, electricians, etc.) and police vehicles is commonplace.

– Beckett and crew discover a bloodstain pattern on a wall. The team had it tested and determined the blood belonged to someone related to the baby. But we never saw or heard that anyone obtained a sample from Cosmo. I guess we were supposed to assume they did. And that’s how it would be determined in real life—testing both to determine if there was indeed a match.

– Dumpster-diving for evidence. Dumpsters, especially those near a crime scene, are prime places to search since fleeing bad guys often toss evidence inside. Sometimes cops get really lucky and find the bad guy(s) themselves hiding out among spoiled cabbage, old newspapers, and dirty diapers.

– Ping pong balls. I’m mentioning them only to point out that in days long ago, ping pong tables were available in some prisons as part of inmate recreation. Prisoners in those institutions were allowed to purchase their own ping pong balls from the commissary. Those inmates were also permitted to buy small cans of lighter fluid for their Zippo lighters (who out there doesn’t see the formula for something bad). Anyway, prisoners often used the two as an effective weapon, and they did so by punching a small hole in a ball and filling it with lighter fluid. Then they set it on fire and immediately rolled the flaming orb under an enemy’s bed where it hit wall and set the bedding on fire. Needless to say, it only took proactive prison officials a couple of years to decide selling lighter fluid to inmates was not a particularly good idea, especially since many were convicted arsonists. Duh.

– The final confrontation with the “oh-so-predictable” bad guys was typical TV, especially typical for Castle. During the scene we heard several pistol slides “racking.” Of course, you all know that police officers in the U.S. carry a round in the chamber. Therefore, racking the slide (something TV people think sounds cool, I guess) would only serve to eject the loaded round, leaving the officer with one less bullet. A live round that would then bounce around on the pavement, or into tall grass where it could later be found by a curious squirrel.

Well, that wraps up our 2013 reviews, and as Melanie said, we wish you all a wonderful Thanksgiving. If you’re traveling to Grandma’s house this week, please be careful.