“I knew I should never have partnered with a screenwriter.” ~ Murderer Du Jour

The latest episode of Castle disappointed me yet again. I’m getting tired of this. Lee asked me to blog with him back when the Castle-Beckett relationship first began to heat up because I write romance, and he wanted someone to cover that aspect of the show while he tackled the police procedure. He did not need my services last night. No Beckett equals no Caskett, equals no romance. Not that we’ve gotten much of it this season, but Rick, Alexis, and Hayley, whom I still cannot accept as part of the show, in L.A., with no explanation of Kate’s absence? Pu-leeze.

To top it off, we had to endure the silly back and forth between Ryan, Esposito, and Lanie that ended with her going after the boys with a fire extinguisher. How juvenile is that? Where is the show we know and love? Because it certainly wasn’t on last night.

My friend Donna, who watches Castle every week almost as religiously as I do, texted me after the episode saying: …they’ve completely forgotten the style and charm that set this show apart to begin with. Unfortunately, she is correct. Another fan said on Twitter: …the show I fell in love with was abt a writer and his muse solving crimes. Not Castle PI w/Hayley and Alexis. She’s right, too, and I retweeted her. Sigh.

The preview of next week’s show (episode 15) shows Kate telling Rick know she “can’t do this anymore”, and I believe she means she’s had enough of living apart and their stupid fake break up. All of that ridiculousness, plus LokSat and the storyline involving Rick’s missing time, is supposed to end by episode 16. So maybe, just maybe, the show is about to get back to normal.

I certainly hope so.

The higher ups at ABC haven’t renewed Castle yet, probably because of sinking ratings, and I hope they wait to see if Rick and Kate getting back together for good helps before they give the show the ax. I’d like for them to give us at least a short season next year to tie everything up, and maybe even give us a Caskett baby. Only time will tell.

Give me a minute to stop shaking my head. For now, though, I’m hoping the rapid side-to-side movement will erase all memory of what I just watched.

Why, Castle? Why’d you do it??? Why’d you go there? Haven’t you seen enough TV shows to know that leaving your hometown, with your entourage in tow, as an effort to generate interest in your show is an action that often induces the final blips on the heart monitor before flatlining? Do you not recall Fonzie’s shark-jumping, the Bradys in Hawaii, and the Clampetts in England. I’m sort of expecting to see some strange little kid showing up as Castle’s cousin, a youngster who suddenly moves in to assist with further tanking the declining ratings (Cousin Oliver on the Brady Bunch, homeless kid Luke on Growing Pains, and Stephanie on All in the Family).

Okay, enough of that. Let’s move on to the meat of my review, the police and forensics (this will be easy).

1. Lividity Lanie – Stupid stuff as always, and even more so this week.

Lane, bless her heart*, was able to determine the exact make, model, size, color, and chemical composition of a murder weapon—a hunting knife—merely by looking at photos of dead people. WHAT. THE. *&%!.

2. Police officers running a background check for any purpose other than a police-related issue is taboo. I’m not saying it hasn’t been done before, because it has. However, the act has resulted in disciplinary actions, including the loss of jobs.

3. Strange people wandering in and out of crime scenes does not happen, especially in well-organized departments.

4. Remember the screenplay Castle saw where the killer wrote “THIS IS STUPID” in the margin? 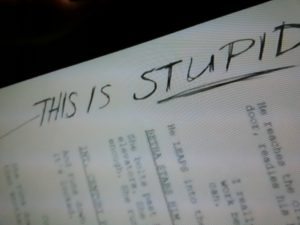 Well, that was pretty darn ironic because while taking notes earlier during the episode, this (below) is what I scribbled about the scene where Hayley (why is she in this show??) told her far-fetched story of being Castle’s secret guardian. 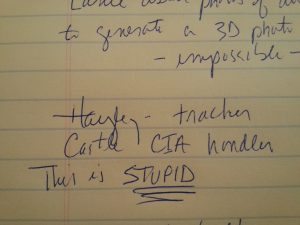 Therefore, based on lividity, I believe that’s all I have to say…

* Bless your heart – a Southern phrase used as a polite means to deliver an insult. Transforms a positive comment into a negative. “Her baby is really cute, bless her heart.” In the region of the South where I lived and worked for many years, this typically means the little one is basically stomp-down, butt-ugly.” 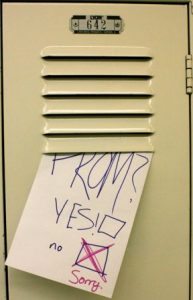