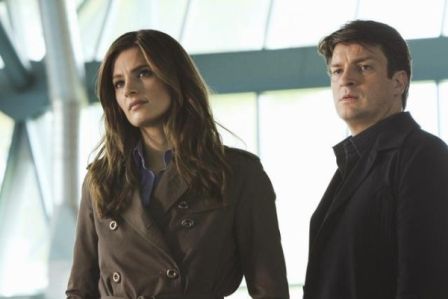 Sure, Lanie was on her usual Magical Mystery Tour, but even her foolishness couldn’t stop the fun in this week’s episode. After all, Poker Night was back and that’s always cool. And Castle even taught his fans how to break into a car using a blood pressure cuff. Yes, that is possible. 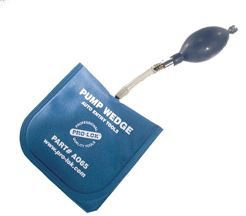 In fact, a special inflatable device called a pump wedge is actually designed specifically for the task of opening locked car doors. The inflatable bladder in the pump wedge is a bit sturdier than the one’s in the medical use devices. Oh, and a thief could easily pick one up for less than $40 (or they could steal one). Okay, back to the show. 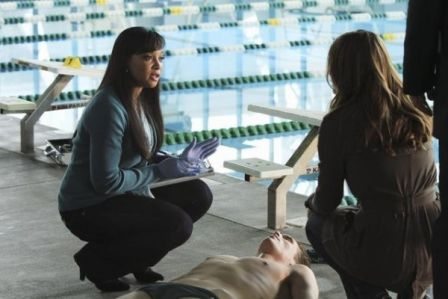 Let’s get Lanie and her goofiness out of the way.

– She stated that someone placed a caustic substance over the victim’s mouth and then dumped him in the pool to drown. First of all, she’d have no way to determine that information in the field. Sure, there were blisters around the guy’s mouth, and chlorine exposure does cause that sort of thing, but how would she know the swimmer didn’t drink chlorine (or battery acid, or…) as a means of committing suicide? And she definitely wouldn’t know someone had dumped the guy in the pool to drown.

– Lanie was also pretty quick in determining the time of death by calculating the water and body temperatures.

Our good friend, author Jonathan E. Quist, wrote last night to fill me in on a few chlorine details. Here’s what he had to say:

When Castle and Becket confront the killer at the end of the episode, Beckett comments that they searched his hotel room and found his shirt “with chlorine on it–pure chlorine, the kind that killed Zack.”

First, basic chemistry, “pure chlorine” is a gas. If it was on the killer’s shirt, then they cut the hazmat cleanup scene. But no lab tech would have told Beckett “pure chlorine”. Well, except Lanie, perhaps.

Assuming they meant undiluted liquid pool chlorine, which has about three times the concentration of sodium hypochlorite as home laundry bleach, then a) the shirt would be gone (it would have holes in it before the last day in this timeline, so why is it still in the hotel room?) and b) the killer would have had chemical burns on body parts which were visible several times during the episode.

An Olympic-sized pool facility would likely be using chlorine gas as the sanitizer rather than liquid, though that is not 100 percent certain.

I give Lanie credit- she said “we won’t know for certain until we get him back to the shop”, but the body had been floating in a pool for several hours- there’s no way she could have determined the burns on the victim’s mouth were from a “caustic liquid”.

Yes, these may be geeky details, but they’re known to anyone who operates a backyard pool.

Thanks for the details, Jonathan.

Back to my ramblings…

– Lanie’s morgue is a one-stop shop. Why, this week she even tested the liquid in the vials found in the dead guy’s apartment and determined that they were indeed steroids. It would have been nice to have this sort of fantastic service back when I was solving cases. Instead, we actually had to use the services of laboratory scientists who analyzed chemicals and other substances. You know…chemists and other professionals. Something else really odd happened then, too. The medical examiners basically conducted autopsies and left the testing of “things” to the lab folks, since that wasn’t something they were trained to do. 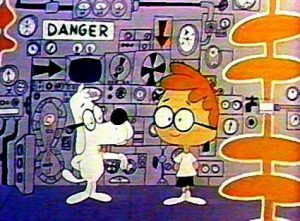 Sure, M.E.’s use lab findings to help them determine cause of death. But they don’t stop mid-autopsy to run something through the Wayback Machine.

– Beckett interviews a murder suspect, a grown college man, with both his attorney and his father present.  Well, she shouldn’t have allowed his father to be in the room during the interview. And an attorney would never allow his/her client to to be subjected to that type of questioning unless he’d already been charged and had worked out some sort of deal with the prosecutor.

– The poker game was fantastic. And, like many of you, I’ve met both Dennis Lehane and Michael Connelly, so that made the scene even more fun.

Well, I thought the show was entertaining The criminal case was weak, but that wasn’t the focus of the episode. And I’d better leave the mushy stuff for Melanie to address.

I did ask the applause bears what they thought of this one, and here’s their reaction. 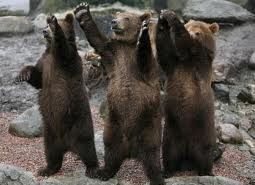 Oh, my favorite Castle line from the show:

“He’s a writer. How much trouble could he possibly be?” 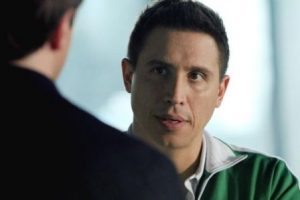 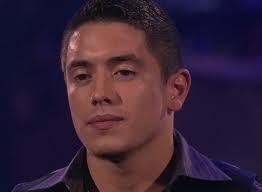 One more thing, and this is for those of you who watch American Idol. Is it just me, or is Stefano moonlighting as a swim coach?

Melanie…are you there? I know you loved this one.

Jealous Castle? Oh, yeah. Who knew the author would get so upset when his protégé asked Kate for help with the case in his next book? Seeing Rick being eaten alive by the green-eyed monster totally made my night. And after that last scene, my little shipper heart is going pitter-patter. 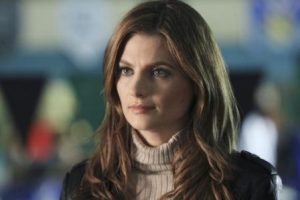 The early part of the episode was filled with great banter and many of Kate’s little hidden smiles at Rick’s antics. Then Alex showed up, and jealousy came into play.

• Rick complained to Alexis and Martha that Alex was trying to “steal his muse”.

• He tossed back the muffin he’d gotten from the basket after learning Alex had sent them to Kate, and liked the card that came with the muffins even less — namely because it said, “Thanks for last night.”

• Alex sent Kate a text about getting together again the next day, and Rick stopped in his tracks in the middle of the sidewalk. The look on his face spoke volumes.

• Montgomery mentions that Alex never seemed to tire of watching Kate, much like Rick, and that pushes all of Rick’s buttons. Jealous, much? Oh, yes. 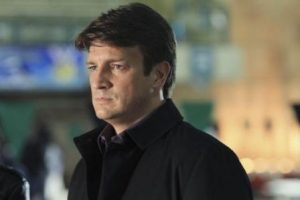 • For revenge, Rick uses poker night with fellow authors Michael Connelly and Dennis LeHane to lure Alex away from Kate the next night… and helps them rake the kid over the coals. What an initiation. Tee hee!

The best part of the episode to me, though, was the end. Can you say Major Shipper Moment? With a knowing twinkle in her eye, Kate pushed Rick about being upset about Alex wanting to spend time with her until he broke and admitted he was jealous; that he didn’t like sharing her with another writer. Finally, one of them revealed his true feelings!

And to my surprise… Kate agreed to not see Alex anymore. She claimed she was now a “one writer girl”. Wow. This was epic! And she even gave Alex to the boys for good measure. He didn’t seem to mind hanging around with Esposito and Ryan, either. Great touch.

We got a dose of much needed continuity, when Kate quoted back Rick’s line from the ambulance in Knockdown: “Always.”

But the look after that between Rick and Kate… Did I mention that my little shipper heart went pitter-patter? All in all, I loved this episode. Not because of the case, certainly. (Case? What case?) But because of Rick’s jealousy and the end that made me squee like a little kid. Thank you, Andrew Marlowe.

Oh, and FYI: This is the last new episode until May 2 — and the delightful May sweeps. The next three episodes that will wind up season three should prove to be even more memorable. Can’t wait!

Want to drive a patrol car or an ambulance? Ever wanted to pepper spray someone? Are you curious about cyber crimes? Bio-terrorism? Serial killers? Want to see and use real-life CSI tools and equipment? Have you wondered what it’s like to be in a gun battle? Then you’ll certainly want to attend the 2011 Writers’ Police Academy. 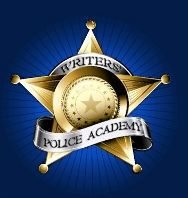 Followon TwitterSubscribeto RSS Feed
Fun At The Writers’ Police Academy: Were You There?

Intimate Partner Homicide: He Would Never Really Do It…Right?
Scroll to top