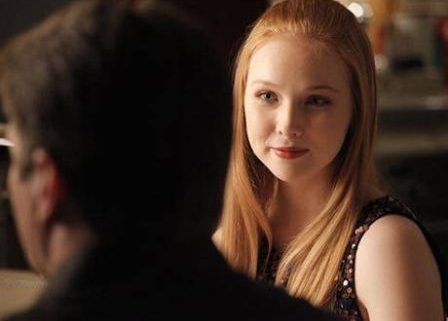 As always around this time of the season, Castle writers go for an over the top action and suspense-filled episode. In the past, we’ve seen bombs, Beckett shot by a sniper, Captain Montgomery killed, a big bank robbery scene, and even a very large tiger with its taste buds set on an Espo-Beckett buffet.

Personally, I think the show works best when the cast is in full blown humor mode. It just never seems to work when they go for mega serious/save the world in an hour. However, last night’s episode was better than the usual “world’s coming to an end” format. Sure, coming from a cop’s perspective there were plenty of holes in the story. Overall, though, it was an okay episode. And it featured Alexis, which was sort of nice for a change. And, I’m sure Melanie was absolutely giddy with all the Castle-Beckett hold-me-touch-me-love-me-make-it-better moments. So let’s see what she has to say. Melanie…

Target blew me away. In this super-dramatic episode, Alexis, Rick’s daughter, and her friend, Sara, were kidnapped. The tension and emotions in this one had me on the edge of my seat the entire time. I’m used to Nathan Fillion joking around on Castle, making me laugh, but tonight he made cry in his portrayal of Rick in terrified parent mode. He was simply phenomenal. His range of emotions crossed the human spectrum and zeroed in on my heart. I ached for Rick.

Any parent would be devastated in that situation and would do whatever it takes to get their child back. I don’t know what Rick did to the driver of the van to get info out of him, but I don’t care. I would’ve done the same thing.

Not only did Nathan do a great job portraying Rick’s anguish, but Susan Sullivan (Martha) was also superb as Alexis’ overwrought grandmother. Overwrought, but also strong. She held down the fort at home so Rick could help the team search for Alexis.

I loved the hug Kate gave Rick when they first learned Alexis had been kidnapped, even though she knew Gates was probably looking on. Shows how much she loves him. And later on, as they waited to hear from the FBI team going after the missing girls, Kate holds Rick’s hands in plain sight while he tells us the emotional story about Alexis’ birth, and Gates turns away. She definitely knows about them now if she didn’t before, and like Kate, I don’t care. I don’t believe their relationship will be a problem in the long run, because Rick isn’t employed by the NYPD.

Right now, of course, Rick and Kate are too focused on getting Alexis and Sara back to worry about that. I found it hard to believe Kate and the boys found that driver so fast, but maybe it’s possible. I’ll let Lee worry about that one. The rest of the episode I found believable. At the end, the scene when Alexis broke free long enough to learn she’s in Paris seemed more like a scene from a movie rather than network TV to me. Very well done, Mr. Marlowe!

Amazing episode. I can’t wait for next week.

Well, I can’t say that Melanie and I share the same enthusiasm over this episode. For me, it was just okay. Sure, Fillion was at the top of his game, showing a vast range of emotions. I’ve said it before, though—the guy could do an entire episode without speaking a single line. His facial expressions tell a story as well as many actors do with page after page of dialog. My problem with this episode was not really a problem, as far as entertainment TV goes. Remember, I watch Castle at the request of mystery and suspense writers. Therefore, I’m looking for problems with the police procedure. The “is that realistic” scenes.

First of all, I’m still liking Lanie’s remarkable transformation. Sure, she still says things that can’t and wouldn’t be realistic in the real world, but she’s now making those “information dump” comments sound, for the most part, believable.

Next up…Gates. As you know, I totally dislike this character, especially so when the crew addresses her as “sir.” However, last night, she was in captain mode—in charge, firm, and absolutely believable, which was a fantastic switch from the goofy, keystone cop they’ve had her portraying in the past few episodes. I still don’t like the character, though.

Of course, the FBI guy swoops in and takes charge of the case. Although, this time he was invited and the writers seemed to get this one right…until the raid on the farmhouse. That, my friends was everything wrong that could possibly be wrong. From the FBI suit-wearing, helmetless agent leading the raid/entry team’s forward charge (they wear that protective gear for a reason, you know) to the team storming the place without conducting any pre-raid surveillance, etc. When you’re standing at the suspect’s front door is not the time to discover cameras and motion detectors. And, an entire team, all running single file up a driveway like baby ducklings following mama to Playtime Lake is, well, not good for one’s future, if “one” plans on hanging around this life to see tomorrow. This entire scenario was just plain dumb.

There was a scene where the bad guys’ getaway van was discovered with a fair amount of blood on the rear floor of the vehicle. Lanie tells Castle to hang on a moment while she types the blood to see if it was Alexis’. Yes, that is possible with the right kit containing the proper reagents. And, that’s exactly what Lanie used to conduct the test (well, it’s what they wanted us to think she was using). So good for the director, and Lanie.

Okay, the scene where Beckett leaves Castle to “question” the uncooperative, bleeding van driver. The thug tells Castle he can’t question him. Castle politely says, “I’m not a cop,” and does whatever he did to make the guy scream like a little girl at a ghost-story-telling slumber party. Well, as far as Castle not being a cop so he doesn’t have to play by the rules…well, that’s not exactly true. It’s been firmly established that Castle acts as an agent of the police, which does place him under the umbrella of having to play by the rules and follow the same laws and rules that apply to cops. So whatever Castle did to the bad guy was totally illegal. BUT, would I have done the same thing? Sure, in fact, I might’ve done a lot worse to the guy who was responsible for my daughter’s disappearance.

Also, I have to disagree with Melanie on one point. It would make a difference if a supervisor knew that Beckett and Castle were romantically involved. The department should never allow a “volunteer civilian boyfriend and cop girlfriend” to work together all day and night. Too much at stake, including allowing personal feelings getting in the way of solid police judgement. And a great example of that is the situation with Castle and the screaming thug (sounds like the title of an old Perry Mason episode – The Case of the Screaming Thug), a situation Beckett allowed to happen due to her personal feelings about the people involved in the case. A lawsuit waiting to happen. Or worse.

Finally, I’m not even going to mention how totally dumb and predictable it was for Alexis to pick the lock and make her escape. Dumb, dumb, and dumb.

Now, I have a question for all of you. When I use my cell phone to take photos, I’m looking at the screen (which is where the images are displayed) which means the lens is pointing away from me. So how was it that Alexis and Castle were able to Skype and see each other at the same time? Do some phones have a lens and screen on the same side? Or, do you have to constantly flip the phone around between comments and viewing? I’m confused…as usual.

Anyway, overall, this was a good episode. Just very predictable. By the way, I actually guessed Alexis’ location. I told my wife that she’d see the Eiffel Tower when she went outside. There were no clues, just a really lucky hunch, I guess.

So, until next week…au revoir, mes amis.