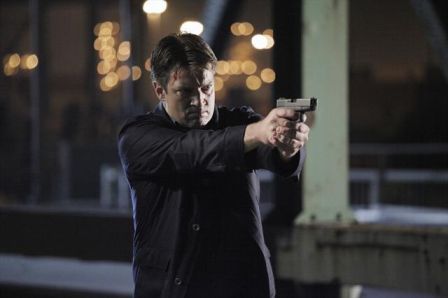 I was floored last night…stunned, actually, when I heard Lanie say some things that made sense. And then she said more. I turned to my wife in disbelief. Could this actually be happening? Had the writers finally trash-canned the crystal ball and Ouija Board? Well, as fate would have it, I wouldn’t see much more of the show because my service was interrupted numerous times during the hour. So much so, that I really never knew what was going on.

Since this was a rarity (Lanie speaking in a language that’s normally foreign to her, as a medical examiner), I was desperate to see more. So I hit the pause button and called technical support, where I was on hold for over 30 minutes before connecting with a very polite young man in Montana who claimed he’d have my issue corrected in a flash. Forty-five minutes later, though, he’d somehow managed to fix it so that I was unable to see anything at all, totally deleted my history and recorded shows, and he’d wiped clean my favorite channels list.

Now, I’m a man with the patience of a…well, let’s be honest, I have no patience, especially when it comes to my TV. I was livid. Therefore, taking matters into my own hands, I finally managed to return the service back to its original state of disrepair, but it was too late. The show was over and all I had to watch were bits and pieces of what looked like a pretty decent episode. So, I’ll give you my take on what little I did see, after Melanie has her say. So here goes…

Wow! This episode wasn’t nearly as light and fun as the others so far this season. No, it contained much more angst. I was totally intrigued by the storyline, however, even if parts were hard to watch. I thought it was tightly written and well done… at least until the end, when the search for Tyson, better known as 3XK, a villain we first met in season three, was tied up just a little too quickly — except, of course, for the one major loose end of his missing body. If this had been a two hour episode, I’m sure they could have drawn it out more, but they didn’t have but about forty minutes to work with so I think they did a fabulous job.

The show starts with a little light banter between Kate and Rick, but soon morphs into a terrifying mystery that baffles Kate. Someone is framing Rick for murder… or are they? Is he really guilty? All of the evidence points to him, and at one point even she seems to doubt him. I think she was more frightened than anything, and she had to wonder how well she really knows him. Thank goodness she stood by him. But wait… I’m getting ahead of myself.

Tyson did an incredible job of framing Rick. For a while, I didn’t see how he’d get out of it — and I don’t think Kate did either, even though she so wanted to believe it. Those emails Rick supposedly exchanged with the dead woman threw her for a moment, and I ached for her. The scene between her and Lanie, when Kate cried, broke my heart. Then it hit me: Kate told Lanie about her and Rick, and Ryan told Esposito. So the only ones in the dark about their relationship now are Gates — if she truly doesn’t know, and I’m not convinced she doesn’t — and Kate’s dad, unless she’s told him off camera, of course. I’m so glad that secret keeping theme is over. Yay!

Back to the case. I found Tyson’s visit with Rick in jail to be so chilling, the hairs stood up on my arms. Such a creepy, creepy villain. He left Rick and Kate in quite a quandary. I was heartened when Kate believed Rick when he told her about Tyson’s visit, and I loved the way she fought for him, even against that hardnosed ADA. Stana did a great job portraying Kate’s fear, and I think Nathan’s dismay and fear were palpable as well.

Rick’s clever escape was classic Castle. I loved it! The scene with Kate and Rick in the library was so sweet, and so them. Kate didn’t want to lose what they had together, and she let him know she was in his corner… always.

I don’t believe Tyson is dead. No, the writers let him slip away so they can bring him back later to terrorize our dynamic duo again in the future. Just so he doesn’t succeed in killing either one of them or someone they love, that’s okay with me. He’s a worthy adversary.

Rick and Kate have something special between them. The fact that Rick’s alleged guilt couldn’t break them apart attests to that. Now that the boys and Lanie all know the truth, I think the show will get even better. Can’t wait for next week’s episode at the sci-fi convention. That should be another fun one. Bring it on!

Thanks to the poor TV reception, I began watching this episode when the murder victim was attached to the ceiling. For starters, I ask you to think about this scene for a moment. Okay, let’s say the woman weighed 110 pounds, and she’s dead. We all know that dead people are of no help whatsoever when it comes to moving them from place to place. Simply put, they’re dead weight…like a sack full of heavy, firm, Jello.

Well, the weight of this dead woman—this sack of uncooperative Jello—was equal to the weight of twenty-two very limp 5 lb. bags of sugar. Can you now imagine holding 22 bags of sugar over your head, with one hand, while using a coil of barbed wire and nails or staples to firmly attach them to the ceiling? Oh yeah, all of this must be accomplished using only your free hand to unwind the coil of wire, cut the wire, hammer/staple etc. Believable? Certainly not.

– Enter Lanie – She states that lividity and pooling (lividity is the postmortem gravity-induced pooling of blood in the lowest portions of the body) indicated the body was hung from the ceiling after she’d been killed. Well, aside from the fact that using both terms, lividity and pooling, was a bit redundant, she was absolutely correct. Had the victim been wired to the ceiling before lividity became fixed (permanently staining the flesh a purplish blue-black color at the lowest points of the body), the full front of the body would have presented with lividity. Lividity was not present, so good call, Lanie.

However, the whole bit about Lanie discovering the killer had worn gloves was totally wacky. Lanie said she’d discovered talcum powder on the victim’s body, the same kind of talc found on surgical gloves, or the gloves worn by CSI’s. Remember, everyone, medical examiners are not laboratory scientists/chemists who spend hours peering into microscopes comparing compounds and chemical compositions of dust and powder. That’s a job for the folks in the lab, not the medical examiner. Besides, discovering minute traces of glove powder on a body is a huge stretch of the imagination. And then to be able to determine the brand of glove from there…yeah, right.

– Gates made a pretty nice statement last night when she said, “…we’ll follow the evidence, no matter where it leads.” That’s how it’s done in real life. You take the evidence you have before you, and you follow it to its source. If that source just happens to be your favorite brother-in-law, so be it.

– I don’t think I need to say this, but I will just in case…no police officer would allow a murder suspect to investigate his own case. No exceptions.

– Unfortunately, I missed most of the Tyson/Castle part of the show, including Tyson’s jail visit with Castle, and Castle’s jail escape. But I did get a chance to see Beckett lose her gun to the bad guy, as usual. You know, I think Gates needs to start holding a pre-shift meeting each morning where she can safety-pin Beckett’s gun to her chest. You know, like when mothers pin mittens to their kids’ jackets so they won’t lose them. Honestly, this gun-losing schtick had grown old two seasons ago. At least Beckett and Castle weren’t kidnapped in this episode.

So, what did you think about Mr. Supernatural/Tyson taking 10-15 rounds to the torso and still manage to get away? Sure, they’re going to say he wore a vest. Still…

I almost forgot…I’m quite pleased now that the romance secret is out. I worried they’d jab that in our eye each week, like they did with the “I love you, do you love me,” thing that went on forever. After all, Beckett’s consistent gun-losing nonsense alone is enough to make cops all over the world say…”AARRRGGHHHHH!!!.