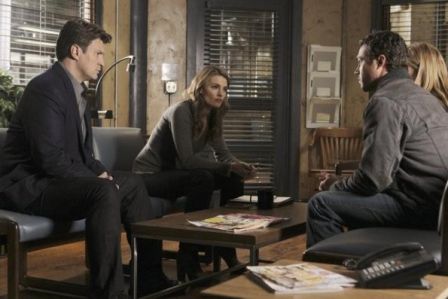 What a difference a week can make. Beckett’s back in charge and she even managed to hold on to her gun for an entire episode. And miracles do happen, she wasn’t kidnapped, not even once.

Espo and Ryan were back at work being detectives. Castle was funny again. Alexis and Mama Castle were…well, I’m not sure what that mess was all about except to serve as a means for Castle to introduce the “bow theory.” And Lanie was back doing what she does best… 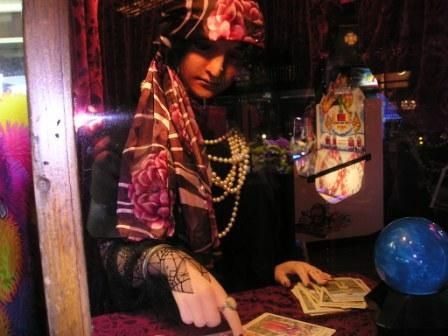 So this week’s episode was all about fairy tales and, between you and me, Lanie probably felt very much at home since a good deal of her forensics information comes straight from the pages of Grimm. Well, with the exception of what she gets from the lady above and from this guy… 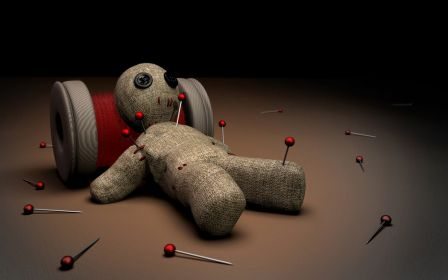 You know, I was ready to stick a pin in my own eye when Lanie said, “She (the victim) was running from something. She has dirt on her feet.”

Now that was a scientific conclusion if ever there was one. Hmm…make a note, writers and future jurors. Everyone with dirty feet has been running from something. 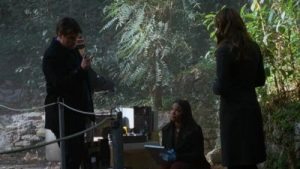 – Lanie did make one true statement. “…I won’t know exactly what killed her until I get her back to the morgue.” Yes, Lanie, that’s where the process—the autopsy and learning what happened—takes place. In the morgue, not from thin air. Like…knowing the hair found on the victim’s arm was wolf hair. What? To learn this, she’d have to test the hair specifically for wolf using primers to amplify a DNA sequence that’s specific to a wolf. Now, how many times do you think that happens in the real world? “I found a hair on the arm, doctor. I’m pretty sure our New York City victim was killed by a wolf, so that’s what I’m testing for, first.”

– Based on the depth and length of the gashes, looks like the wounds were made from one claw. First of all, how’d she know a claw made the marks?

– Ketamine and Oxycontin were used to sedate/kill the victims in this episode. Now, I understand the reason for using the combination in the first murder. That was explained—Ketamine was injected but didn’t quite do the job so a second injection of Oxycontin was used to finish off Red Riding Hood. That’s all fine and good, but why would you repeat the process a second time knowing it didn’t work?

Of course, you know that when people are attacked they’ll most likely fight back so, wouldn’t you want to eliminate the need of having strategically place a needle directly beside another needle mark while someone is doing their best to bash your brains out of your skull? After all, the fight to survive is fierce. Besides, an injection of either of these drugs wouldn’t render someone unconscious the second the needle hit the flesh. People use these drugs as pain relievers (one for people and the other for animals). They abuse both drugs as a means to get high, not as a sleep aid.

Besides, the victims were fully dressed, in costume, positioned on their backs, when Lanie “predicted” the needle marks on their backs.

Time of death was between five and seven. That was great, and that was all that’s needed at the time. Stop there Marlowe and you’ll be fine. Otherwise, poor Tamala Jones sounds really goofy. I feel sorry for her at times. I really do.

– Again, Beckett is back! She’s in charge, doling out orders and making decisions without having to bat her eyelashes and wiggle and jiggle to get Castle’s approval before she makes a move. Repeat after me…Castle is a civilian. Beckett is the cop. Castle is a civilian. Beckett is the cop. Anyway, is was good to see the old Beckett back at work this week. Don’t you think she’s more appealing this way than when acting like a gun-losing, high-heel-wearing, insecure, supermodel wannabe?

– The entire blackmail case was very weak and not very well thought out by the writer. Why would people pay $50,000 for a crime they didn’t commit, as suggested by the final victim/killer. It was obvious that she was the killer, by the way.

– Don’t you love how security cameras are always, always, always in the right place at the right time with absolutely perfect full face shots of all suspects and witnesses. In real life, we normally see a grainy, black and white shadow where the face is supposed to be, making the guy look like some weird character from a horror movie.

Oh, and this red herring guy, Darren…didn’t work at all. We didn’t hear enough about him to make us believe he was a killer. Besides, the boilerplate script told us he wasn’t the guy. 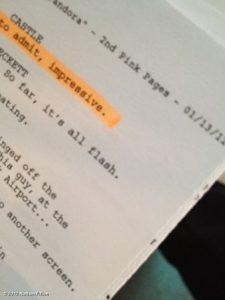 12 parts to a Castle script:

3. Team splits up to locate clues and witnesses.

4. Espo and Ryan pop in with exactly what Beckett needs to…

5. Kick in a door to the wrong place.

(insert kidnappings and gun-losing, as needed).

6. The red herring is introduced, usually by glaringly shoving him/her in our faces.

7. Beckett and/or team interviews red herring. He didn’t do it.

8. Castle magically discovers the identity of the real killer

10. Everybody smiles and back slaps all around.

Anyway, back to this episode. 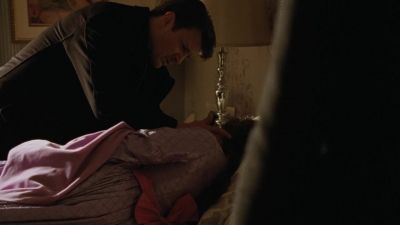 – Castle notices the bows are tied differently, and he sees the odd one when walking into a room where he thinks the woman on the bed has been murdered and the killer could possibly be inside the home, hiding??? Where are his eyes focused now (above)? Where would his focus be when he first saw the woman on the bed? On the bow? Probably not. Besides, what would have drawn his attention to the bows on the other victims? That’s something that would (maybe) have been noticed later when searching for clues while comparing photos.

But, even with the usual Castle goofiness, this episode was much better than the stuff we were subjected to over the past two weeks. Actually, I’d like to forget about those two episodes. Maybe flush them into the place where bad things go. Things like Christina Aguilara’s rendition of The National Anthem, and Ashley Simpson’s SNL performance.

Yes, the crew was back this week and the episode was fun and quirky. And, of course, after four long years of not even breathing heavy and Marlowe telling us to be patient (I’ve seen human corpses and dead snails move faster than this relationship), there was this… 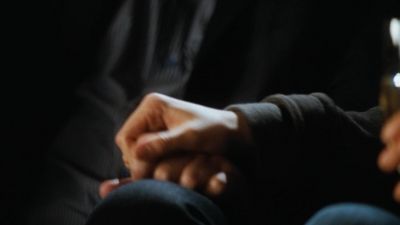 Yep, the relationship is moving right along…

Melanie, what’d you think of this episode? Better than last week?

Well, after the convoluted fiasco last week, I was thrilled to see the promos for this one. Once Upon a Crime deals with a killer with a nursery rhyme theme — not anything to laugh about, unless you consider the gallows humor — and this episode brimmed with it. A dead Little Red Riding Hood brought out all sorts of Big Bad Wolf jokes… and yes! The banter was back! Not only between Rick and Kate, but also between Rick and Martha, who is putting on a strange one person play, and Ryan and our dynamic duo. This was classic Castle, and I loved it.

Sure, Lanie spouted off a few crazy notions, like claiming lividity had something to do with determining the first victim’s time of death, or that the second victim had received injections like the first one had — while she was still on the ground fully dressed at the crime scene. But the excellent banter allowed me to ignore those glitches. 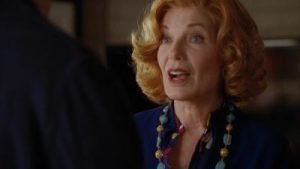 Even better, Martha called Kate to invite her to her play at the loft, and then Martha told Rick, “You should make a date of it.” Maybe we should call her Matchmaking Martha. Rick’s response to all this? He pulled out the scotch. Hilarious!

We got more Ryan and Esposito this week, too, and they had a priceless scenes in the old lady’s apartment when Ryan freaked out about the dolls. I’ve got to admit, I thought they were creepy, too. So funny.

We also got some movement on the Rick-Kate front. When Kate got mad about the case at one point, Rick said, “You get cute when you get angry.” And unlike in earlier seasons, Kate didn’t get upset at all. She just smiled. Rick backed off anyway, of course, saying, “But not when you’re angry at me.” I love seeing progress in their relationship.

Then we got a bit of foreboding when they discussed the secrets the killer’s victims had been hiding for seven years. Kate said, “Secrets are like time bombs.” And Rick added, “Yeah… they explode.” Yikes! Yes, they are each still keeping secrets from each other — Kate lied to Rick when she said she didn’t remember his I love you after she was shot, and he hasn’t told her he’s still digging into her mother’s case and Kate’s own shooting — and we know that sooner or later those secrets will come out, with explosive results.

I was disappointed when Rick realized they’d arrested the wrong killer and they had to leave Martha’s play to finish solving the case, a simpler puzzle than we’ve had lately, but with a nice twist. A case I actually enjoyed hearing about. 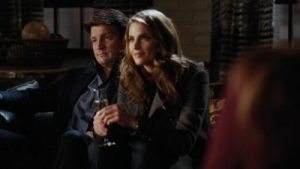 Then they went back to the loft for Martha’s encore performance! Just Rick, Kate, Alexis, and Martha’s boy toy playwrite. How intimate and sweet. Caskett perfection, with Kate sitting on the couch next to Rick — and then she took his hand! Yes, I squeed! After the bones we’ve been thrown lately, this was true progress.

Now, we have a two week hiatus thanks to March Madness… and I know which episode I’ll rewatch during the break. This one! I loved it.

Followon TwitterSubscribeto RSS Feed
Go Directly To Jail: Take A Walk With Me On the "Inside"

Southland: Fallout – A Review And Recap
Scroll to top