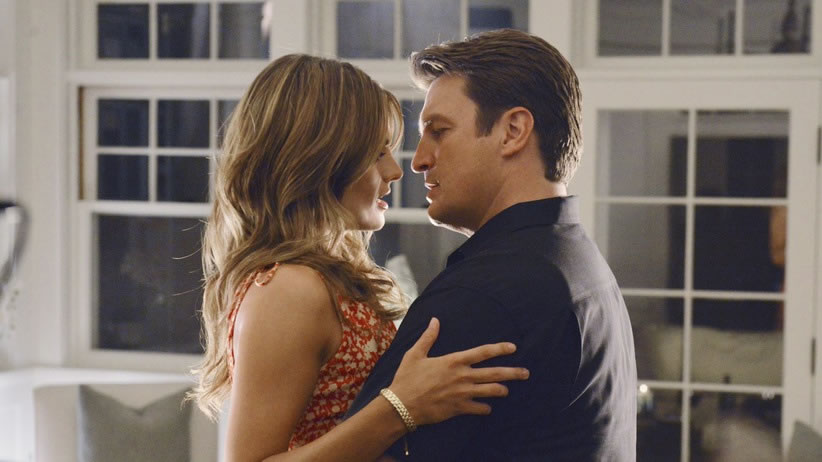 A romantic weekend in the Hamptons. Well, that was the plan. But the idea was quickly overshadowed by a murder that Castle was determined to solve.

In addition to the murder, though, the newly formed “Caskett” was forced to work extra hard to keep their relationship a secret. However, add a bungling, goofball police chief and two clueless detectives (Ryan and Espo) and, well, the romance was forced to take a backseat to yet another loosely-woven crime plot.

This one was a tiny bit odd for me, making me curious what my review partner, Melanie Atkins, thought of the episode. Were the candles, kissing, and lovey-dovey moments enough to satisfy a true shipper’s needs? Or, did this much-anticipated episode fail to deliver.

Melanie, were you happy with what you saw last night?

A romantic weekend in the Hamptons. Blue skies, perfect weather, a gorgeous house… what could go wrong? Nothing, right? Yeah. Uh-huh. This is Caskett we’re talking about (yes, they came up with that name during this episode — a funny moment, because that’s the name Castle fans came up with ages ago).

When the story opens, Kate and Rick are still trying to keep their relationship a secret to everyone at the precinct. I’m already a bit tired of this storyline, but I understand why they’re doing it. At this point, Ryan and Esposito are intrigued that Kate’s admitted she’s going away with her new boyfriend for the weekend, and Castle claims he’s going to the Hamptons to write. Why the boys don’t put two and two together right then, I don’t know. I mean, come on! They’re detectives… and they both know how Rick feels about Kate, and that she likes him, too. Doesn’t take a genius to guess they’re together now. Still, Ryan and Esposito are dense and don’t get it.

Kate and Rick arrive at Rick’s huge Hampton’s house, and Kate is in awe. No, make that overwhelmed. Overwhelmed by the sheer size of the place, and concerned about the other women Rick has brought there in the past. She asks him about it, instead of running and hiding like she would have done in the past, and that made me smile. He reassures her by saying, “I’m not gonna deny that I’ve brought other women up here, but… none of them were you.” A nice, touching scene, but I would’ve liked a kiss. Please! They’re off on a romantic weekend. Give us more!

That evening, they head to the pool, and Kate drops her robe to reveal she left her swimsuit behind — a fun, sexy scene ruined when a man with a bullet wound staggers out of the shadows and splashes into the water. 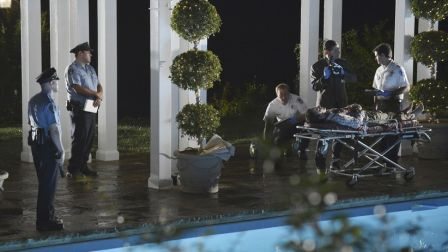 That pretty much set the tone for this episode. A lot of near misses in the romance department, and a crazy case run by an incompetent local cop. Once he learns Kate works homicide for NYPD, both she and Rick are sucked into the mystery, and Rick won’t rest until he gets answers. This really bothered me, because he’s in love with Kate, and I wanted him to concentrate on her instead of the case. Sure, he’s a mystery writer who loves a good puzzle, but he’s also a man away for the weekend with a beautiful woman. ‘Nuff said.

While all of this is going on, Ryan and Esposito are busy interrogating Kate’s old boyfriends to try and find out who she’s gone away with for the weekend. They check out Josh first, then Demming and Sorenson. That goes all the way back to season one. And they still can’t put two and two together and get four? I wouldn’t want them investigating a case for me.

Kate and Rick finally manage to solve the Hamptons case, with a little help from NYPD, after being arrested and homing in on several suspects who turned out be not guilty, including a meth addict, a mobster, and a man who runs the local marina. I didn’t concentrate on the case too much, however, and I didn’t really care who killed that guy. I spent all my time trying to keep up with the numerous almost-moments between Kate and Rick. Sure, they kissed a few times the first night while Rick was obsessing about the man in the pool, but nothing really substantial happened on the romance front until the very end of the show. Rick was just too captivated by the case. Once it was done, Kate had finally had enough of being pushed aside by the mystery, and she pressed the issue. I loved the fireplace, the candles, and that gorgeous bedroom… very romantic. Still, I expected more from Rick. I mean, he loves her, right? So drop the case obsession and focus on the relationship. Please!

Ryan, ever the detective, finally learns the truth about Kate and Rick while interrogating a guy the two of them had already talked to in the Hamptons. To his credit, however, he hides the truth from Esposito. Nice. So now three people know about them: Alexis, Martha, and Ryan. I believe that Lanie might know, too, but she’s not talking. Esposito remains in the dark.

The next show, in two weeks, looks as if it might strain the Caskett relationship. Rick is arrested for murder, and in the promo Kate is crying. Yikes! Marlowe has said he won’t break them up, though, so I have a feeling all will work out during the show. Might be touch and go for a little while, though. That might be good, if it deepens their relationship. Come on, writers. Give us more romance!

I totally agree with Melanie. I’ve already grown weary of the “hide the relationship” storyline. I hope the writers don’t plan to drill that into our skulls for a couple of seasons like they did with the “junior-high-styled longing from afar thing Castle and Becket did for four years. If so, I don’t think I can take it. And why, please tell me why, Ryan, Espo, and Lanie have had such a difficult time figuring this out. After all, Lanie has a crystal ball, right? Wouldn’t some sort of hazy, smoky image of Caskett pop up from time to time?

Was it just me, or did anyone else feel that Beckett was way out of character in this episode? She was timid, almost mousey. Not the usual take charge, strong female detective we’ve seen for so long. A good example was during the meal with the mobster. Castle did all the talking while Beckett sat there, looking down or away most of the time. Just an observation.

Anyway, on to the cop stuff. 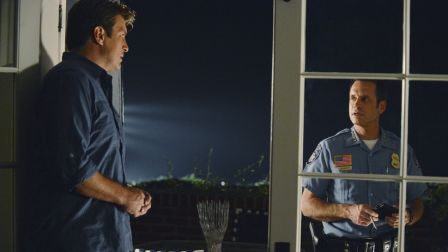 How did Castle immediately know the responding officer was the local police chief? Easy answer. 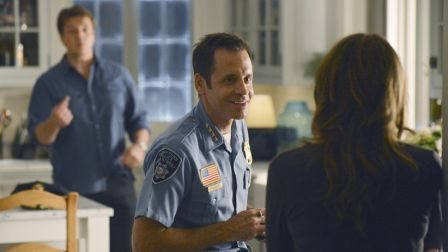 – The police chief was firmly convinced that the meth user on the beach was the murderer, simply because the victim’s wallet was found in his possession. Therefore, the top cop opted to skip any further investigation, such as checking for bloodstain patterns, etc. Unfortunately, this sort of thing does sometimes occur in really small departments in jurisdictions where murder is a rare occurrence. In those instances, it is slightly possible that not every single case is fully-investigated, which means no fancy CSI gadgets, no DNA testing, and no fingerprinting. However, in most of those areas, the local officers know everyone and the criminal suspects are usually the same handful of people who commit crimes over and over again. Therefore, it’s quite possible to  solve some crimes without collecting a single piece of physical evidence.

– Castle and Beckett were arrested for interfering with the police investigation. Really? For asking a simple question. Would not happen. But, if the arrest did occur, they (male and female) certainly would not be placed in the same holding cell/cage.

– The Hampton’s police officers found the original murder suspect passed out on the beach. A man they claimed was wacked out on meth. Well, I’ve never seen anyone who was still high on meth remotely doing anything that resembled sleeping or taking a nap. Instead, they’re normally extremely hyper, won’t shut up, and haven’t slept for many hours, or even a couple of days.

– We saw an attorney sitting in while his client was being intensely interrogated by Detective Ryan. No way on earth a defense attorney would allow that sort of thing. No way. Normally, they advise their clients to remain silent, to say absolutely nothing. And they certainly wouldn’t sit there like a knot on a log while the detective yelled and screamed and accused their client of of everything imaginable. This scene was totally unrealistic. However, it was funny when Ryan realized the suspect had seen Beckett and Castle together at the Hamptons.

– Did anyone “knot” know that Castle tripping over the pile of rope on the dock would be instrumental in his solving the case? Sure you did, right? After all, there may as well have been a flashing red neon sign floating above the tangle of rope.

Of course, Castle solved the crime and everyone lived happily ever after. And that brings me to one important point to note—this episode was light and funny, and it reminded me of the the earlier episodes when the show was fun to watch. No dark “save the world from destruction” plot. That—the characters doing what they do best, the light, cute, and funny—and the romantic spark, is what keeps viewers on the hook wanting more.

Anyway, overall it was a fun episode. Don’t you agree?

*Remember, we skip a week before the next episode airs. Until then…cheers. 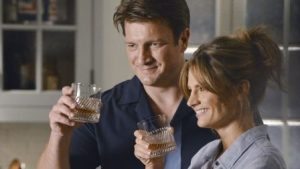 Holly McClure: I Shot A Man One Saturday In September
Scroll to top