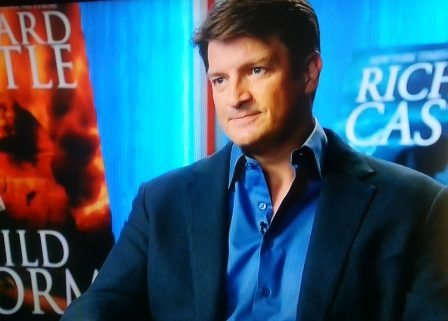 My answer to Castle’s question is…YES! Please go, and please take the writers with you! I’m so frustrated with this show…well, let’s just say I’m not happy with what I’m seeing this season. But, as always, I’ll take one for the team. So here goes. First, though, let’s see what Melanie thought about this episode. Melanie…

This week, I’m back to playing Good Cop… with a major caveat. I liked Montreal much better than Driven, the season premiere, but thought the episode went off the rails for a while before regaining its equilibrium with a satisfying ending. An ending that gave me hope.

The episode opened with Rick being interviewed by a shark wanting answers about his disappearance. The woman first suggests his two month absence was nothing more than a publicity stunt, then asks if he left the day of his wedding to Kate because he got cold feet. Rick is clearly ticked off. He denies both scenarios and retaliates by offering a $250K reward for answers regarding his whereabouts during the time he was missing. I enjoyed this scene and Rick’s discomfiture. Seemed real to me. 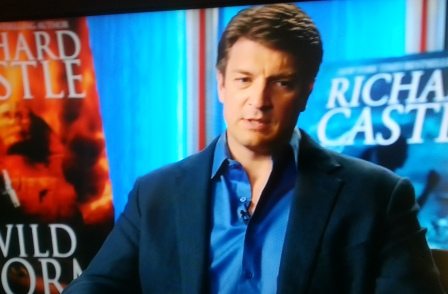 The case Kate catches, the first with Rick back at the precinct, echoes her experience when Rick first disappeared. Rick catches on and seeks to soothe her. Then Captain Gates jumps him for giving the precinct number as the one to call about where he was during his absence, because the phone is ringing off the hook, and in his excitement, he kisses her. Gates. Kate’s boss. What? I first saw this scene in a sneak peek and almost spit coffee all over my laptop. I’m sure my expression mirrored the horrified look on Kate’s face, and I had to ask… why? Yes, the kiss garnered a strong reaction from me, but the craziness of it pulled me out of the story. ‘Nuff said.

Alexis helped Rick weed through the crackpots who called with so-called information, and then Martha announced to Rick that she’d gotten a date from grief counseling and needed him to make himself scarce when the man came to the door. So funny. I’m glad to have Martha back in the thick of things, if only for a couple of scenes. She’s such a fabulous character. We need to see more of her.

The nut who lured Rick to meet him and then claimed they’d been on the same spaceship made me laugh, too. Classic Castle. Even the makeup artist I initially thought was another murder victim brought back the fun of older episodes. I enjoyed watching the case unfold, even if it was odd and the drug dog didn’t act like the ones I’ve seen in demonstrations.

I was totally drawn in and rolling with the show. I bought the idea of the couple who came forward with the picture of Rick, the key sewn into his pants, and the possibility that it might fit a safety deposit box inside the bank in the picture. I even liked that Rick and Alexis traveled to Montreal to find out the truth — and loved the messages contained on the SD cards inside the safety deposit box. Rick’s message to Kate solidified her belief in him.

Rick, of course, had to keep digging. Too many questions remained for him to be satisfied. And that’s when I felt the episode hit a wall. Tory the computer tech, with her magical program that located the obscure buildings in the background of the picture, is partly to blame. Does that technology even exist? I didn’t like Rick going off by himself in search of answers… and when he dismissed the taxi on that dark, lonely street in Montreal, I wanted to throw something at the screen. Of course he ran into one of the men responsible for his disappearance, and of course the man held him at gunpoint. Their cryptic conversation only deepened the mystery, and that disappointed me. I’m tired of big plots hanging over the heads of our dynamic duo.

Will Rick be able to forget his disappearance ever happened? Or will the remaining questions tie him in knots and keep him from moving forward? The last scene gave me hope that he’ll move on, but I know for a fact that the writers will revisit this plot in the future. I only hope it won’t tear Rick and Kate apart. Kate’s show of faith in Rick and her promise to never leave him warmed my heart… as did their plan to wait a month, then make wedding plans. I truly believe we’ll get the wedding we want eventually. Can’t happen soon enough for me!

The preview of next week’s show made me laugh out loud. I hope it’s a classic Castle episode without so much drama and angst. After the past two weeks, I can use a good laugh.

Well, the writers are definitely not allowing any dust to collect on their one copy of the boilerplate script. Not at all. In fact, they pulled it out again this week to fill in the blanks with the latest suspects du jour. Add to the standard formula, another dumb plot point that was best described by the investigative reporter at the beginning of the show when she said to Castle, “Amnesia…really?”

Okay, on with the show…

Lanie. Bless her heart, she tried really hard this week to come across as sounding as if she knew what she was talking about regarding dead bodies and other important medical examiner thingies. She even made a point to let viewers know that bleach could destroy DNA (someone scrubbed the plastic-wrapped victim with bleach). And she’s right, bleach could and does destroy DNA. However, what’s the big rule of thumb when collecting DNA and other wet evidence? That’s correct. Do not place wet evidence inside plastic bags/containers. Why not? Because the plastic can serve as an incubator for bacteria. What could bacteria do? It could degrade or destroy DNA. So, wrapping the victim’s body inside plastic was basically the same as inserting wet evidence inside a giant plastic bag. Just a point for writers to ponder when crafting their dead-body-wrapped-in-plastic scenes.

On the other hand, the scene with Lanie and Beckett “just talking” was pretty good. Great, actually. Not so much for what they said, but that they had the conversation, as friends. Nothing over the top. Just intimate chit-chat.

Lanie also said that she could make a better cause of death determination after she got the victim’s body back to the morgue. Well, she said lab, but I assume she knows where she works. Anyway, that’s much better than doing a total and complete voodooish autopsy at the scene.

– During the search of the toy company we saw Ryan playing on the giant keyboard while Esposito pawed through paperwork and other items. Believe me, this sort of thing happens all the time—officers trying on someone’s funny hat, posing for a selfie with the suspect’s rare 9-legged Martian platypus, etc. Is that wrong? Definitely, but it happens. 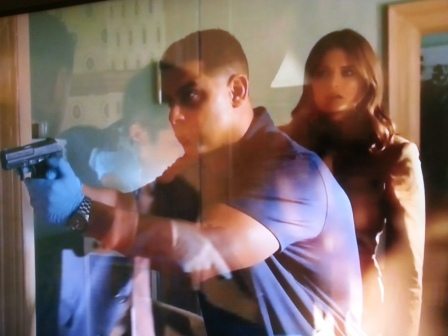 I’m not sure if NYPD officers actually use that term norm or not. I’ve not heard it used anywhere else, though. Not as a part of regular dialog. It’s use is absolutely correct, but it seems a little odd to hear it among working street cops. Typically, it’s, “Hey, you. Hit the streets to see what you can find out.” Or, “Hey, you. Start there and knock on doors until you find someone who heard something.” Again, this one isn’t a big deal at all. Just thought I’d mention it in case someone was planning to work something like this into a fictional conversation.

– The drug dog. FYI – Narcotics canines do NOT suddenly leap up and run several yards to inspect someone’s pockets for drugs. Instead, they search where their handlers tell them to search. Sure, if a person passed directly by the dog, and if that person had a stash of heroin in his pocket, the canine might raise it’s head and ears, look at the suspect and then back toward the officer (an alert). But it would not get up and run 30 yards through offices and hallways, straight to a specific person. For starters, the scent of the drug does not work like a flashing red arrow that points at the suspect. The dog would need to work it’s way to the source of the scent. Very unrealistic.

– The goofy, stupid, magic computer. Dumb. I really hate that they’ve added this “device” that allows the writers to skip over/avoid the hard spots. It’s cheating, and it’s insulting to viewers.

Finally, the killer was, as expected, the toy company employee who had that quick, trademark/boilerplate script on-camera time.

Oh, one more month until the wedding? No surprise there. This show is the world’s worst for over-milking every single storyline.

So, what are your thoughts about the show? Better than last week? The same? Did you love it, or are you already hoping for something better to come along?

Pay It Forward
Scroll to top