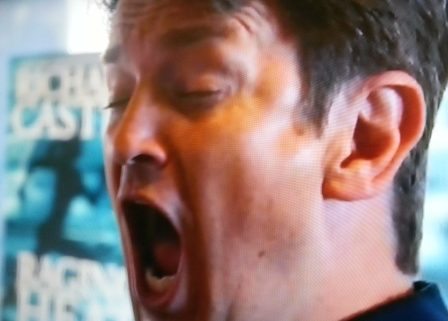 Human sausages in November…I’m not getting anywhere. ~ Richard Castle.

This week’s case-focused episode of Castle surprised me. It wasn’t a total yawner, and I actually cared about what happened to the two kidnapped techno-millionaires at the end. Well, not so much about what happened to them, but more about whether or not Kate, Rick, and crew would get to them in time to save their lives. Which, of course, they did.

The first scene in the bookstore between Martha and Rick was a total gem. I love Martha, and glimpsing her in her realm as an acting coach, even for a few short moments, made me smile. So funny, and so Martha. The last ninety minutes with Kate, Martha, Alexis, and Rick gawking at Rick’s completely cringe-worthy web-mercial was even better. Holy cow. I laughed out loud so many times! 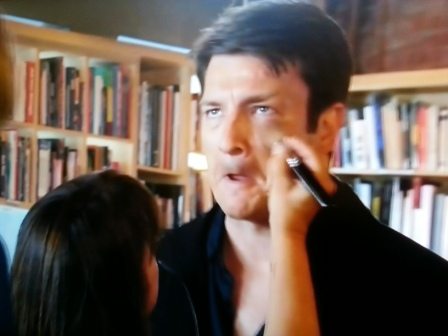 Kate and Rick worked as a team on the case, of course, with Rick putting the clues together as they went along. Ryan and Esposito added plenty of flare. I was also pleasantly surprised by Lanie’s assessment of the body at the beginning at the show. No wild imaginative leaps, no crazy suppositions before doing the autopsy, except knowing which arteries had been severed without even taking off the victim’s clothing. Seemed like logical guesses to me for someone with a good knowledge of anatomy.

Tory the tech got on my nerves, as she usually does, and some of the things she did seemed a bit far-fetched, but not so much that I couldn’t suspend my disbelief.

What the show didn’t give us was any real intimate interaction between Kate and Rick. Too bad. I did love, however, that when Gates sent Kate home for the night mid-show, she and Rick went to the loft. A usual occurrence these days and totally understandable, since they’re about to tie the knot, but I do love that his home is hers now, too.

Can’t wait for the next episode in two weeks. The wedding episode I’ve been dying for after years of waiting. Yay! Then the honeymoon episode after that. Never expected them to go to a dude ranch, or wherever they are out west, but I can live with it. They’re finally getting married!

I’m taking a different approach to my portion of this review, and it’s because I’ve grown extremely weary of Lanie-bashing. So I won’t mention how really cool it must be to possess the ability to see inside a human body, without the benefit of autopsy or x-ray equipment. You know, like seeing punctures to major blood vessels and being able to definitively state those were the cause(s) of death, and all while still at the crime scene with a fully-clothed victim. From the look on the actor’s face at the time she delivered those lines, well, I don’t think even she believed what she was telling us. Here, see for yourself. I managed to catch her saying this off-camera. 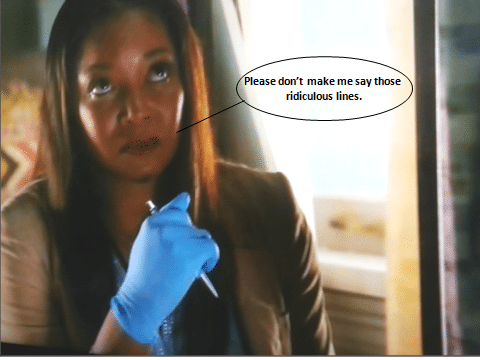 Overall, though, the investigation was fairly good. Beckett and crew systematically tackled the steps needed to bring the case to a successful conclusion. Sure, a few things were over the top, but it’s a fictional television show and that sort of thing is needed to keep our eyes and brains glued to the screen (gee, brains and eyeballs glued to a TV screen sounds a bit Halloweenish, huh?).

Of course, the guys were on the money with their photo geo-tagging information. Please take a moment to click over and read what nationally renowned cyber-crimes expert Josh Moulin has to say about the topic .

Josh Moulin: What Information Is In Your Digital Images? 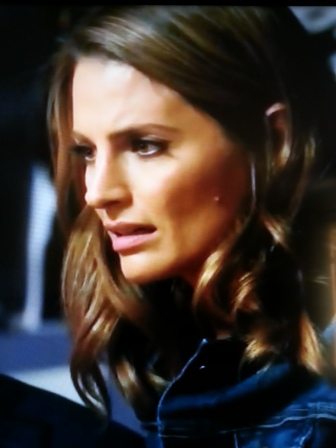 Beckett’s interview with the killer was a condensed version of what you might hear in a real police interview. She said exactly what she needed to say to get the cyber-crook to confess.

After all, there were lives on the line and time was short. A good detective absolutely must be able to adapt to whatever and whomever is before her. If the suspect is a huge fan of earthworm racing, well, a savvy investigator will suddenly become the next big fan of red wigglers.

Fact of the day – Did you know the Asian jumping earthworm (Amynthas spp.) is an invasive species that, when exposed to light contracts into a tight “S” shape, and can and often leaps several inches into the air?

Finally, I want to mention the ex-detective, Bill Garrett, who helped Beckett solve the case. He’d retired after a bitter end to a long career as a police officer. Many civilians don’t understand exactly how working as a police officer can encompass your entire life. Officers are never really off-duty. They’re always on alert for whatever could and does happen. The job is almost always on their minds. It’s a job that cannot be left at the office.

Unsolved and particularly troublesome cases weigh heavy on an officer’s emotions. It’s a tough and dangerous job, and it takes a special person to succeed at it.

And, when it’s all over and retirement rolls around…well, it’s tough to let it go. In fact, part of the job is always there, lingering. Former cops are still on high alert and many of them miss the job each and every single day. Therefore, to have the opportunity to participate in anything related to police work is indeed a wonderful feeling. For example…

Earlier this year we were passing through a shopping center when I saw two officers in the process of attempting to arrest two extremely combative and violent suspects. The crooks took the officers to the ground and were really giving them a good going-over. The bad guys were definitely winning the battle while a crowd of spectators stood by watching, with many cheering for the thugs.

Denene was driving and I asked her to stop so I could help out. She reluctantly pulled over to let me out. I approached and announced to the struggling officers that I’m a former police detective and I was there to assist, if they so desired. However, the situation was extremely dire so I didn’t wait for a response and went right to work.

Sure, I’m older and slower than I used to be, but after many years of teaching defensive tactics and officer survival, practicing what I’d preached for so long came back naturally.

Thankfully, I was able to initiate a bit of “pain compliance,” grab a pair of cuffs from the case attached to the rear of an officer’s duty belt (he was not in a position to reach it), and then terminate the suspect’s aggressive actions. Fortunately, backup had arrived and had taken control of the second suspect.

When all was said and done and the bad guys were secure I walked back to our car and we drove away. It was all over in a couple of minutes, but the excitement of it all stayed with me for hours. Helping the officers stirred up a lifetime of emotions and memories.

The same is true about the Writers’ Police Academy. It’s my link to a world I once thought was lost and gone forever. Fortunately, after I left the job I was able to immerse myself into writing and to make a zillion friends who are also writers, readers, etc. Many other officers, though, don’t have those opportunities, which often leaves them feeling alone, useless, and depressed.

Anyway, yes, the scenario with the retired investigator helping solve the case was a really nice touch. And what made this small portion of the show so wonderful was the actor. He was truly believable.

At the end, his expression told a story very similar to my own. Police work was his life and it felt great to once again do what he loves. This was a great aside to the main story, so kudos to the writers and to the actor. 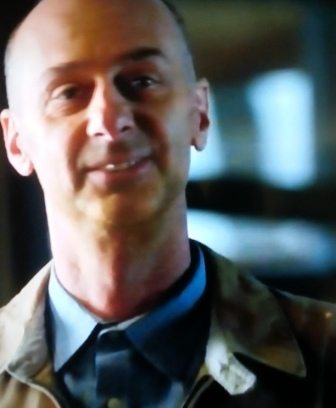 Okay, I guess I didn’t stray from my normal review format after all.

It was Lanie. She made me do it…

What Bounty Hunters Look Like Today
Scroll to top