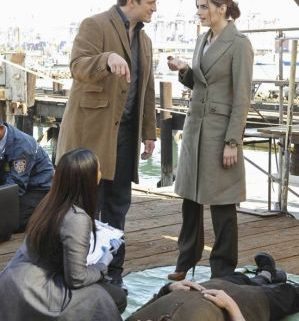 Scott Williams is the writer who set this episode of Castle in motion. Williams, who has also written for Bones (see comment at the end of this post), Miami Medical, and Without A Trace, brought a new voice to the show, one that was obviously different than the others. However, a new voice didn’t stop us from hearing Lanie’s dribble.

The murder victim of the week (nicely posed in image above with hands placed on his lower chest) was snagged by a fisherman who bravely won the battle over a dead body that fought like a LIVE great white shark. Seriously, the guy was fishing with a bobber attached to his line, a line that suddenly began to peel off the reel so hard it caused the drag to squeal as if he’d hooked a monster catfish. Dead weight on a fishing line is exactly that…dead weight. Snagging a dead body is more like hooking an old tire, or tree limb.

So, with the body on deck, Lanie (again with the lividity – “Based on lividity and water temp the TOD was between 4 and 6 hours ago.”) at first says the time of death was 12 hours at most. She later changed it to the 4-6 hour time frame listed above.

Well, we all know that lividity is caused by gravity. When the heart stops pumping, blood begins to settle in the lowest areas of the body. Sort of like when it rains and you see water collecting in small ponds in the lowest areas of your yard. Anyway, the blood collects in those low areas and continues to do so, staining the tissue a deep purplish color, for approximately 6-8 hours. During that time blood remains in a liquid to semi-liquid state, becoming less fluid as time passes. At the end of the process (6-8 hours) lividity becomes fixed, which could only tell Ms. Parish that the stiff had been that way (dead) for at least 6-8 hours. HOWEVER…when a body is in water the rules change. In fact, lividity could be absent in a floater because of the water’s buoyancy. If lividity is indeed present in a body found in the water, then chances are he was killed elsewhere and later dumped in the river, lake, etc. On the other hand, lividity can be manufactured by fast moving currents. Picture the body lying on the bottom of river with rushing waters tugging at the victim’s limbs. That fast moving water can cause blood to be pulled to the downstream portions of the body, creating the purplish discoloration in those areas. But a good investigator/M.E. will know those details. Lanie does not.

Lanie – “The victim has a nasty crush injury along the temporal line.” The injury she was describing certainly didn’t match the huge laceration on the guy’s scalp. And a body in super cold water as long as this one would not show all the bright red blood around the wound. Blue, blue, blue!

Lanie Parish, V.D. (Voodoo Doctor) says something like, “Classic indicators indicate the injury was caused by blunt force.” What classic indicators? I guess the Voodoo Guide For Television M.E.’s spells those out in details we’re not privy to.

Lanie – “I’m going to zip his prints over to the precinct for an ID.” This was a good line for Lanie, much better than what she normally does—run the prints herself.

Lanie was able to look at a lead pellet and automatically determine it was a double-aught (00) pellet from a shotgun shell. That’s pretty good guessing. Actually, someone in firearms would need to make that determination. Must’ve been in her book. So was the information she used to know the pellet had been in the guy’s arm for 2 to 3 weeks.

Okay, enough about Lanie. No, wait. One more thing. She does seem to be delivering her lines in a more realistic manner—more M.E.-like. Not so cutesy. I like that. She’s at least delivering those dumb lines in a professional manner. I know, the writing is not her fault, so at least she’s attempting to make up for it by acting like a real M.E. So good for her! 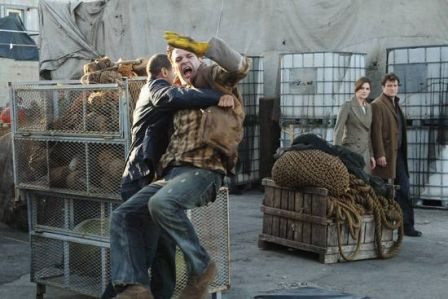 Esposito is definitely emerging as a the tough guy, and I loved the takedown/clotheslining of the fleeing dockworker. And his line, “Man said don’t move,” was classic.

– Beckett undoing a button on her blouse at Castle’s request was humorous. Castle’s expression afterward was hilarious.

– Castle confronts the bartender about “skimming” money from the cash register. He knew the bartender was doing it because he was placing cherries and limes in a container as markers—cherries represented five dollars and limes ten. Crooked convenience store clerks have been known to do the same. However, instead of using fruit as markers they use coins—pennies for dollars, nickles for five dollars, etc. Each marker represents the amount of money they can safely remove from the cash register at the end of the shift without being caught (they’ve faked receipts throughout the course of the day and the extra is what they take). Anyway, good information from Castle.

And this brings up a good point. Who’s the cop here, anyway. It’s getting a little old seeing Castle know EVERYTHING while Beckett and crew slowly become keystone cops. 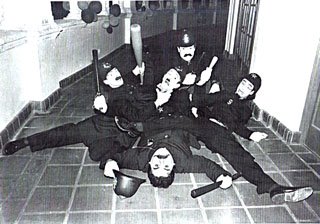 – Beckett and Castle head down into the basement. The suspect brings up the rear. No way this would happen in real life. Cops never allow a suspect, or anyone else for that matter, to follow behind, especially into a situation like this one. Police Safety 101.

– Beckett examines a tiny hole chipped into a concrete wall and declares, “These are buckshot holes.” WHAT????? How in the world would anyone know this merely by looking at a hole. Could’ve been caused by someone trying to drive a nail in to hang a picture…anything. Ridiculous comment. Not believable at all. Besides, the soft lead pellets she found on the floor were still intact…perfectly round and not flattened at all after striking the very hard concrete wall.

– Again, Beckett and crew enter a public gathering and hold up their badges to get the attention of the speaker so they can place him under arrest. And again, this is not a safe way to arrest someone. The crowd could turn on the officers; the suspect has any number of hostages to grab, etc. Police Safety 101, page 2.

Is it just me, or is every episode becoming more and more predictable? I pegged the killer the second he appeared on screen. And the obvious clues throughout this episode were, well, obvious. And they were poorly planted. And Beckett explaining them info-dump style was sort of annoying.

The final scene where the team fades out while singing Piano Man was a nice touch.

By the way, here’s what TV Guide had to say about this season:

“Castle”: “The first season was really fun. The second was fun, but some of the writing started to lag. This season seems to be very formulaic. It’s like you can tell who the murderer is within the first 10 minutes. It’s also starting to pull a Bones, with giving the main characters other main squeezes while the fans scream at the TV set wanting Kate and Rick to get together.” — qweely Source: TV GuideABC/Karen Neal – Tuesday, November, 30, 2010, 7:30 PM