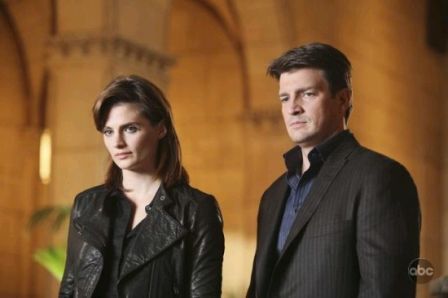 Kill The Messenger, this week’s episode, was written by Terence Paul Winter. I have to admit that I was intrigued when I read that Mr. Winter wrote this episode. I knew that he’d once played the part of Lee, one of Al Bundy’s football buddies on the hit comedy, Married With Children. Winter has also appeared in, and written for The Sopranos, another of my favorite shows. Well, needless to say, I could hardly wait to see what this very talented guy had in store for Castle and company. Besides, Winter had played the part of a character named Lee, so he has to be one of the good guys, right? Let’s see how he did…

The first thing I want to point out would have been a very important clue had this been a real murder investigation. In this case, it’s an accident that I don’t think we were supposed to notice. If you have the show recorded you’ll want to go back to the beginning  to see this for yourself.

The opening scene shows a bike messenger peddling his way through city streets when he’s intentionally struck by a car. He lands on the pavement, dead, and his bike is clearly lying in front of the suspect’s car, sort of under the front end, near the driver’s side tire.

The driver/killer gets out of his car and rushes over to the dead messenger. He grabs the dead guy’s backpack, then hurries back to his car and speeds away. Well, when the killer got back in his car the bike was no longer in front of the vehicle. Instead, it was lying off to the left-hand side of the bad guy’s car, well out of the way, which allowed the driver to make a really cool getaway. Obviously, a crew member had moved the bike to allow the action-packed escape, but in real life it looked like the video had been altered. That’s the stuff detectives watch for.

– Becket once again told someone to issue an APB (All Points Bulletin). Those alerts are now called BOLO’s (Be On The Lookout).

– Beckett’s boss, Captain Montgomery, made a comment about budget cuts affecting the case clearance rate in his division. He also stated that his superiors would still expect cases to be solved even with less funding and less manpower. This is a very real occurrence. I know that mayors and city council members all across the country take a good look at stats at the end of each month. Anyone who’s not pulling their weight could soon find themselves back in uniform, walking a beat.

– When a suspect’s name popped up on a terrorist watch list, Beckett and crew immediately suited up in full SWAT gear and then kicked in the door to what they thought belonged to the terrorist guy. Well, they were wrong. Instead, the apartment belonged to a sick, elderly woman. Hold on…Wait a minute! Whoa, Nellie…Do me a favor, guys. Close your eyes for a moment and let this scene really sink in. Get a good mental image of it in your mind. Got it? Okay, those of you who have my book on police procedure, please turn to page 229 and read the short anecdotal section there. Tell me what you think. Coincidence?

Oh, and what about a search warrant? Not to mention that little thing called probable cause. They had neither.

– I loved the scene where Castle and Beckett’s two sidekicks were sitting on the couch during the search, drinking coffee while cats climbed all over them. Hilarious, yes, but could that really happen? Sure, and someday I’ll have to tell you about the time my entry team and I searched the residence of a very well-known show business person. The elderly grandmother there (she was not the target of the investigation) insisted that we take a break during the search to partake in an elaborate buffet, including wine and champagne, that she’d ordered her staff to prepare for us. I couldn’t seem to make her understand the seriousness of the situation. Of course, we didn’t allow the staff to begin slicing, dicing, chopping, and cooking, and we couldn’t accept her offer, but that didn’t stop the little lady from trying to extend her hospitality.

– Captain Montgomery delivered the news that a suspect had been “shanked” at the prison. Good terminology. Shank is slang for a homemade weapon that’s capable of cutting or stabbing. He later referred to a similar weapon as a “shiv.” Same thing, different name.

– Beckett and company obtained a copy of phone call recordings from the prison. Not all prisons operate exactly the same. Many prisons do not record all inmate phone calls, nor do they listen in on all conversations. Normally, calls are monitored randomly, unless illegal activity is suspected. Then officials may listen in and/or record all calls made by the suspect.

If you managed to hear the beginning of the taped conversation made by the prisoner you heard a female accept a collect call. FYI – Not all inmate phone calls are collect calls. Most institutions have an inmate account system in place where the prisoners are allowed to purchase items in the prison store. They also use that same account to pay for phone calls.

Calls made using the account are billed at a normal rate, similar to what we pay for our home telephone calls. Collect calls, however, are billed at a tremendously high rate, possibly as high as four or five dollars per minute, maybe more. Fees collected from these calls are split between the prison and the company providing the service. It’s very profitable for both organizations. However, it’s a huge financial burden for family members who try to remain in contact with with the inmate.

– Inmates are normally very careful about what they say while using prison telephones. They know that phone calls may be monitored.

– The prisoner who was killed had been incarcerated for ten years and was still married. His wife was patiently waiting for him.  Normally (not always), relationships end after a few years once a spouse has been locked up. Relationships in these situations rarely make it to the decade mark.

– Beckett told one of her crew members to check the prisoner’s email records. Inmates do not have access to the internet. In fact, all inmate computer activity is closely supervised and is normally allowed only in a classroom setting. They’re not permitted to possess discs, thumbdrives, etc.

– Do you agree with Castle’s statement, “If a writer nails the beginning of a story then the rest simply falls in place.”

– M.E. Perlmutter is shown eating a meal in the morgue. Sure, I’ve seen coroners and M.E.’s having a bite to eat in the morgue. This guy plays a pretty good part. I wonder why his lines are better than those of the screwy female M.E.?

– Okay, Perlmutter did make a questionable statement. He said that injuries on a dead body (skull) weren’t consistent with the former M.E.’s report stating the death was caused by a blow to the head with a baseball bat. Then he said the previous M.E. probably didn’t conduct a thorough autopsy since the suspect confessed to the murder (using the bat). No way a pathologist would stop in mid-autopsy just because someone confessed to the crime. That’s not proof of anything. Too many people confess to crimes they didn’t commit.

– One of the detectives said that the prison warden refused to release a roster containing names of prison guards who may have participated in the murder of the prisoner. He also said the warden was going to keep the murder investigation in-house.  If this is a state facility the state police would probably investigate the murder. If it was a federal prison then the U.S. Marshals or the FBI would take the case. Of course, each prison has their own investigators who would assist in the investigation.

– Some of the interview scenes in this show were pretty good, with the exception of the one where two brothers/murder suspects were interviewed together, in the same room. Always separate witnesses and suspects.

-Beckett’s death notice delivery was decent. That’s a part of the job we all hate. And, it takes a special cop to do it properly. I’ve known cops who’ve called someone on the phone to tell them their spouse has just been killed. That’s horrible. I always delivered the news in person. It’s an unpleasant part of the job, but family deserves that final bit of dignity and compassion.

– M.E. Perlmutter tells Beckett and Castle to stand back prior to opening a casket that had been recently exhumed. He told them to be prepared for the worst decomposition and stench that one could ever imagine. The body had been dead and buried for ten years. Decomposition would have been completed long ago and there wouldn’t have been anything left that could possibly cause an odor. Well, with the exception of some of the forensic material in this show. That certainly stinks.

Oh, the M.E. is shown dusting items for prints. That’s a job for CSI or police officers. M.E.’s don’t dust for latent prints, and cops don’t perform autopsies. That’s kind of the rule of thumb.

There has been a slight delay in getting the Writers’ Police Academy registration online. We want to make sure everything is perfect before we do open registration. Hopefully , we’ll see it in a day or two. Thanks for your patience.

There is a test page up at www.writerspoliceacademy.com so you can get an idea of what the site looks like.  Keep in mind that this is just a test page. There are still a few errors, missing information, and incomplete text.

Remember, the hotel has limited space due to other large events in the area. Please register early! In fact, some people have already begun securing their rooms. If you plan to attend the academy I strongly urge you to do the same.

Followon TwitterSubscribeto RSS Feed
Female Police Officers: Are They Really Wimpy, Or Do You Just Write Them That...The D.C. Sniper, Death Row, and Writing Setting As A Character
Scroll to top