I enjoyed this week’s show. I wasn’t sure I would in the beginning, when it started off with Kate’s surprise and frustration over one of her police academy buddies having been promoted to captain at the 92nd precinct. At first I thought she was jealous, but finally I came to understand that she’s merely at loose ends and is ready to dive into the next chapter of her life. IMHO, that chapter started with her marriage to Rick, but apparently she also craves a change professionally as well. Or does she want a baby… or both? Who knows? 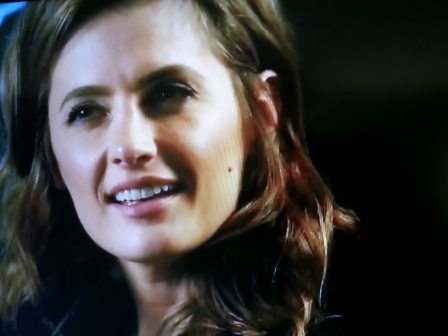 Rick believes Kate has “Patterson Syndrome”, or in other words, that by comparing herself to her peer who got the promotion, she’s comparing apples to oranges and isn’t being fair to herself. She makes the comment that maybe she shouldn’t have left the job in D.C. Except… the DOJ fired her, so she didn’t really have a choice in the matter. I had to roll my eyes at that one. Kate also says she thought she’d be in a leadership position by now. Only, she hasn’t pursued that avenue that I know of. She’s been happy being a detective who brings closure to grieving families. Excuse me. Did the writers already forget all of this? How about a little continuity, huh? This made me want to bang my head on the wall.

Well, enough about my frustration and on to this week’s case, involving a “superwoman” cop from Hong Kong named Zhang, who came to NYC to help a friend in need… and the friend turns up dead in a park. To make matters worse, a jogger identifies Zhang as the person rifling through the victim’s pockets right after the man was murdered. Ryan and Esposito find Zhang in the victim’s apartment. Instead of bringing her in without incident, however, she gets the drop on both of them. I imagined Lee rolling his eyes at that one, since they both lost their guns.

Turns out that Zhang not only heads up a major U.S.-Chinese task force, but also works with the international war crimes tribunal in The Hague. In addition, she’s the wife of a handsome Hong Kong TV star, has two perfect kids, and is a martial arts whiz who can apparently take on ten foes at once and lay them all out on the floor without breaking a sweat. In other words, she’s everything Kate wants to be. At this point, I became much more interested in Kate’s restlessness than I was in the case, so I’ll leave that discussion to Lee and keep my focus on Kate.

She and Rick work with Zhang to find out who killed her friend, and Kate asks Zhang how she manages to be all things to all people. Zhang proclaims that the key to success is finding balance in one’s life. Sounds simple enough, but Kate seems to believe she’ll never find that balance.

Later, however, as they dig into the case, Kate learns that Zhang isn’t quite as perfect as she seems. She’s separated from her husband and hardly ever sees her kids. Is that the life Kate wants? Heck, no. Kate wants professional satisfaction, but without jeopardizing what’s most important in her life: her family.

I believe Kate’s reassessment of her priorities is leading up to yet another conversation with Rick about the possibility of them having a baby. This, in turn, may` signal that the series is winding down to its natural conclusion, because Nathan and Stana’s contracts are up and they have yet to sign on for season eight. ABC wants to renew the show for at least one more abbreviated season, but only time will tell if that will happen. Meanwhile, we still have six episodes to go in season seven. I adore the show and don’t want it to end. Yet when it does, I hope they’ll at least give us a satisfying conclusion.

Next week’s episode features Ryan (Seamus Deaver), who gets in a pickle while moonlighting off the job. Can’t wait to see how that turns out.

Well, my job was easy this week because there was so little police work to pick apart. Well, other than the personal side of the job, that is.

Beckett felt inadequate due to the career advancements made by her peers while she continues on as a detective. This sort of feeling among cops is/can be very real. However, some officers prefer to remain in their positions/assignments, bypassing promotions, etc., and their reasons are simple—they love what they do—patrol, traffic, homicide investigations, etc. Moving into a leadership role is not for everyone.

I did question how Ryan knew the killer took the victim’s keys and cell phone. I mean, how could he possibly have known the dead guy had those items prior to being killed? Was there a note/inventory list in the corpse’s pocket that read, “If I’m dead when you find me please know that I had these items in my pocket at the time I was murdered—key ring, cell phone, three Fig Newtons, and an antique shoe horn.”

As far as the rest of the show went…same old, same old. The killer was predictable. Someone lost their gun (actually, Ryan and Esposito lost theirs at the same time). 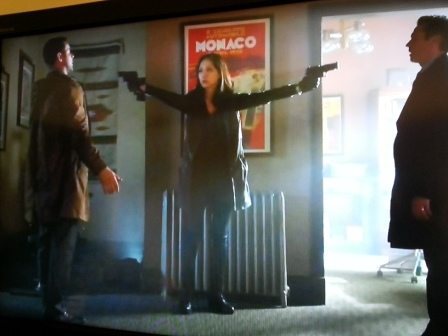 Then, as always, someone was kidnapped. Of course, we saw the same tired parade of red herrings have their turn in the hot seat. And, well, blah, blah, blah…