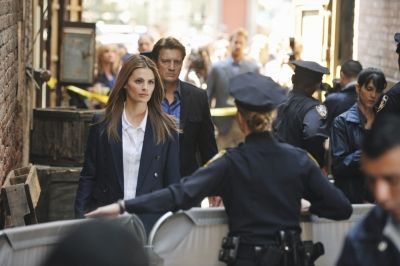 Heroes and Villains is the title of this week’s episode. I think, however, that someone must have grabbed the wrong reel from the film archives. I say this because I’m almost certain that what we witnessed last night was not an episode of Castle. Please, somebody tell me I’m right because I’m pretty sure what I saw was a repeat of Dumb And Dumber. Anyway, I’ll hold my tongue while Melanie discusses the mushy stuff.

Melanie, are you out there? Or, are you still exhausted from attending last weekend’s Writers’ Police Academy?

This episode was much lighter than last week’s tense season premier. Much lighter, and kind of weird. I caught several procedural uh-ohs I expect Lee to jump on, so I won’t mention them here. And yes, the case was kind of convoluted — but the episode as a whole was rich with relationship subtext even if the plot was thin.

Huh? I can just hear Lee now. Rick was all broken up about Alexis’ plans to graduate high school early and join Ashley (her boyfriend) at Stanford in California in January, and he talks to Kate about it. Her words to him mirror their relationship — or at least what it’s been in the past: “You two are not on the same page” and “If you hold her too tight, you’ll drive her away.”

Then, as they pursue the masked crusader suspected of cutting a man in half in that alley (is that even possible?), Kate mentions that she likes Electra… and Rick picks up on the fact that the character is a woman who buries her emotions — just like Kate. And later, he mentions that their suspect and the comic book character share a symbiotic relationship. Yin and yang… one can’t live without the other. More relationship symbolism, anyone?

Suspects fall like flies, one after the other, until they zero in on Officer Hastings, a uniformed cop who was at the crime scene. Her situation mirrors Kate’s — she’d lost her father to murder — and she craves vengeance. Her words to Kate, “Nothing I do will ever be enough”, seemed to strike her, too. Did she see herself in the other woman?

I hope so… and I pray she takes to heart her words to Hastings after the real killer was finally caught and the officer is released from custody. Hastings looks at her boyfriend, and Kate says, “You’re a good cop. You’ve got somebody who cares for you. Don’t be so driven by the past that you throw away your future.”

Rick gets it. He looks at Kate as they prepare to leave and says, “A writer and his muse. Just like us.” Uh huh. Then they witness a kiss between the comic book writer and his muse as the elevator doors close, and I know Caskett fans everywhere were hoping for a kiss. I was, too, but didn’t figure we’d get it this early in the season. And I was right. Marlowe was just taunting us, making us want more.

I didn’t care too much for this episode, except for the conflict between Rick and Alexis and the tiny Rick-Kate moment at the very end. Too much silly case and not enough give and take between our two leads. A filler episode, if you will. I’ve come to love the drama… and the whacky episodes that work. To me, this one did not. Hope next week will be much better.

Okay, my turn… Better, Melanie? Really? The next episode HAS to be better because down isn’t an option when you’re sitting at the bottom of the septic tank. And that’s exactly where this WTF episode belongs. Where do I start? Let’s see.. How about cutting a man in half with a freakin’ sword… 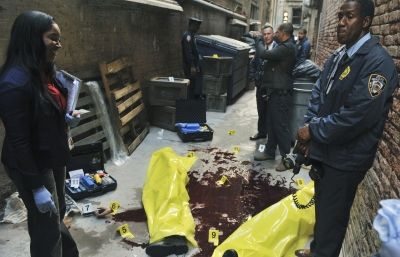 Even The Three Stooges wouldn’t insult their audiences with this garbage. Sure, I think the writers were going for a bit of humor, something they manage to pull off once in a while, but it definitely fell flat this time around. It would take someone with superhuman strength to pull off something like cutting a man in half with a single blow from a sword. The problem with this scenario is that the bad guy of the week was a weasel, not someone with comic book strength. Not even close.

Lanie’s blood spatter (bloodstain pattern, by the way) comment could be right. If the guy had been hacked in two, first, then the wrist and hand would not exhibit any spray from the arteries. Cast off, probably. So not too bad. Not so sure about the sword tip in the body, though. 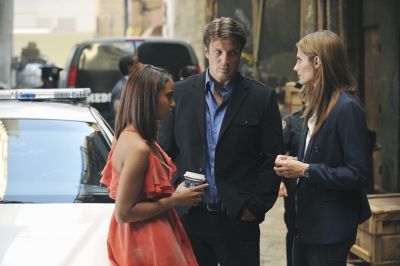 How about the “ice-princess-assault-victim? I mean, just how cool is she, to be able to stand there and calmly drink a cup of morning Joe while discussing her near rape/death experience while watching some guy in tights hack up her attacker like he’s slicing a pork chop off the hog? And why did they make her stay there for hours with the victim’s blood all over her? And, by the way, what’s wrong with Beckett? 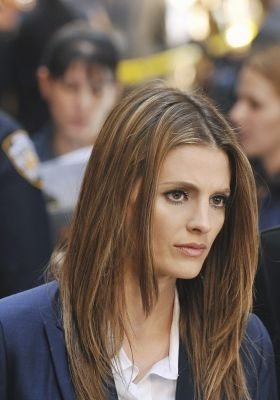 Someone needs to feed that poor child. She’s practically skin and bones this season. My guess is that she was allowed to see all the scripts for the upcoming episodes and now she’s so worried about the show getting cancelled that she can’t eat. Somebody please toss the lady a doughnut.

I absolutely can’t stand the new captain and the way Beckett is so passive around her. That’s not the Beckett of the first few seasons. And that’s the Beckett the audience likes.

Beckett was sporting some pretty tall heels last night, so I’d like to ask all the women who attended last weekend’s Writers’ Police Academy…what did the female detectives say about wearing heels while at work? All together now…”NO!”

Beckett tells one of this week’s suspects, “I will keep you safe and get you placed in segregated housing.” Just an FYI, folks. Cops have no say over where an inmate is housed once they’re assigned to a prison. Even judges don’t have that authority. It’s strictly up to the prison officials as to where they place their inmates.

Capt. Iron Pants asked Beckett, “Any reason you’re not pressing any charges?” A cop would probably use the terminology “issuing warrants,” not pressing charges.

Okay, I’m tired of being negative. Unfortunately, that’s how I feel about this episode. In my book, it was horrible. And, I think I see something coming toward us from the horizon… Yes… It’s getting closer… It’s… 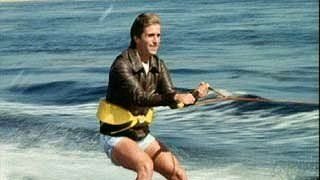 2011 Golden Donut Winner And Runners Up
Scroll to top