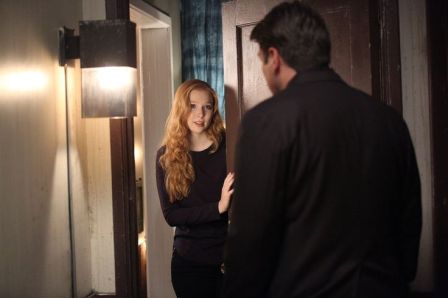 Before we start this review, I have one tiny thing I’d like to get off my chest, and here it is. I. CAN’T. STAND. PI.

Okay, now that that’s out of the way let’s knock on Melanie’s door and see what she thought about this week’s episode. Melanie…

This week’s episode of Castle had a definite Da Vinci Code vibe. Mysteries, intriguing history, and a puzzling murder… all are right up Rick Castle’s alley, and this case fit right in. I enjoyed it, but was much more interested in the drama playing out between Rick and Alexis.

The show began with Martha and Rick visiting Alexis in her new digs with Pi, the fruitarian hippie, for dinner. The night is a disaster thanks to Rick’s blatant disapproval of his daughter’s new living situation, and I can’t say I blame him. I don’t like Pi, either. The fruit loop needs to go, and soon. I don’t know how long they plan to keep him around on the show, but I’ll definitely cheer when he’s gone. I am enjoying the conflict between Alexis and her father, however, and maybe that sounds hypocritical. She’s always been the perfect, precocious child, and now to Rick she’s a stranger. A headstrong young woman sowing her oats and demanding to go her own way.

Rick vents to Kate about the situation and she tries to help, but the case gets in the way. I wanted more interaction between them… heck, just more Rick-Kate time in general. A few hugs and kisses and a little more reassurance, not just a promise from Kate to Rick to “come by later and try to cheer you up.” Come on, folks! Case heavy episodes just aren’t as much fun to us shippers.

Still, I appreciated the banter and the way the case played out with Rick and Kate working together, even though I pegged the murderer fairly early in the show. The episode contained lots of great lines and funny moments. Classic Castle, without the lovey-dovey moments I crave.

The last heartfelt scene between Alexis and Rick got right to the meat of their conflict: her disappointment in his not telling her he planned to ask Kate to marry him before the fact. She found out over the phone while she was in Costa Rica, and that upset her. Of course, Rick and Kate’s engagement did happen pretty fast, as Rick pointed out, and Alexis was already out of the country by then. IMHO, she needs to get over it — she is nineteen and in college, after all — even though she does have a point about acceptance. She has accepted Rick and Kate’s engagement, and she simply wants the same acceptance from her father about her own relationship with Pi. Fine, but she still comes off as an angry young woman using Pi to get back at her dad. Maybe Alexis isn’t so grown up after all.

Next week’s episode again focuses on Rick and Alexis as they work to prove a man on death row is innocent, and I’m wondering if it will bring them back together or push them further apart. Is Pi involved? Is Kate? What do you think?

Bring it on, and we’ll all find out together.

Let’s see a show of hands. How many of you knew the identity of the killer long before Beckett and crew figured it out? Easy to spot, huh? Yes, the boilerplate script was pulled from the shelf and dusted off for this episode, and the writers sort of missed their mark when filling in the blanks.

The show wasn’t bad, nor was it one of the better efforts, thanks to a disconnect between the case, Castle’s funny and boyish enthusiasm, and Beckett and crew. It almost seemed as if the show was filmed in three separate segments and then pieced together at the end of the week.

Actually, there was a fourth segment—Lanie.

Bless her little heart. I often feel sorry for Tamala Jones because of the horrible lines she’s given. I know she has no choice, and for the kind of money she receives to deliver those lines, well, I’d be more than happy to say them too. But it doesn’t have to be this way. It would be just as easy to write believable fiction as it is to write the nonsensical babble we consistently hear from Lanie. They don’t write it for Perlmutter, so why do it for Lanie? Anyway, the writers once again pushed Lanie under the largest bus they could find. And they’d been doing really well…until this week.

So the point about the murder taking place at a different location was a good one. Later, though, she tells Esposito that, “Based on the curvature of the wound and injuries to the neck, I’d say she was stabbed with a sword. And it went in to the hilt because it left a crenulated (an irregularly wavy or serrate outline) bruising pattern, like this…” And she showed Esposito a picture of a sword.

Okay, this one stopped me in my tracks. I rewound and played it again just to be sure I’d heard what I thought I’d heard. I hoped I was wrong, but no, I’d heard correctly. So, my first thought was WTH (what the heck) is she talking about? A sword? Really? A sword? Because the wound was “curved?” Okay, that alone was stupid, but first let’s address the curved blade. Are there other items with non-straight blades? Let’s see… 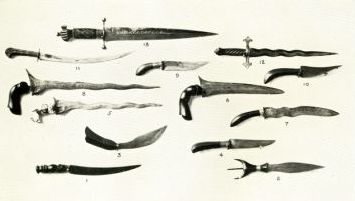 Why not one of these curved-beak guys? Looks like a mad, psychotic killer to me.

Actually, the chances of a suicide-diving ibis flying directly into a victim’s neck with enough force to cause a through-and-through wound are about as good as Lanie looking at the wound in the victim’s neck, determining it was caused by a sword with a curved blade. It is, however, possible for a weapon or other object to leave an identifiable imprint in the skin.

Then there was the “ink on the hand thing” where Lanie detected ink residue in a gaping, palm-covering wound on the victim’s hand. And, presto-magico, and with a poof of pixie and fairy dust, Lanie determined the ink was used to draw a very distinctive pattern on the dead woman’s palm. But there was no pam left! It had been gouged out and away. It was gone. Not there. Nothing. In the past, the writers of this show have pushed the boundaries of realism out to the extreme, but this ink-crap was one of the worst stretches ever. Dumb, dumb, and double dumb.

– Of course, there were the fictional moments where Ryan and Esposito did their part to uncover all the minor details that tie up all the loose ends. However, those two almost always come across as believable, even when doing the unbelievable. In Lanie’s defense, she could probably pull off the unbelievable, too, if she were handed lines that made some sort of sense.

– The case was a minor detail this week, so there isn’t much to pick apart for those of you wanting to know what’s right and what’s wrong as far as the police investigation goes.

– I did find it ironic that a local TV news break popped onscreen during a commercial break, and it showed a close up of police cars and crime scene tape—another shooting in Savannah (The umpteenth shooting this year). Then a woman appeared who was obviously responding to a reporter’s questions about the deadly event. Her only words were, “I ducked down because I don’t do bullets.” Now, doesn’t that sound like something Castle would say?

– Castle was definitely entertaining this week. He delivered some pretty good lines and even dazzled us with his sword-fighting skills. Although, I did think that scene went on a bit too long. So long, in fact, I began to picture Stana Katic off screen impatiently looking at a clock on the wall wondering if or when they’d ever finish. By the way, it was a huge plus this week that Beckett managed to keep her gun AND, she wasn’t taken hostage or knocked out. Not even once!

– As I stated earlier, we all knew the cousin was the killer from the first moment we laid eyes on him. So no excitement there. And, his confession was a typical (yawn) Castle-ish confession—two or three questions and the killers give the typical “look down and a heavy sigh” before pouring out their heart and soul to Beckett.

Alexis… Her moving in with (I don’t even want to say his name, so I’ll call him “that guy”) that guy is SO out of character for her. For six years or so, we’ve seen Alexis as the strong one…the smart daughter who’s sort of raising her child-dad and keeping a watchful eye over him so he doesn’t do anything that’s too stupid. She was grounded, smart, and extremely loving and supportive of all things Castle. And she’s seen the relationship between her dad and Beckett grow and grow and grow to the point where the next step was inevitable. Yet she’s hurt and angry that her dad proposed while she off was playing Jane to “That Guy’s” Tarzan, a banana-picking, bee-counting fruitcake…I mean, fruitarian.

By the way, an article in the “No Meat Athlete” reported—A practicing fruitarian for over three years, Michael Arnstein eats nothing but lots of fruit and the occasional raw vegetable. Arnstein said he devours 30 pounds of fruit a day—as many as 30 oranges, five cantaloupes, a watermelon, and a salad with five pounds of tomatoes. Consuming 40 to 50 bananas a day is a common occurrence for him. He also claims that 10 to 15 Valencia oranges is the perfect post run snack.

Actor Ashton Kutcher, who, for a movie where he plays Apple founder Steve Jobs, adopted Jobs’s fruitarian diet for one month. “I ended up in the hospital two days before we started shooting the movie,” Kutcher told reporters at the Sundance Film Festival. “I was doubled over in pain, and my pancreas levels were completely out of whack, which was terrifying, considering everything.” Jobs died in October 2011, after a long battle with pancreatic cancer. (U.S. News – Health).

Anyway, this episode was just so-so for me. It definitely wasn’t memorable, but it was, however, wonderfully absent of bombs, tigers, doomsday scenarios. Still, I long for more realistic scenarios. You know, the ones with Zombies. And I definitely miss the mystery-writing Castle who likes to relax while playing poker with his writer-buddies, such as Michael Connelly.

Finally, Pi has got to go!