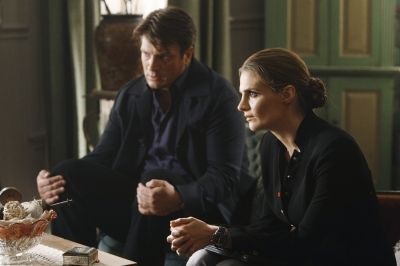 Last night’s episode was cut from a different cloth than what we’ve seen so far this season. And all I can say is…THEY’RE BACK!

Yes, Beckett and Castle returned to the fun and quirky crime-solving duo that fans fell in love with so, so many episodes ago. And I’m betting Melanie will absolute gush over this one. Let’s see what she has to say before I get into the police procedure. You’re on, Melanie.

Demons. Ghosts. Paranormal activity. Whether or not you believe in any of that, this was a fun episode. The inciting incident: A ghost hunter dies inside a locked haunted house. Castle believes in ghosts, and Kate, of course, does not. The fast pace and clever writing kept me interested, and I cracked up several times… especially when Rick called spirits “apparition-Americans” after Kate threatened to send him home if he said the word “ghosts” again. Tee hee!

The episode contained plenty of togetherness for Rick and Kate, too, when they were trapped inside the haunted house. I really enjoyed their banter but could have done without the rats. Can you say ick factor? Even with all the togetherness, though, we didn’t get much real “relationship” movement — unless you count the failed double date between Ryan and Jenny and Lanie and Esposito. Jenny blew it when she asked Esplanie the not-so-cryptic question: “So, when are you guys getting married?” That scared both of them to death — so much so that they decided to cool it for a while. To take a break until they know what they both want. Yikes!

And don’t forget about Alexis bemoaning her long distance relationship with Ashley, who’s off at Stanford all the way across the country. Her talks with Rick and their father-daughter zombie movie bonding time bookmarked the show, and I enjoyed that, too. All in all, this was one of this season’s best episodes, IMHO. Classic Castle.

Can’t wait for next week, when Rick and Martha are taken hostage during a bank hold up. They have got to be two of the most annoying hostages EVER. What do you think?

There weren’t a lot of police gaffes this week, and I’m glad. I’m glad, because it gave me a chance to watch a truly fun episode that was leaps and bounds above what we’ve been subjected to so far this year. So, kudos to the writer. Good job.

The police work in this episode took a back seat, however, there were a couple of tiny things I’ll point out.

– The blood spatter at the crime scene looked more like a drunk painter had an accident with a leaky paint can. Lanie’s description of severed arteries did not match the low velocity drip patterns we saw on the floor. Instead, we should have seen some spatter patterns that looked like they’d been squirted from a water pistol. Remember, arteries are under pressure, which causes blood to spurt from openings (cuts, tears, etc,) with each beat of the heart.

– Beckett said one of the suspects had Motive, Opportunity, and Means (MOM). I liked that reference, because the person who has all three is normally the killer (rapist, robber, burglar, etc.). So use the MOM theory when writing your villain, killer, etc.

– I’m kind of curious how Beckett’s sidekick learned that one of their suspects had a paper route 20 years ago. Possible, but doubtful that anyone would have a record of it. If so, why would police have thought to search for it? What would have made detectives dig into the history of the city’s paperboys?

– How did Beckett arrive at the conclusion that bed made the scratches on the attic floor? The marks sort of looked like chop marks on a cutting board.

– Lanie said that preliminary tests indicated the skeletal remains found in the attic had been there for twenty years (exactly the time-frame for this murder). Wouldn’t ambient temperature, humidity, and rodents gnawing at the flesh and bones play a part in how quickly the body decomposed? How would they have determined all this in a day?

– How convenient that Esposito traced a light bulb back to the owner of the house in mere hours, and all by using the serial number on the bulb…yeah, right. That could happen…sure it could. (Yes, I’m being sarcastic).

In the closing scene (for once, I didn’t guess the killer’s ID) with the killer, Beckett stands there talking to the guy with her gun aimed as his midsection. Well, she should have cuffed the guy immediately. If not…well, he turns out the lights and gets her gun away from her. Duh… That’s why you cuff first, ask questions later. Safety first, Beckett. Tsk, tsk. Shame on you for almost getting killed.

Then, the bad guy points Beckett’s gun at her for what seems like ten minutes before the posse comes in to make the arrest. In real life, folks, the officers should have made Swiss cheese out of that guy the moment he touched her gun. Taking a cop’s gun to avoid arrest is a  pretty good clue that a suspect is up to no good and probably means to kill them, you know. Actually, the team should have moved in the second the killer dropped from the ceiling. Why place Beckett and an unarmed Castle in jeopardy. Oh, that’s right, this is entertainment TV. Sorry, for a moment I forgot where we were. 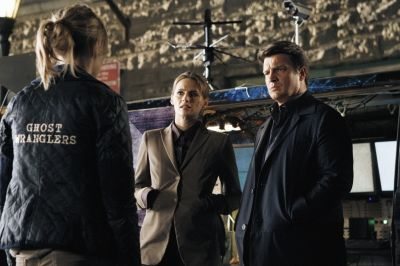 I was asked to pass this information along to our readers. 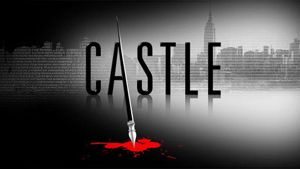 A Castle Fan Charity Convention will be held Saturday November 12, 2011 at the Airtel Plaza Hotel, Van Nuys. This is the first Castle fan convention to be attended by members of the “Castle” cast and crew.

The one day event will include two Q&A sessions on stage, a charity auction and those attending the event will be able to purchase in-person autographs and professional photos with the guests. Tickets for the exclusive Meet & Greet lunch have sold out but a standby list is in place should more tickets become available.

Guests announced for the event so far include “Castle” creator Andrew Marlowe, actors Seamus Dever and Jon Huertas and writer/producer Terri Miller with the possibility of more guests to be added.

Charities being supported this year include: The Young Storytellers Foundation, Puppies Behind Bars and Best Friends Animal Sanctuary.

The Castle Fan Charity Convention will be hosted by CastleTV.net in association with the California Browncoats.

Tickets are available by going to the event website www.castleconvention.com

Please consider Tweeting our event to your followers and mentioning us on Facebook.

Castle Convention is a one day charity event to be held Saturday November 12, 2011.

Guests from the Castle cast and crew will be attending the event including Andrew Marlowe (Creator/Showrunner), Seamus Dever (Detective Ryan), Jon Huertas (Detective Esposito) and Terri Miller (Writer/Producer) with the possibility of more to be announced at a later date.

100% of proceeds will be donated to our nominated charities which include: The Young Storytellers Foundation, Puppies Behind Bars and Best Friends Animal Sanctuary.

Events for the day include:

Q&A Sessions:
Writers Q&A sessions on stage with creator Andrew Marlowe and writer/producer Terri Miller with two other writers to be announced pending other commitments. Cast Q & A session on stage with actors Seamus Dever and Jon Huertas and possibly others to be announced soon. During the Q&A sessions fans will have the opportunity to ask questions from a microphone set up on the floor. Fans will also have the opportunity to meet the guests during autograph and/or photo sessions.

Meet & Greet Lunch:
Gold and Meet & Greet tickets are also available sold out. Those holding these tickets will attend an exclusive event giving them the opportunity to chat with our guests casually over a light lunch, these tickets are limited to just 30 to guarantee an intimate setting.

Charity Auction:
Several items have been donated and will be auctioned during the event with all proceeds going to our supported charities.

Autographs & Photographs:
All attendees will have the opportunity to purchase in-person autographs and professional photographs with our guests.
This event is being run by CastleTV.net in association with the California Browncoats. More information about the charities being supported can be found on the charities page. The event is in no way affiliated with ABC.