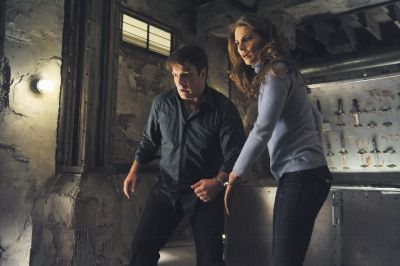 This was an episode that, for me, was the return of the show that its fans fell in love with way back in season one. It was extremely good, well-written, and the actors were at the top of their games. Even Lanie was good. Her handlers finally, finally, finally gave her something to work with…real forensics-speak. Anyway, more on morgue-talk a little later. For now, let’s enjoy recapping a fantastic show. Melanie…

Once again, we had to wait two long weeks between episodes… but to me, the wait to watch Cuffed was totally worth it. So much physical proximity — with Rick skimming his hand along Kate’s bare midriff after finding the needle mark on her back, their suggestive positions while trying to move the freezer (tee hee!), and her climbing on top of him in an attempt to escape the creepy basement room. Then there were Rick’s attempts to protect Kate, their terrifying battle with the tiger (a beautiful, scary animal), and the episode’s incredibly hot ending, when Rick substituted the word “hitched” for “cuffed”… and Kate said there would be a next time with the cuffs, only without the tiger. All of that played into my enjoyment.

What’s not to like? I mean, really! The episode moved quickly, starting with the two of them waking up on a mattress in the basement room handcuffed together with no idea how they got there. I loved the way they pieced together the story with flashbacks. Such great banter. And the way they talked about Esplanie’s (Esposito and Lanie’s) relationship… priceless. “They both want to be together, but neither of them will admit to it.” Familiar, much? Once they figured out what had happened, the storyline moved rapidly back and forth between Kate and Rick in the basement and Ryan, Esposito, Lanie, and Gates trying to find them. Throw in the DEA, a creepy old woman, and exotic animals… and I was riveted. Of course, my main interest was Kate and Rick and their power struggle in that basement as they attempted to escape. Being cuffed, they were limited as to what they could do, but they did seem to work together pretty well most of the time — once they decided who was going to lead. And they were so close to each other all the time. That made my night, I tell you.

I wanted more, of course. A hug, a kiss, anything to help propel their relationship forward… but I’ll take cuffed to each other in the dark — with the two of them comfortable with their forced proximity. I love this show! Mystery, suspense, humor, romance… and a tiger = perfection.

The next episode, Till Death Do Us Part, won’t air until January, but it will feature Ryan and Jenny’s wedding. I don’t have any details yet, but rumor has it that Kate and Rick and Lanie and Esposito will all react to the nuptials in a positive way. Sounds very interesting. Too bad we have to wait until the new year to see it.

This show was all over the place. So much so, it made me wonder if the two writers had experienced a 60’s moment while jointly putting pen to paper. Don’t wrinkle those brows. You know exactly what I’m talking about. However, it was all over the place in an extremely good way, beginning with…

I didn’t think it was possible, but this show has come up with a new nickname for…well, you know…that “special” mommy and daddy time. Yep, and from this moment forward, thanks to this episode, that amorous act should be referred to as “Pushin’ The Freezer.” If beads of sweat didn’t pop out on your forehead during that scene, well, you’re just not human. Whew! 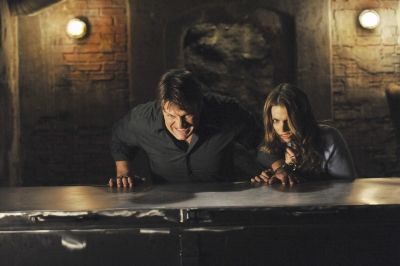 On the other hand, how were they able to stand that extremely heavy freezer on end when the two of them together couldn’t budge it even an inch when attempting to slide it across the floor? Hmm…

It was a bit difficult to focus on the police and forensics side of this show, since the main focus was on Beckett and Castle who, while locked away in a basement, had to avoid becoming a snack for a very large tiger. But, I’ll briefly mention Lanie and her, for the first time ever, believable depiction of a medical examiner. She was actually quite good, and her comments and science were also pretty good. 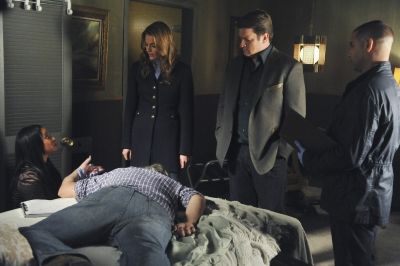 And, she still had time to be playful in scenes with Espo. Why can’t the writers do this in every episode? Hopefully, they’ve seen the light and won’t backslide. We’ll see. But, this time, Lanie actually added to the show. Great job.

What about the creepy, old hillbilly lady in the cage? Viewers will have nightmares for a month after witnessing that sight. But still very cool. The old lady’s sons were equally as creepy. I’m not sure, but I think I’ve arrested each of them in the past…many, many times throughout the years. Those three are the typical Friday night arrests for officers all across the country. A little drinkin’. A little fightin’. A little shootin’. Then it’s time to call the law. Yep, every single Friday night.

– The fingerprint match-up on the screen. You know, where an image of a driver’s license popped up after Ryan finished unscrambling the board (anyone remember the Soul Train Scramble Board?) This was a dumb scene, but it works for this show. 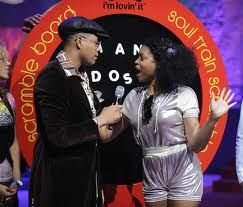 Gates is still Gates—obnoxious. Still, she played a better part this week. Funny thing, I saw the former captain (Montgomery) playing the part of a bad guy in another show last week. He was killed there, too. Not a good year for that guy.

Enough of the police stuff. Let’s have a look at my favorite lines from the show.

1. “Okay, you can put my shirt down.”  Beckett to Castle after he’d examined the needle mark on her lower back.

2. “Let me get him back to the morgue.” Lanie, speaking about the dead body. Who knew medical examiners offered their findings post autopsy, not before the slicing and dicing? A novel concept for this show, and I like it.

3. “They both want to be together but neither will admit to it. Why do they do that to themselves?” Beckett on Espo and Lanie. Pot calling the kettle black?

4. “Are you willing to cut off your own hand?”  Beckett thinking Castle had offered a solution to removing the handcuffs.

5. “Whoa, mine! No, I was talking about yours.” Castle in response to Beckett’s “hand” question?

6. “Drop the hardware, boys, or I’ll blow you both away.” Creepy granny to Espo and Ryan, who, by the way, should’ve sent granny to hillbilly heaven the second she brandished the shotgun. Instead, they stood there until the situation grew far worse.

7. “I still have a bad taste in my mouth.” Castle referring to the “sleepy drug” granny and the boys used to send Castle and Beckett into la-la land.

Finally…“Next time?” Castle’s response to Beckett’s sly promise that there’d be more playtime while in handcuffs.

Skimmers, Scammers, And Slicksters: Tis The Season
Scroll to top