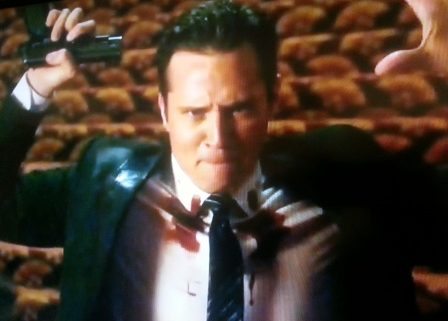 “A lot of guys, when they retire, they just…drift.” ~ Detective Kevin Ryan

I enjoyed this Ryan-centric episode and thought Seamus Dever did a fabulous job. Kudos to him. Parts of the show raced by more like an action movie than a TV show, and those kudos go to the director and the writers, even though I guessed right away that Ryan’s brother-in-law was up to no good. I’d pegged him as the murderer and was glad that didn’t turn out to be the case.

Kate and Rick only played minor parts in this one, so I really don’t have too much to blog about. I’ll leave the case notes Lee and zero in on the big revelation they gave us in the waning minutes of the episode: the disclosure that Kate is apparently studying for the captain’s exam. I doubt many people were too surprised, because her professional restiveness drove much of the action in last week’s episode and affected her connection with the visiting inspector from Hong Kong.

Kate’s decision certainly didn’t surprise me. Sure, becoming a captain would take her out of the field, something the Kate Beckett of three seasons ago would never have wanted, but now things have changed. Moving up the ladder would not only give her more freedom and better office hours, but would also provide more of a buffer between her and the bad guys, making it a better career choice should she and Rick decide have a baby. She doesn’t want to have a child and then get killed like her mother did. Methinks Kate definitely has the idea of a child in mind, but only time will tell if I’m right.

Only five more episodes of Castle this season… and possibly the series. Sigh. Still no word on contract negotiations. I’m keeping my ear to the ground and will let you know if I learn anything about the show’s possible renewal or the cast’s disinclination to re-sign.

The promos for next week’s show made me laugh, so hopefully it’s a funny one. I’m looking forward to some classic Castle.

I agree with Melanie. I thought Seamus played his part extremely well. Not only did he properly represent a police detective, he displayed the sometimes extreme raw emotion that comes with the job. It’s a side of police work the public rarely sees, so for a non-cop actor to deliver a performance of this caliber is, well, nothing short excellent.

I wonder, though, if this episode is a preview of sorts for a spinoff? After all, Dever has been hitting social media pretty hard lately. Hmm…

Hey, did you know that Seamus Dever is cousin to a well-known mystery writer, a writer who’s attended the Writers’ Police Academy a few times?

Anyway, back to Ryan and his role. He was working a private security detail, which many cops do to earn extra money, when a shooting occurred. Unfortunately, the person he was protecting was wounded and the woman standing next to him was killed.

I once taught executive bodyguard training and, believe me, the stakes can be pretty high. It’s not a simple job for simple people. In other words, there’s more to the job than being 7-feet-tall and 350 lbs. So, speaking from years of experience, I also thought Dever handled himself well in this part-time role.

A failed assignment can be extremely devastating for anyone whose duty is to protect someone from harm. Somehow Dever managed to get that across to his audience without speaking a word. His eyes told the entire story in a single scene.

Okay, enough goo-goo ga-ga fawning over Seamus Dever. Let’s delve into the rest of the show.

Everyone knows I’m not a fan of Castle when the writers go for “serious.” They just don’t do it well at all. However, this week had it’s good moments. And, of course, it had the typical Castle-esque mistakes. For example, when Ryan was in the alley preparing to arrest his brother-in-law. He pulled out his pistol and…what did he do? Yep, he racked the slide. NO!!!!!! Cops carry a round already loaded into the chamber. To rack the slide at this point would eject a round out onto the ground. He’d be a “bullet shy of a full magazine,” which is a great description of the writer who pens this sort of thing.

We all knew that Chambers was not the killer because he was the first red herring to plop his butt into the interrogation hot seat. So it was a waste of time for him to utter even a single word. Besides, it was during the limo ride when it became apparent that the politician’s wife would pop a cap into the female assistant. You caught that “clue”, yes? But, as usual, she, too, was merely a typical Castle red herring via the standard boilerplate script.

Using laser trajectory or stringing to determine where the shooter stood when firing the shot would have been a routine act in a case such as this one. Not something unusual or out of the box as they made it appear in the show.

Gates ordered someone to “put out an APB” again this week. These folks switch between APB and BOLO about as often as Kayne West sticks his foot in his mouth. It’s BOLO (Be On The Lookout), unless you’re watching Dragnet reruns, because that’s the era when APB (All Points Bulletin) was popular.

All-in-all, I enjoyed this episode. And to Seamus Dever, Good job!

Oh, would somebody please get Tory a stool. It wears me out seeing her stand throughout an entire episode.

Followon TwitterSubscribeto RSS Feed
A Historic Train Ride Through California Countryside: All Aboard!