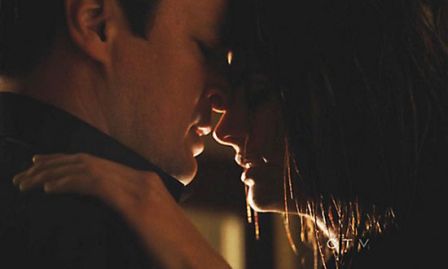 Well, IT finally happened. And, from the looks of things in last night’s episode, we could be in store for a few good laughs due to the newly-added twist (hiding Castle and Beckett’s steamy-hot relationship).

The season opener also delivered closure (sort of) to the never-ending “who killed my mother” saga, another storyline that had been beaten to death by the writers.

This season, though, has the potential to be fresh and exciting, and I hope the writers take full advantage of the situation they’ve created. And, speaking of excitement… I sensed Melanie’s squeals of delight as each scene played out last night. Now, there’s no holding her back after five full days joy (four at the Writers’ Police Academy and Castle on Monday night). So let the season of our good cop/bad cop reviews begin. Melanie, the floor is all yours…

This has been a l-o-o-o-n-g summer for me. A long, hot summer with no new Castle episodes after that delicious scene near the end of Always, last season’s bittersweet finale. I lost count of how many times I watched Kate and Rick kiss against that door. Not only did I almost wear out my Tivo, but I also read many wonderful post-Always fan-fiction stories. The Castle fandom has a plethora of excellent writers, and I think all of them wrote at least one.

Kate is confidant, yet tentative about their new relationship, and Rick is cautious but ecstatic. Yes, they’re a couple now, but during that first scene they abruptly decide to keep their union under wraps — for a while, at least — a difficult task, even though it’s fun for viewers. I cracked up as Kate tried to sneak out of the loft without Alexis or Martha catching her. Too funny. Keeping the secret from Ryan and Esposito will be even more difficult, I fear. Difficult, but fun.

I enjoyed this fast moving episode — the morning after scene, the race to find the file, Ryan’s desperation, Esposito’s anger, and Kate’s kickass moment with the senator — but I also wanted Rick and Kate to kiss. I mean, seriously. We were treated to lots of heated looks and small, intimate moments between them, including a sweet hug when Rick offers to take Kate away somewhere to keep her safe and Rick waking up alone in her bed the morning she goes after the senator, but we didn’t see them share a single kiss. Bah, humbug.

At least kickass Kate came up with a solution of sorts to neutralize the threat against her — a jerk senator who wields power like a club to get what he wants. I call it “a deal with the devil”, but hopefully it’ll work… and will allow Kate and Rick to concentrate on each other instead of the case.

Kate also made a deal with Gates to allow Kate to return to the precinct after she finishes serving her suspension. We knew, of course, she’d eventually go back to the 12th.  I mean, after all, the show is about a writer shadowing a detective… and Kate has such drive and derives so much pleasure from giving victims closure, I can’t see her doing anything else. Although I’m sure Rick would be happy even if she sold magazine subscriptions, because they’re together now.

I’m reeling with happiness, too. Finally, after years and years of being disappointed, a show is giving me what I want. A true romance. The previews of next week include a kiss, too. Wahoo!

Is it Monday yet?

Sure, the lovey-dovey, mushy-gushy stuff was great. And it worked well, I thought, for the show. After all, those two have been in a “I love you, do you love me, check yes or no” junior high relationship for so long… Well, long enough that I’d begun to pray for Lanie to make an appearance on screen just to give me a different pain in my…um…side to worry about. And you all know how I feel about the Voodoo M.E.

Anyway, on with the show, as they say.

– Beckett resigned, therefore she was no longer a police officer. So…when she kicked in the door of a private apartment she had committed breaking and entering, a felony. Next, I’m assuming it was Beckett or Castle who called EMS to attend to the badly beaten Mr. Smith. But where were the cops? EMS would have immediately called them to the scene, fearing for their own safety—door kicked in with patient badly beaten and tied to a chair…

The good thing about the scene was that someone had taken the time to be sure the doorjamb broke in all the right places when Beckett kicked it.

– Beckett and Castle paw through Mr. Smith’s files. I guess they weren’t concerned about leaving fingerprints in the apartment of a badly beaten man. You know, since they were there when EMS arrived, which would probably be a red flag to the first responders…like maybe those two were the people who inflicted the wounds on their patient.

– Some things never change. Beckett got kidnapped again, losing her gun to the same guy she lost it to last season. At what point does she become a liability to the department? Losing your gun ten times in a few weeks? Getting kidnapped the same number of times? Placing a civilian in the same dangerous situations? Of course, it’s the civilian (Castle) who usually gets her out of the tight spots.

– One thing has already changed this season. Someone, Espo I think, used the term BOLO in lieu APB, as they’ve said for the past four seasons. BOLO is the acronym for Be On the Lookout, the term that is most often used by today’s law enforcement officers. APB = All Point Bulletin. I haven’t heard that one used in many, many years, well, except on Castle.

– So Mr. Smith, in pain and agony and on the verge of slipping into either death or coma, utters an address to Castle. And we all know what happened when the dynamic duo arrived there. Yep, Maddox, after taking Beckett’s gun, triggered a bomb hidden in the floor, a bomb I’m guessing that Mr. Smith had placed there. So why, then, did Mr. Smith send Castle and Beckett there? Did he want them to blown to bits like the file?

– The file. Blown into a thousands of pieces. Scattered everywhere, among tons of debris that included body parts. And what about the huge fireball that came with the explosion? Yet, in spite of all of the above, Beckett and crew were able to piece together just the parts of the file they needed to nail the Senator, the guy who killed Beckett’s mother. Puhleeze….

– How and where did Beckett get all the stuff one the whiteboard she so conveniently had at home. Remember? Montgomery’s photo, photos of the other players, etc.

– How did Beckett get by the police guard stationed at the hospital. Don’t you think the officers might have at least asked for her name and/or ID?

– Why were the bad guys (the Senator and his evil sidekicks) only after Beckett? After all, Castle and crew also knew everything Beckett knew.

Still, the show was okay. And I’m truly glad that Beckett and Castle finally got together for a little “quality time.” Maybe, just maybe, we’ll see the show get back to its roots, with the funny and quick banter. After all, that’s what this show does best.