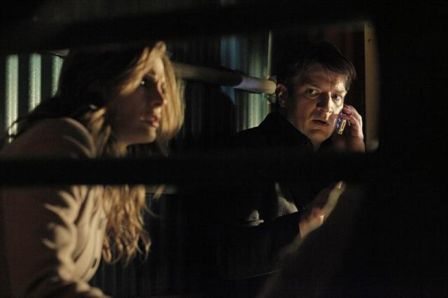 After Hours was just one of those episodes. You know what I mean. There’s no middle ground. Either you absolutely loved it, or you hated it from the depths of your soul. And I hated it. And I hated almost every second of it. From start to finish. Backward or forward. It was extremely disjointed…all over the place. So much so, that I could not, for the life of me, seem to find a storyline anywhere in all that running and hiding and hiding and running.

However, there were plenty of romance moments for the shippers, so I’m sure I already know how Melanie feels about this mess. Melanie…

Oh, wow! I absolutely loved tonight’s episode. It was funny and sweet, and chock full of Caskett moments. The show started with Rick and Kate hosting a disastrous “meet the parents” dinner with Martha and Jim at the loft that turned into Martha vs. Jim. She apparently found him boring and showed true disdain for his conservative lifestyle and love of baseball. Talk about uncomfortable! I was squirming, and I wasn’t even in the room with them. Rick and Kate were appalled and scrambled out of the loft at the first opportunity — when she received a call that a body had dropped. Turned out to be a priest.

Our dynamic duo sniped at each other about Martha and Jim while on the way to pick up a witness to the murder… bringing an edge to the old banter they’ve always shared. The edge came from this argument really meaning something. They wanted their parents to get along, and when they didn’t, it rattled them.

Mobsters accosted them at the door to the man’s apartment and took their phones, their wallets, and Kate’s gun and badge—Yes, Lee. Again. I know that made you cringe. Teehee!—and then they were forced to go on the run with the witness (an annoying little man) in the Bronx in the middle of the night after discovering someone had also stolen Kate’s departmental ride. Oops! So hilarious.

Esposito called the loft looking for Kate and Rick when they didn’t answer their phones, and Martha and Jim, who surprisingly was still at the loft, became alarmed and rushed to the precinct, where they holed up in the break room to wait for word about Kate and Rick.

While they were hiding with the annoying witness, he picked up on their sniping and the fact that Rick had said he and Kate came from different worlds—and then he played therapist, advising them their problem didn’t lie with their parents, but with the two of them. The look they shared after that comment was priceless. Kate later asked, “We’re in this relationship that makes absolutely no sense on paper. So… are we just kidding ourselves? What if this bubble bursts? What are we then?” Rick countered with, “Kate, we’re not our parents. And when I said ‘two different worlds’, I meant…” And then he was cut off. Of course.

After that, they’re torn apart without being able to talk further when Rick is elected to go for help after an argument about who should go, and Kate kisses him before he leaves. I loved that. Finally, some PDA!

Next, we got another quick glimpse of Martha and Jim at the precinct, and I was surprised by how well they were getting along… apparently bonding through their love for their children and bolstered by the idea that even though Rick and Kate were missing, they were still together somewhere, watching each other’s backs.

Except they weren’t. Rick had gone for help, and Kate had stayed with the witness. After Rick left, they guy talked to Kate about Rick and their relationship—after eavesdropping on their conversation—and he tells her, “Trust me. Living your life for now makes a lot more sense than worrying about the future”—a prophetic statement if there ever was one, seeing as he later turned out to the bad guy.

Rick is kidnapped by Mickey Dolan, the mobster the cops want for killing the priest, before he can summon help. Dolan gets info from Rick just by reading his facial expressions—using Rick’s non-existent bluffing skills—and then sends one of his guys after the witness… and Kate. This scares Rick. He’s afraid the guy will kill Kate.

Kate, however, fights off Dolan’s man with the help of the witness, who then turns on Kate and holds her at gunpoint. He binds her hands (in front, I might add) and forces her out of the basement. His plan is to find Dolan and kill him so he can’t turn state’s evidence against a rival mob family.

Dolan convinces Rick that he doesn’t want to hurt Kate or the witness. He wants to find out who killed the priest, too, because they guy was his best friend. So they sit tight and wait for the phone to ring… and when it does, it’s Kate. Rick is so relieved to learn she’s still alive. She won’t agree to help Dolan unless he gives her proof that Rick’s okay, so Dolan puts him on the phone. She tells him they need to do something fun soon, like take their parents to a baseball game. That was clearly a message of some kind, because Martha had just shown her disdain for the sport at dinner.

The witness takes Kate to meet Dolan, Rick, and the others at gunpoint and shoots up their car, terrifying Kate—only, they weren’t in the car, because Rick had picked up on Kate’s signal that trouble was brewing.

When he and Dolan show up moments later, relief fills Kate’s face. The witness is out of bullets, so Dolan starts to kill him, until Rick talks him down. Then the cops show up. Really? What took them so long?

Kate runs to Rick, leaps at him, and throws her bound hands over his head in a giant hug, saying, “I thought I’d lost you.” He grinned and said, “Never, never, never.” Wow! My heart melted. What a great scene. Beautiful!

He gives her back her badge and gun, courtesy of Dolan, and they take a cab back to the station — only to have Gates tell them Jim and Martha are there. Before Rick and Kate go talk to them, though, Rick tells her, “But you know what? Who cares if they don’t get along? They aren’t us. And… so what if we don’t make sense on paper? We don’t live our lives on paper. And if we did, we’d never be astounded… or surprised.”

And then they’re surprised to find Jim and Martha getting along. Amazing!

Such a hilarious, fun episode that was also filled with wonderful Kate-Rick moments. Squee! I’ll replay this one many, many times, I’m sure. Next week’s Christmas episode looks just as good, too. A dead Santa, Kate with possible cold feet, and more relationship talk. Yes! I can’t wait.

See, I told you. Even Melanie and I are on total opposites of this scorecard. She loved the show and I hated it. But what about the police procedure? How’d that measure up?

Well, the show opens with the murder of a priest. Next up…Lanie.

Beckett asks for the time of death. Lanie responds. “Between 7 and 10 last night. The likely cause of death was three (gunshot wounds) to the chest.”

And that was it. Short. Sweet. And to the point. Nothing stupid. Nothing bad. And no witch-doctory. And she was believable. So a big hooray for Lanie. Finally.

Unfortunately, that’s where my praise for the episode comes to an immediate halt. It was all downhill for me from this point forward.

For starters, did any of you catch Beckett’s instant hairstyle change? No? Well, it’s time for a replay, then. When she and Castle pulled up to the alley and got out of her police car, Beckett’s hair was pulled up into a short ponytail-like do. She takes two or three steps and suddenly her hair is down. Check it out.

A little less than eight minutes into the show, Beckett loses her gun to a couple of bad guys. And, of course, she also loses her police car. So now she and Castle go into hiding from the thugs. Oh yeah, tagging along is a little worm-like guy who’s is supposed to be a witness to the priest’s murder (Witness? Sure. He’s a witness, all right. Doesn’t every single wimpy, creepy guy on this show turn out to be a killer?).

So Castle leaves Beckett and mousey-man behind so he can save the day by using the phone at a nearby Chinese restaurant. Well, guess what? On a totally deserted city street, late at night, Castle doesn’t hear an approaching car. Yep, here come the bad guys, and they totally sneak up on Castle…while driving a vehicle! Now I ask you, have you ever been out at night, walking along lonely and quiet streets? Sure, you have. And you can hear cars at great distances, right? Maybe Castle is simply hard of hearing. Deaf, even.

So now Castle is kidnapped/abducted.

Then Beckett is abducted by mousey-man, who shoots a bunch of rounds at an empty car he thinks is occupied by the mobsters. Then, boss mobster appears from his hiding place (Castle tipped him off that mousey-man was the killer). So Mousey points his pistol at boss mobster guy, who promptly says, “We both know you emptied your clip into that car.” So mousey gives up. But…the gun couldn’t be empty because the slide wasn’t locked in the back position, which is what happens when a semi-auto is out of rounds—the slide automatically moves to the rear and locks open.

Okay, that’s about it for the police stuff, what little there was (thank goodness there wasn’t any more).

Oh, and again…Hooray for Lanie!

*One more thing. Every time someone mentioned the mobster’s name, Micky Dolan, I couldn’t stop myself from picturing the drummer from The Monkeys (Micky Dolnez).