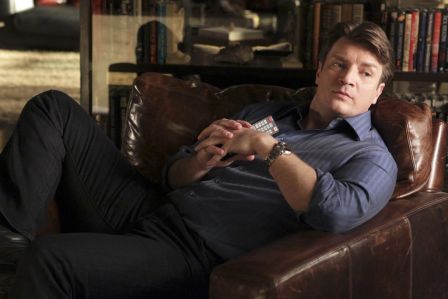 As far as the police stuff and Lanie go, well, grrr… And to make matters even worse for me, I pegged the killer in the first few minutes of the show.

Oh, and that crazy red-dot-moving-cell phone-user-map? Well, we brought in the big gun, Lt. Josh Moulin, to address that issue. Lt. Moulin is a nationally recognized expert in cyber crime and digital forensics, who just happens to be assigned full-time to the FBI as the commander of the Southern Oregon High-Tech Crimes Task Force / FBI Cyber Crimes Task Force. Many of you will remember him as an instructor at the 2011 Writers’ Police Academy. We’ll see what Lt. Moulin has to say about the “red dots” in a minute.

First, let’s get Melanie’s take on the show.

Episode 19, or rather, 47 Seconds, began with a bombing at a protest rally, a seemingly senseless event that killed at least five and left many others injured. Random victims who just happened to be in the wrong place at the wrong time. Their whole lives changed in a brilliant flash.

The fallout had a big impact on our dynamic duo. Kate tells Rick, “Makes you think of all the things you don’t want to put off anymore.” And the way she looks at him… as if she wants to tell him how she feels. Before she can, however, they’re interrupted.

Alexis, who is still interning in the morgue with Lanie, is also greatly affected by the carnage. She has to take a break while cataloging the victims’ personal effects. Rick takes her home and ends up talking about the bombing with Martha. 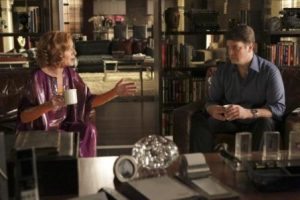 “Nobody’s tomorrow is guaranteed,” he says. Martha urges him to tell Kate how he feels before it’s too late. Why is he still waiting? Rick, however, is worried she’s not ready, yet finally decides to take Martha’s advice.

The next day, he approaches Kate with their customary coffee (coffee = love to our Caskett duo) and tries to tell Kate that he loves her — remember that at this point, he thinks she doesn’t remember him saying that after she was shot — only, they’re interrupted again. Of course! Grrr…

The case gets in the way, and they don’t get to talk again before they finally run down a prime suspect the next day. Rick drops off another coffee on Kate’s desk, then enters the observation room just in time to see her question the guy, who claims he doesn’t remember what happened because he was traumatized by the bombing — yet she refused to allow him to use that excuse. “I was shot in the chest, and I remember every second of it,” Kate says. “And so do you.”

So… she remembers the shooting and Rick’s I-Love-You, and yet she’s denied it for ten long months. Rick is devastated. He feels like a fool. A school boy hanging around the pretty girl at school who merely tolerates him. He has to get some air, so he leaves and goes to see him mom. Martha is sympathetic.

He goes back to the precinct in spite of his mother’s protests, trying to do some good, and walls of his feelings for Kate. He snarks at her, throwing out little comments that she just doesn’t get. She’s puzzled by what he’s saying and how he’s pulling away. The case, of course, requires her attention, so she can’t question him about it.

Finally, they get the man and his newswoman accomplice actually responsible for planting the bomb. At one point during the interrogation, Rick uses the term “sinning by silence” to describe the accomplice’s role in the bombing. He says, “It’s not smart. It’s not brave. It’s just cowardly.” And he looks at Kate. She’s obviously confused… yet surely those words have hit home in some way. I mean, really. She doesn’t get it, though.

Kate invites Rick and the boys out for a drink to celebrate solving the case. Ryan and Esposito decline because they’re really tired. Once they leave, Kate tells Rick, “I guess it’s just us. You know, now that the case is done, what did you want to talk about?” And he says, “Nothing. Nothing important, anyway.” No way will he reveal his feelings now.

She’s puzzled, to say the least. My heart broke for both of them. So much miscommunication — or rather, a lack of communication. Next week, the countdown is on to the finale… only four more episodes to go. And all of them are supposed to highly emotional, with Kate and Rick’s relationship taking center stage. Tonight, of course, a major secret came to light. A secret that crushed Rick’s heart and caused him to back away from Kate.

Will we get that much needed resolution in The Limey? I can’t wait to find out!

I’m not going to beat around the bush. I didn’t like this episode. Not at all. First of all, the investigation and police procedure were silly and unrealistic. More importantly, though, the relationship (or, lack of) between Castle and Beckett is downright dumb. Dumb, I say. No living and breathing species on earth acts this way…not for four or five years. Sure, a giggly mating ritual at the onset, but this? Come on. And now…well, I’ll leave it alone. Because it’s dumb, dumb, dumb.

Okay, the cop stuff (and Lanie).

– Gates. She’s horrible in this role and I cringe every time she marches on screen. I say we resurrect Montgomery. Please, please, please let him be alive, working in some undercover capacity. Perfect way to bring him back. Then he could shoot Gates and put us out of our misery (“Here’s a bullet just for you, ‘Sir.’).

– I did like it when they questioned the homeless guy, which is always a good thing to do since they’re out there, in the background, and see everything. However, why bring him to the office? They drove all the way down there, picked him up and brought him in, just to hear him say three or four sentences? Those interviews are normally conducted in the street, or inside a police car. BUT, cops tend to avoid placing unwashed street people inside their cars. It takes a long, long time to get rid of the odor. Seriously.

– Lanie. Any other time, Lanie can’t stop herself from spewing all sorts of nonsensical information. Not last night, though. She’d recovered bits of explosive-coated canvas from one of the victims, A HUGE PIECE OF INFORMATION, yet, didn’t bother to call anyone. Of course, in the real world, it would have been the folks in the lab who’d discovered the explosives, and they would have have kept the material in the lab, nicely packaged and sealed.

By the way, did you guys happen to notice all the dead bodies simply hanging out in Lanie’s little shop of horrors? They’d been there for hours too. Doesn’t she have a cooler? I ask, because that’s where they’re kept until autopsy time, not on gurneys placed willy-nilly throughout the morgue (in the corners, the middle of the room, etc.).

I guess Alexis, now a college dropout, I guess, will bypass medical school altogether and begin conducting autopsies and magically discovering and testifying to causes of death.

Mother Castle to Boy Castle – “Did you ever wonder why I never visited you at the precinct the first year you were there?” Why would she visit someone who was also visiting? He doesn’t work there. Never has, and he’s still a visitor. He’s a writer, not a cop. No training, remember? And that brings up another point. Gates handed Castle a pile of official documents/folders—witness statements—and told him to go through them. So what does he do? Yep, he takes them home. Think a defense attorney wouldn’t be all over that? “Your honor, the “writer” took the files home and did who knows what to them. We all know he’s in love with the lead detective, right. And he’d do anything to help her “solve” this case. He does write fiction, you know.”

– So Castle decides to be a big boy and tell Beckett how he feels about her, but Ryan walks up and interrupts. Now how boilerplate-scricpt-predictable was that? Just like the red herring suspects. I yawned through those interviews because you know it’s never #1 or #2. Besides, I picked the bomber within the first few seconds of the show. 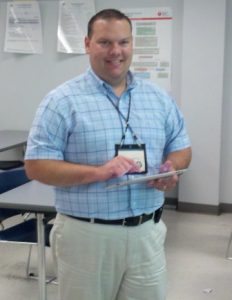 “While it is possible for us to do what we call a “tower dump” and find out every cell phone that communicated with a specific tower in a given time, we can’t show movement of cell phones like they showed in this episode.  Also, with the amount of towers around these days, we would have to send a search warrant for a tower dump for every cell phone provider that owns a tower which would cover the geographic location of the crime scene.

There are no maps available that show red dots where each phone is in proximity to another phone, especially showing just a foot or less difference.  How nice would that be, especially replaying movements as little as a few feet!  We can show movements of cell phones as they move in large movements and between cell towers, but not that close.” 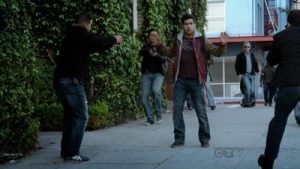 Lt. Moulin also brought up a couple of other great points about the show. Remember when Beckett and crew surrounded Bobby the backpack guy? Well, the detectives each had their weapons pointed at the guy which placed them in a crossfire situation. If Bobby’d ducked at the moment they started firing he’d have been the only person left alive, because the four cops would’ve filled each other full of NYPD-ammunition-induced holes. And what about the civilians in the background?

Also, Ryan grabbed the backpack and ripped open the top. Had it been a bomb it could’ve gone BOOM!. Step away from the suspected bombs, people.

– Beckett tells the news reporter/bomber that she found the garage remote detonator and it had her prints all over it. How’d she know they were her prints? Had the reporter ever been arrested? If not, why were her prints in the system?

And that brings me to the point where I tell Castle to grow up. Ask Beckett out a date. Have her over to play Monopoly. Something. Just do something. 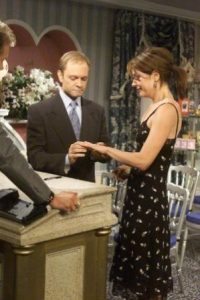 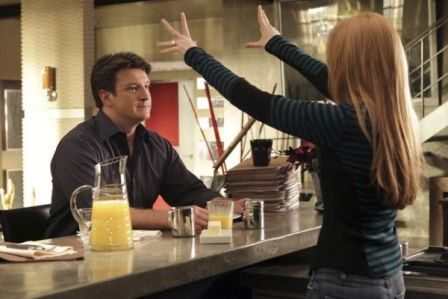 That’s right, Alexis. Scare some sense into your Dad. Someone needs to.

*By the way, what’s up with the shiny thing on Alexis’ ring finger?