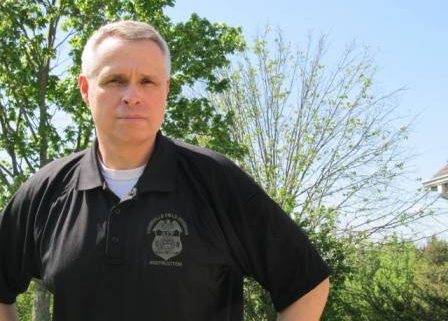 A couple of weeks ago, I got to be a rockstar for a morning.

There were three of us wearing badges at the school, all of us there to represent our agency. It was a public relations morning—a chance to go out and wave the company flag, to smile and be Officer Friendly. We were there to talk to several classes of grade school students about police in general. There were three of us there. And as we walked down those halls I kind of felt like a rockstar.

As we passed rooms, little faces pressed against windows, pushing against each other as they clamored. Teachers called out for order and the furor died to a dull roar, but then a few of the adults poked their heads out of doors or from down the halls, waving and smiling at us. Like I said, I was feeling like a rockstar.

Most of the times when we “visit people” they’re not happy to see us. As the saying goes, “It’s all fun and games until the cops show up.” When the blue uniforms show up, most people know someone’s going to jail.  And this is true with even kids. Countless times, I’ve been at a home on a search warrant and the whole family was seated on the couch watching as strange men and women in vests and carrying guns prowl through their belongings. The kids blame the cops for the intrusion, and they really blame the blue when one of their parents are taken away.  You can see it on their faces. When I do my job, I know people aren’t going to be happy with me, and I come to expect anger from the people I investigate. You just let it roll off of you and do your job. But it’s always difficult to keep the “Joe Friday” game-face going when it’s a ten year old with tears in her eyes as you take her Daddy away.

So that morning a few weeks ago, when I got asked to help do a school presentation, I readily agreed. I figured the kids would be happy to see us…I just didn’t realize they would be so excited. Their excitement made me stand a little taller. Walking down the hallway, the three of us in a line, I could almost hear a booming rock anthem playing in my head, and I almost expected the three of us to start walking in slow motion like you see in a movie. The rockstar air kept up when we walked into the first classroom and the kids were all sitting looking at us with bright eyes, all smiles and whispering. For about a minute I did feel like a rockstar.

Of course, then a six year old pulled the rug out. The honesty of youngsters.

That set off a flurry of squeals and shouted questions about the real star of the whole shebang, and put Shawn and me, the mere humans in our place.

They couldn’t have cared less about the two federal agents sporting guns and badges. They couldn’t have cared less about the two humans and the bag of equipment we carried. These girls and boys (and probably the adult teachers) were there for the star of the hour—Hope, an  eight year old Black Labrador retriever. Hope is officially termed an Explosives Detection Canine or as most people call them—bomb dogs. Of course the kids were excited—they were excited by our four legged agent. The kids kept edging closer to the star, and every time the teachers kept having to shoo them back on the carpet. Finally, the kids all sat and listened to us mere humans talk about being federal agents and what we did. I think it was the teacher telling them if they weren’t quiet they couldn’t pet the dog. But finally, we had their attention. 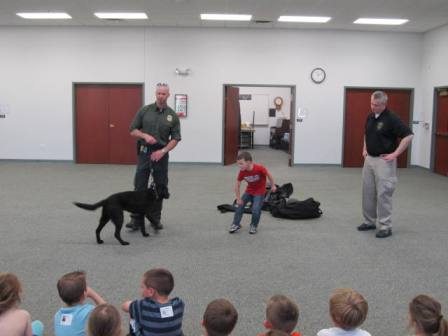 Shawn and I trotted out bullet proof vests and helmets and radios and the kids were impressed. At least, I think they were. They listened politely as we talked about our jobs as ATF agents, and specifically what our Canine handlers like Shawn do. 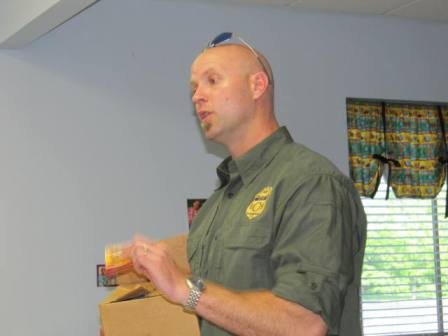 They seemed impressed that Shawn and Hope had traveled all over the country to special events and had helped provide security for several presidents and visiting dignitaries. Of course, I think the kids were most impressed that Hope got paid for an explosives “find” with a dog biscuit. Shawn explained that his and Hope’s job were to check out suspicious packages, and Hope’s job was to tell him if there was explosives in the package. 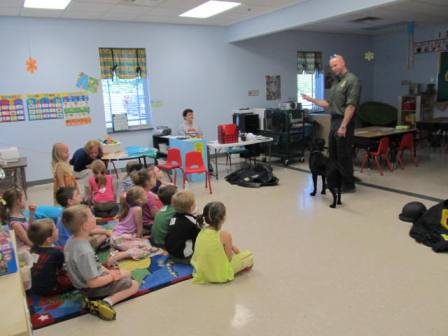 Hope’s a passive indicator dog meaning, whenever she has a “find” she sits and looks towards her handler (I have to say every time I see this in action, regardless of the handler, it looks to me like the dog’s saying, “Hey dummy there’s stuff right here you wanted me to find, now feed me.”). 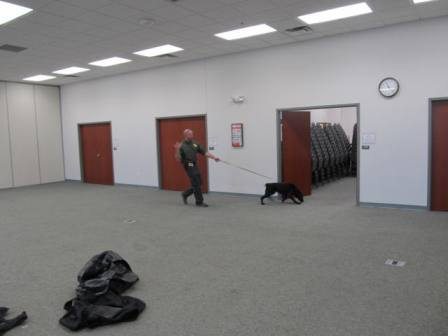 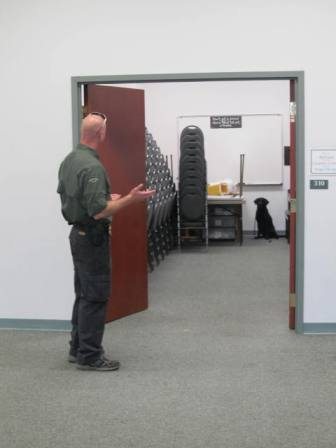 Still, I think the kids really only paid attention because their teacher said if they didn’t they couldn’t pet Hope. The kids were duly impressed when Shawn and Hope demonstrated her search ability. The kids loved it when Hope found the “bomb” (really just a cardboard box with a package of Blackcat firecrackers) we had hidden at the start of the talk.

It’s great to be around little kids and their boundless enthusiasm for life and their imagination. And as they say, you never know what will come out of the mouths of babes. One little boy said he thought we must be spies and that we probably had grappling hooks to climb walls. I came to think that all of these kids have parents who are speed demons, because when asked what they thought cops did, most all of them said stop people from speeding.

After the talk, we let the kids don the helmets and bullet proof vests and try out our handheld radios. The kids had fun. Tons of smiles in the too big equipment on their little bodies. 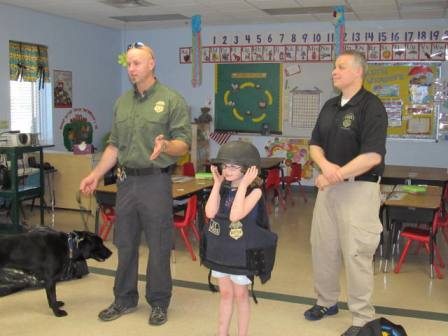 But the most smiles were from the patient dog who endured countless hugs and small little hands tugging on her head.

A lot of the time cops measure their job success in activity—arrests or tickets or citations. Investigators keep tally of how many cases cleared, narcs keep it in how much money and dope they seize, and those are all used for yearly reports and evaluations. Chiefs and Sheriffs keep track of crime rates and crime statistics, whether crime’s going up or going down. Now all of those things are important. But that morning I got to be a part of something just as important. That morning, I got to see the smile of a child.

And I got to be a rockstar for a morning.

Rick McMahan has been a federal Special Agent for over two decades. For the past 14 years, Rick’s worked as a Special Agent with the Bureau of Alcohol, Tobacco, Firearms, and Explosives (ATF).  He’s been an on the job trainer for new agents as well as a firearms instructor. Prior to working for ATF, Rick was a Special Agent with the Air Force Office of Special Investigations for 6 years. Rick works in central and southeast Kentucky. In his career, Rick’s investigated Outlaw Motorcycle gangs, militia extremists, and murder for hire conspiracies along with other criminal schemes. In his spare time, Rick writes and has had his short stories selected, not once, but twice for Mystery Writers of America Anthologies (DEATH DO US PART edited by Harlan Coben and VENGEANCE edited by Lee Child). His writing has appeared in numerous publications, including MYSTERY SCENE and CRIMESPREE mystery magazine.

Crime Scenes: The Do’s And Don’ts
Scroll to top