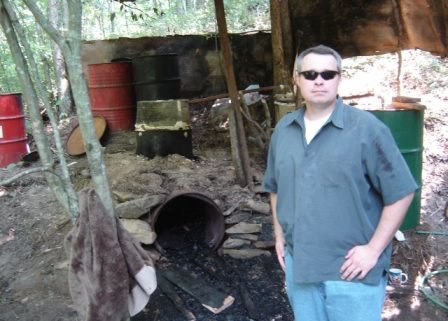 ATF Special Agent Rick McMahan has worked in federal law enforcement for over eighteen years. During the first six years of his career, Rick worked as a civilian Special Agent for the Air Force Office of Special Investigations where he worked a wide range of person and property crimes.

As an ATF agent, Rick has investigated extremist militias, violent street gangs as well as outlaw motorcycle gangs. In addition, he’s a firearms instructor and has served as an on-the-job trainer for new agents. In his free time, Rick enjoys writing, and he’s had short stories appear in anthologies such as—TECHNO NOIRE, LOW DOWN & DERBY and the Mystery Writer’s of America DEATH DO US PART edited by Harlan Coben.

Cop partners. What other stereotype of fiction and film is played over and over again to a well-worn track in audiences’ minds? Think of all of the “buddy cop flicks” we’ve all seen—one cop who’s flying by the seat of his or her pants while the other is more conservative. Stereoptypical for sure. Tired. Worn out. But readers gobble up books like this and audiences keep going to the movies.

Because a good partner is hard to find. I think readers and audiences all enjoy those kind of strong bonds of friendship. They crave those kind of commitments that are bonded beyond blood or marriage. So partner stories always thrive in fiction and film.

Because a good partner is hard to find.

Cops don’t always get to choose whom they’re partnered to work with. And a bad partner (just like bad bosses) makes work a drag. And good partners make it the best time you’re going to have. And you don’t realize how good of a good thing you have with a good partner until you have a bad one.

I don’t know why this is true. I just know that in my time in law enforcement, which is edging closer and closer to two decades, you have people you work with whom you respect and like, and others—well, others you wouldn’t cross the street to pee on if they were on fire.

In police work, you work day in and day out with someone as a partner. You come to depend on them and they depend on you. I’m not just talking about those times going through doors on warrants and risk-taking, but those times where you take up the slack in paperwork when you’re partner’s overwhelmed or falling behind. You watch out for each other. You take care of each other. You spend more time with each other than you do with spouses and families. And you develop a bond that goes beyond work.

Writers talk of the one ‘bell-ringing’ scene that defines a character or relationship. I can’t adequately explain the depth of what a good partnership is in words, but I do have one event. One strike of that bell…

Several weeks ago, my father suddenly passed away. I was devastated. Friends and co-workers sent cards, emails and called to give their condolences to my family and me. My father’s funeral was out of state and was on a Friday evening. I was standing with my mother and brothers at the front at my father’s casket talking to the folks who came to pay their respects to my Dad. Then, at the back of the room, at the end of the line I saw two people I didn’t expect—ATF Special Agents George Huffman and Tony Zito. George had the dubious assignment as my training officer when I first came on the job. And for most of the I was in Louisville, Tony and I were partnered together. Five years ago, I was reassigned across the state. Though we occasionally emailed or talked at statewide training, I didn’t see George nor Tony on a regular basis.

I never expected them to drive four and a half hours on a Friday night to attend my Father’s service.

Yet there the two of them stood.

Our handshakes turned into heartfelt hugs and I was fighting back tears.

Those five words define the meaning of partners.

*Special Agent McMahan is an instructor for the Writers’ Police Academy. Rick’s photo above was taken at a liquor still that had been recently raided. During the raid, Rick was on the side of the good guys, not the moonshiners.