ATF Special Agent Rick McMahan has investigated extremist militias, violent street gangs as well as outlaw motorcycle gangs. In addition, he’s a firearms instructor and has served as an on-the-job trainer for new agents. In his free time, Rick enjoys writing, and he’s had short stories appear in anthologies such as Techno Noire, Low Down & Derby and the Mystery Writers of America’s Death Do Us Part edited by Harlan Coben.

The Coming War (Or THE CARTEL WARS) 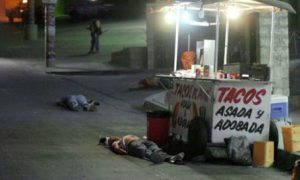 There’s a war going on that threatens the security of the United States. I’m talking about a place where–

Organized terrorist groups kill journalists, politicians and even citizens who dare oppose them.

Organized terrorist groups slaughtering each in masses and dumping the holes.

In four years, this war has claimed almost 30,000 lives, including the lives of over 2,000 police and military members.

I’m talking about Mexico. Welcome to the realities to the drug cartel violence south of our borers. In 2006, President Felipe Caldiron began a concentrated effort to root out drug organizations which have permeated the very fabric of Mexico. Of course, these organizations moving tons of illicit drugs through Mexico have no desire to “go quietly.” These groups, including a cartel group (Los Zetas) which originally was an anti-narcotics enforcement military group (yup trained by American military and police), have responded with an ever escalating campaign of violence and terrorism.

In fact, I bet most people read those four lines I wrote at the first and thought of Iraq or Afghanistan, but these are all things happening in Mexico. Whether it’s a group of gunmen using military hardware and training to ambush police and soldiers or beheading people and dumping their bodies, the cartels and terrorists are using the same tactics with similar goals—bending citizenry and political system to their wills. In 2010, Mexican drug cartels even took another play from the Middle-Eastern terrorist play book and used car bombs.

Here’s the difference between the violence in Afghanistan/Iraq and in Mexico—part of the Mexican violence is spilling over here in the United States. Not in some abstract way, or inspiring like minded people homegrown groups, but the cartels themselves have taken to operating in the United States. For instance, Phoenix Arizona is now in second place as the kidnapping capitol of the world. In 2009, a United States Department of Justice (USDOJ) report stated that there were 267 reported kidnappings in the Phoenix area. That’s close to 1 kidnapping a day. And that’s the reported kidnappings. The majority of kidnapping victims are parties of the drug trade, either because the victim hasn’t paid a debt or other criminals decide to rob the drug dealer for money or drug—either way the victim of the kidnapping is not likely to report the crime. Try to imagine how many more unreported kidnappings there are, two times. Three times. What number? 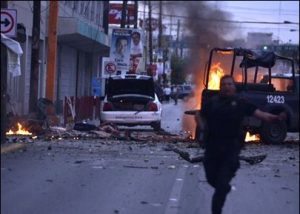 The drug war is even affecting how people in the United States travel. So porous are American borders and so rampant is the violence along the southwest border by drug gangs, that I’ve heard that there are official signs by government/law enforcement posted on roads. These signs warn travelers not to go farther south for fear of their safety. Almost like, “enter at your own risk” signs. Stray rounds from bullets zip across Mexico into American border towns from gun battles so fierce that they are akin to military combat like American troops are fighting in the Afghanistan.

Even violence against American law enforcement seems to be on the rise. Though, we can’t say how many assaults to law enforcement can be linked to Mexican drug cartels, there is one interesting exception, in my opinion. In the 2010 USDOJ/NDIC report on US Southwest Border Smuggling and Violence, the report cited that violence against US Border Patrol agents rose 46% from FY2006 to FY2008. The author of the report implies the assaults may be related to illegal immigrants and human trafficking. I don’t buy that. I’ve never worked the Southwest border, but I’ve spoken to many people who have worked as Border Patrol agents in the southwest. Universally, they’ve all noted how compliant illegal immigrants are when caught. It’s almost like a game of tag. You touch them and they stop. They’re compliant. They may run, but once a Border Agent “lays on” they comply. 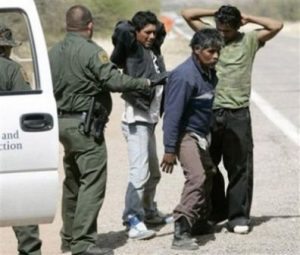 So, why would assaults against Border Patrol agents rise?

Well, here’s my thought— what if you’re someone smuggling drugs across the border? First of all, you know if you’re caught with the drugs you’re carrying you’ll face a lengthy prison sentence in America. More importantly, you, and probably your family will be held accountable for the load of drugs you’re carrying. I don’t know of any drug cartels that take IOUs or have payment plans. Other than a shallow grave.

So if you’re part of a criminal drug cartel, and you are already in the life of crime where violence is your accepted norm, even violence against law enforcement, pulling the trigger against a cop is easy. Remember the statement at the first—-10,000 victims in this war in four years. In those four years 2,000 were Mexican military and police officers killed. 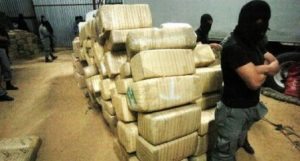 The Mexican drug cartels are here in the United States. Their drugs are here. There people are here, and their mindset of violence is not far behind.

Note: I originally write this in late November 2010 when Lee was asking me if I had anything else to do as a guest blog. I put the article away, intending to edit it. The holidays came and I still hadn’t done the edit. In light of recent events, it would seem that I’m right. Mexican violence is here.

On December 14, 2010, US Border Patrol agent Brian Terry was killed by a gang targeting illegals. Agent Terry was shot by a criminal wielding an AK-47.

On February 15, 2011, while working in Mexico, US ICE Special Agent Jaime Zapata and his ICE partner were shot by Cartel members in an ambush. Special Agent Zapata was killed and his partner wounded. 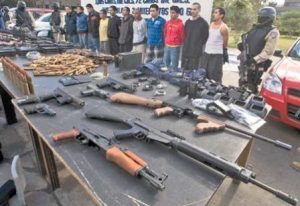 The Cartel Wars are here.

*Agent McMahan is a featured presenter at the 2011 Writers’ Police Academy.