When someone commits a crime and is subsequently arrested for the offense, they instantly become a part of the “system.” They’re reduced to a case number and a few papers inside a file folder, like those seen above and below. 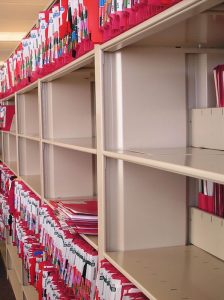 Each of the red folders contains the file of a criminal case. They’re brief excerpts of a person’s life. A point in time when they decided to break the law. Sometimes, the things these people did are the same as things everyday people have done but were not caught (possession of small amounts of marijuana, for example).

Many of these “red folder people” are currently sitting in jail waiting for their day in court. Perhaps they’re locked inside a cell because they couldn’t raise the cash needed to meet bond requirements. Or, perhaps a judge felt they were a flight risk so she ordered them held under no bond status until trial.

Others, though, are out and about, working, playing, and tending to everyday wants and needs while the wheels of justice churn slowly toward their trial dates. Soon they’ll know their fates. Some will receive probation. Some will have charges dropped in exchange for performing community serve, and some will be sentenced to serve time in prison or a county jail. Others will simply go free with either time served or by having been found innocent of all charges.

One thing will remain a constant during the process, and beyond, and that’s the case number assigned to the red folder. It will remain attached to the offender’s case from day one until the record ceases to exist, if that point in time ever arrives. 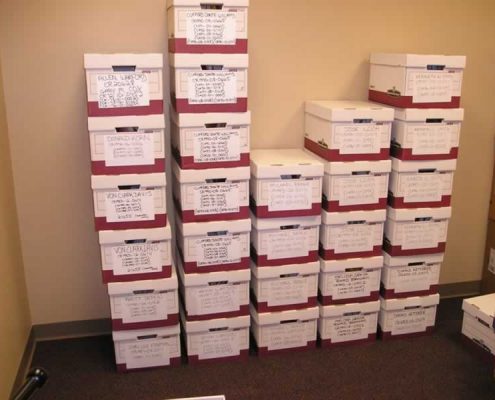 Inside the vault in a courthouse complex.

A short walk down red-folder-row in this particular courthouse records complex took me to a large walk-in safe/vault, much like what you’d expect to see inside a bank. This vault, however, contained something quite different than bundles of currency and sacks of gold coins.

Instead of mounds of cash, this steel- and concrete-clad room held a meager collection of office supplies and five neatly stacked columns of bankers boxes.

What, you might ask, is so important about twenty-eight bankers boxes that they’re all lined up like a row of soldiers standing at attention inside a locked bank-type vault? Well …

Yes, those cardboard boxes you see pictured are all that’s standing between life and death for several men and women. They contain the details of each case—the words and evidence that could convict, or on appeal, change the outcome from death to life in prison.

Some whose case notes are stored inside the boxes would go on to accept plea deals to spare them from an appointment with “the needle.” Others are no longer in the system. Their day has come and gone.  A few still await “the end.”

I can’t begin to describe the feeling I experienced the moment I crossed the threshold of the vault. Eerie to say the least, and I suppose it was so because I’d personally witnessed the execution of a prisoner back in the 1980s.

To this day, I still picture images of serial killer Timothy Spencer sitting in the electric chair at Greenville Correctional Center, the facility that houses Virginia’s execution chamber.

That night, mere moments after Spencer’s gaze met mine, executioner Jerry Givens flipped the switch and the odor of burning hair and flesh filled the execution chamber. Spencer’s body surged and swelled and pushed against the restraints that bound him tightly to “Old Sparky.” Fluids spewed from behind the leather mask covering his face. His joints were frozen in place by the intense heat and burning. Sandbags were used to help straighten those joints once the body was cool enough to touch.

The prison doctor had to wait several minutes to allow Spencer’s body to cool enough to allow the use of a stethoscope to check for signs of life. That’s right. Too hot to touch without burning the doctor’s hands.

Last week, Arkansas executed four prisoners. Witnesses said about three minutes into the process the condemned man jerked and coughed for about twenty seconds. Some described the execution as gruesome and called for an investigation.

Spencer, like the men executed in Arkansas, is dead. His demise was what I, someone who’s seen more than his fair share of death, would describe as gruesome. I said it above and again here. Gruesome. Can’t stress the point enough.

Twenty seconds of movement and moaning … well, I suppose it’s all relative.

So choose your own synonym. They all describe what I saw—grim, ghastly, frightful, horrid, horrifying, grisly, dire, awful, shocking, appalling, repulsive, repugnant, revolting, and/or sickening. Your pick. They all fit.

The following is list of the inmates currently on death row in Arkansas.

May God have mercy on their souls.

Suicide By Cop
Scroll to top