The rules were simple. Write a complete story based on the photo above. The trick? The story must be exactly 200 words. Not 201. Not 199.

The Golden Donut contest attracts writers from all across the world, and to win is a true accomplishment.

This year we were extremely pleased and honored to have Michael Cudlitz, star of The Walking Dead, Southland, and Band of Brothers, join us to announce the winner of the 2014 contest. So, without further adieu, here’s Michael… 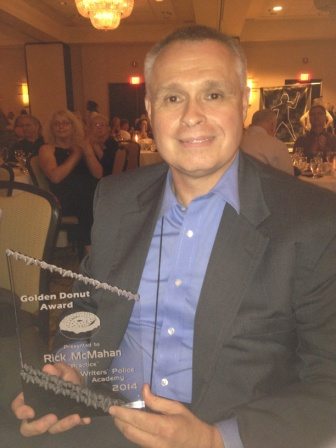 Jill strode down the darkened hall, her hollow footfalls in sync with the words drifting to her.

The training room door was open, a weak light escaping.

Every CPR mannequin was strewn across the floor like he had tried each one before settling on the smallest.

Kneeling, Ray was pushing on the dummy’s chest. His t-shirt was soaked through with sweat.

He looked up at her, but she knew he was looking through her at the memory. Dispatch sent them to a nice neighborhood with manicured yards and kids playing. A worried employer called when a female employee never showed for work. Jill found the woman’s body on the bed. A baby was never mentioned. Ray found one floating in the tub.

More than sweat glistened on his face. Standing, he turned away to pull on his uniform shirt.

Post-partum depression. A fancy word for a mother drowning her kid before suiciding herself.  It took Jill and three EMTs to pull Ray away from the baby’s blue lips.

“Next time if I try harder, Maybe I can save him.” Ray’s voice tight. “I was just practicing.”