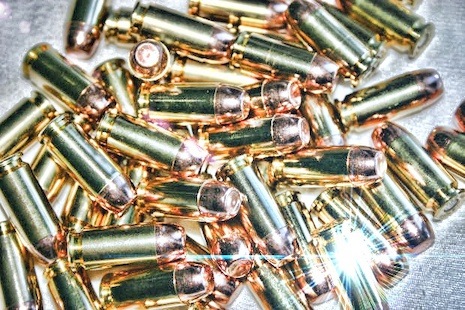 Billy Buck’s heart pert-near stopped cold when he realized he was out of bullets. He frantically dug his grubby and stubby fingers down into each of the pockets of his crud-caked moldy jeans. Nothing. No bullets. He’d have to bare-knuckle and BS his way out of this one. He straightened his back and stood tall while squinting his eyes until they were practically shut, just as he’d seen Clint Eastwood do many times. Hey, it worked for him. Maybe …

Okay, what’s wrong with the above text (other than the poor writing)? I’ve seen this faux pas in several published works, and so have you, I’m sure..

Yes, bullets are only a portion of a complete round, not the entire item. If you already knew this then you’re ahead of the game.

So, while we wait to see if Billy Buck makes it out of this post alive, let’s examine a few other details about ammunition you may not know or have forgotten.

Bullets are Only Part of the Story

Acetic acide – reagent used in in the Griess test for detection of gunpowder residue. It’s also used for determination of nitrite in drinking water.

Action – The working mechanism of a firearm. For example: Breech loading – A breech-loading weapon is a firearm (a rifle, a gun etc.) in which the bullet or shell is inserted or loaded at the rear of the barrel, or breech; the opposite of muzzle loading.

Buckshot – Lead pellets ranging in size from .20” to .36” diameter. These are typically loaded in shotshells used by hunters, target shooters, and police.

Bullet – an elongated missile of some type (lead, etc.) that’s to be fired from a firearm.

Bullet, armor piercing – A bullet consisting of a hardened core other than lead or lead alloy.

Bullet, exploding – A bullet containing some sort of explosive that’s designed to explode upon impact.

Bullet, hollow point – A bullet with a cavity in the nose that’s designed to expand on impact.

Bullet, ogive – The curved forward part of a bullet.

Bullet, tracer – A bullet featuring a burning compound in its base. The hot and clearly visible flaming trail permits the shooter, and others, to view the bullet’s flight path.

Bullet penetration – The distance a bullet travels within a target material.

Bullet splash – The fragmentation and scattering/spattering of a bullet upon impacting a surface, such as metal or wood.

Bullet wipe – The discolored area around the immediate periphery of a bullet hole. It’s the smear/staining left surrounding the hole, caused by a combination of bullet lubricant, smoke components, lead, and even jacket material.

Cannelure – A groove or other mark surrounding the outside of a bullet that’s usually knurled, although, sometimes they’re plain. Cannelures are used to assist in crimping and identification of rounds.

Cartridge – A single piece of ammunition. One round. 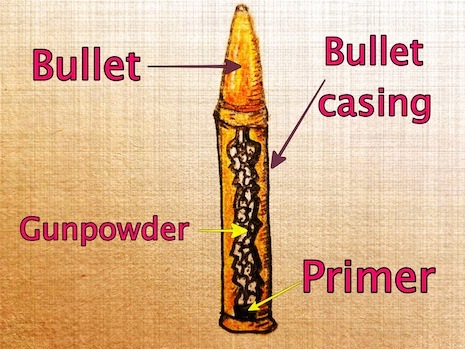 Rimfire Cartridge – A flange-headed cartridge with the priming mixture contained inside the cavity of the rim, such as .22 ammunition. 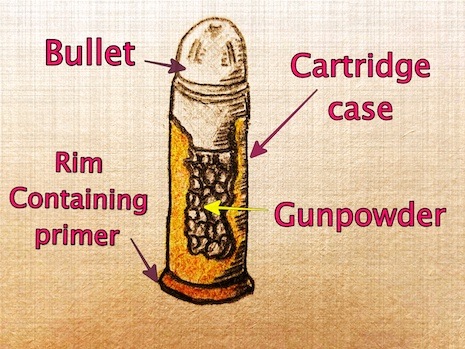 Chamber – The rear part of the barrel bore that accepts cartridges. Revolver cylinders have several chambers, for example (six shooters).

Chambering – Inserting a cartridge into the chamber. Officer Al Bundy, ready for a night of walking his downtown beat, loaded his 9mm and then chambered a round. He looked toward his partner and said, “Let’s rock.”.

Cordite – A double-base smokeless powder. It’s made of gun cotton, nitroglycerin, and mineral jelly. The mixture is molded and shaped into long cylindrical strands. Which are packed into individual casings. Cordite use and manufacturing ceased near the end of WWII. It’s not used in modern ammunition; therefore, modern day characters in novels and on TV cannot smell it when entering a crime scene. NO CORDITE in your stories!!!!

Cylinder – The rotating part of a revolver that contains the chambers (the individual slots where rounds are inserted). 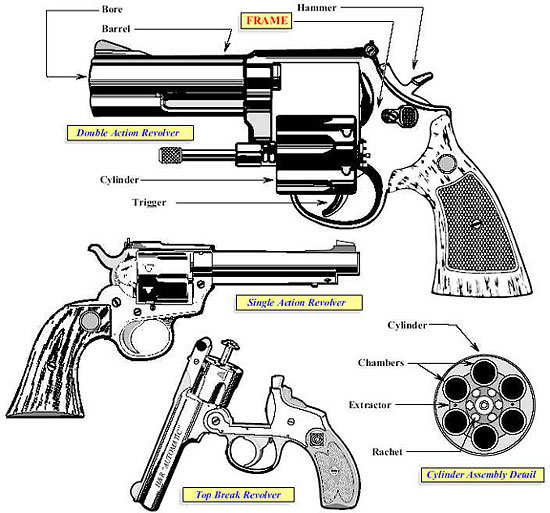 Ejection – Expel a cartridge case, live or fired round, from a firearm.

Ejector/Extractor – The mechanism that expels cartridges or cartridge cases from a firearm.

Ejector/Extractor marks – Toolmarks on a cartridge case produced from contact with the ejector. Ejector/extractor marks are typically found near the rim of the cartridge and can sometimes be used to match a spent cartridge with the firearm that made the unique scratch, dent, etc.

Feeding – The insertion of cartridges into the chamber, either by hand or by magazine.

Feet per second – The unit of measurement used to express the speed of a projectile’s rate of travel.

Firing pin drag marks – Toolmarks produced during the extraction, ejection cycle, when a firing pin contacts a cartridge case. The same occurs when ejecting shotshells from a shotgun.

Billy Buck’s partner in crime, Onion Jenkins, tossed him a handful of cartridges (not bullets) just in the nick of time. So yes, he made it out of here in one solid, non-perforated piece. 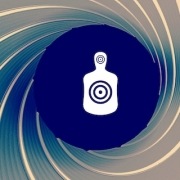 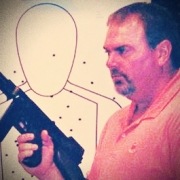