She thinks she’s funny and she’s quick to spout off a bit of corny humor. She has an unlimited supply of music at her fingertips (well, if she had fingers those tunes would be right there on the tips).

She knows almost everything, including the height of Mt. Rainier and the fact that starfish do not have brains. Now that’s hard to believe, isn’t it? That a living being that does things like eat and crawl and hide and … well, that they have no brain is an amazing piece of information. It’s equally amazing that Alexa (that’s her name) knows this stuff and can relay to us within a split second of hearing the request/question.

In addition to her unbelievable intellect and large music library, Alexa may have been the sole witness to an Arkansas murder and police want to hear what she has to say about it. But Alexa has lawyered up and isn’t talking.

Alexa, for those of you who aren’t blessed to share your homes with this tall, cylindrical beauty, is the name assigned to Amazon’s personal assistant device.

Need a reminder of the items you need to pick up from the grocery store? No problem, just tell Alexa and she’ll jot them down for you. Today’s weather forecast? Ask Alexa. Traffic on your morning commute? Alexa knows. Want to hear Tiny Tim sing Tiptoe Through the Tulips? Yep, Alexa will play it for you. A joke? A crazy fact? Play Jeopardy? How tall is Mt. Rainer? Yes, Alexa can and will do it all.

But can Alexa help Bentonville, Arkansas police with a murder investigation? Did she hear the victim’s final words? Did the killer say something that could help convict him? Did Alexa record anything at all that could help solve the case?

Actually, the name “Alexa” is the “wake word” for the Amazon Echo device. When it “hears” its name the blue light ring circling the top of the cylinder illuminates. That’s the sign that she’s ready to respond to a command.

The fact that Alexa remains ready to respond at all times of the day, nonstop, also means that she’s listening to everything and anything that goes on. And her ears (per Amazon – seven microphones and beam forming technology so it can hear you from across the room—even while music is playing) do not miss much, if anything. And that’s why police are hoping “she” can help, and they’re anxious to question her. Amazon, however, is resisting the request from police, citing privacy concerns. 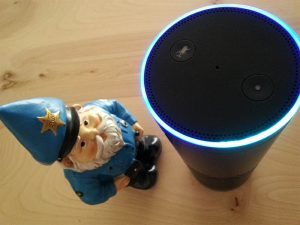 Alexa was present the night Victor Collins was found dead in a hot tub in the home of a Mr. James Andrew Bates. An autopsy proved that Collins had been strangled.

Bates claims he was asleep when the murder took place and, as a result, offered a plea of not guilty. He is out on bail. Now police are hoping that Alexis and the information she sent to the Cloud may offer clues. Court records show the Bentonville Police Department requested “electronic data in the form of audio recordings, transcribed records or other text records related to communications and transactions between An Amazon Echo  device” at Bates’ residence and Amazon.com’s services from Nov. 21 to 22.

Basically, the police are hoping Alexa may have overheard something—anything—that could help convict a killer.

I have my doubts that Alexa can help with this investigation because she doesn’t store information. Instead, the Echo (Alexa) transmits all information to the Cloud where it is transposed into text the device can understand. These requests (questions, etc.) are saved, and that’s what the police are banking on to help them. Not the actual Alexa device. Actually, I believe they’re hoping for a cumulative amount of small pieces of evidence that mound up into a large lump of incriminating circumstantial evidence—tid-bits from Alexa along with the physical evidence from the scene, and that a large amount of water was used around the time the murder occurred.

Police learned about the water usage after recovering information from the home’s smart water meter. The meter showed 140 gallons of water was used in the home from 1 to 3 a.m. that day, a much heavier amount than normally used at that time of day.

Remember, though, Alexa does not activate until she hears the “wake” word. Therefore, if the killer did not say, “Alexa,” then she would not have switched on to record anything. She does NOT record entire conversations, nor does she activate randomly. So it’s doubtful that police will find much help in Alexa’s testimony.

However, if the killer did say Alexa’s name …

Alexa: “Hmm … I’m not sure what you mean by that. Try using BING to find the answer to your question.”

Alexa: “What’s the opposite of irony? … Wrinkly.”

Killer: “Alexa, add bleach, rags, rope, and a shovel to my shopping list.”

Alexa: “I’ve added bleach, rags, rope, and a shovel to your shopping list.”

Alexa: “A starfish has no brain.”

Followon TwitterSubscribeto RSS Feed
Everything You Thought You Knew About Cops: Cordite, Perps, and … Badge...

Friday’s Heroes of 2016: Remembering the Fallen – Human and K-9
Scroll to top