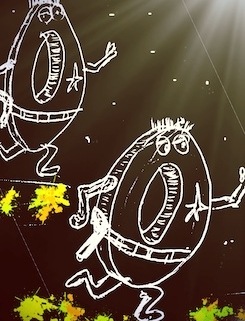 The pursuit ended when the fleeing felon crashed his car in a roadside ditch. Both he and a passenger hopped out and began running toward an open field. The passenger turned right at a stand of maple trees. The driver hooked left, aiming for the rear of an elementary school. He carried a pistol in his left hand.

The dispatcher called to the officer to report that the driver was wanted for killing two police officers in a nearby town. The pursuing officer, D.O. Nut, chased the suspect, picking up speed and gaining on the armed man. His partner ran after the passenger.

Officer D.O. Nut felt his heart pounding against the inside of his ribs, its intensity mirroring the rapid rat-tat-tatting of a Thompson Sub-Machine gun. He felt his muscles quivering and he sensed a sudden burst of energy (no way he could run this fast and this far on a typical day).

In spite of his wide open mouth that sucked air as hard as his lungs would allow, he seemed fine, as if he could keep up the pace all day long. His vision was sharper than usual and his mind processed information at lightning speeds. He was invincible.

He caught up to the the cop-killer, an extremely large, muscular man the size of a pro wrestler, and quickly took him to the ground where he aptly placed cuffs around his massive wrists and then pulled the struggling behemoth to his feet for the long walk back to the patrol car. Piece of cake.

Adrenaline is definitely bad to the bone!

The officer suddenly felt a bit dizzy due to the change in blood circulation and oxygen. The temperature was a bit cool out, yet he felt somewhat warm and was perspiring far more than normal.. It was nearly an hour later before the odd feelings subsided.

That’s how it is for a police officer, the rollercoaster ride of adrenaline rushes and crashes/dumps, over and over again throughout a typical shift. From 0-100, time and time again. Guns, knives, fists, pursuits, yelling, screaming, crying, hostages, suicides, murders … STRESS!

Adrenaline, a simple stress hormone, aka epinephrine, is produced within the adrenal gland, a small gland that’s perched on the tops of our two kidneys. But as tiny as it is, the gland is the powerhouse behind our incredible “fight or flight” responses to fear, panic, and/or perceived threats.

Adrenaline is produced by a very specific layer of tissue within the adrenal gland—the medulla (the middle tissue). The gland also synthesizes many other hormones but that’s for another day, possibly. For now, let’s maintain our focus on adrenaline and how it’s so very important to police officers, victims of violent crimes, and the everyday Joe or Jane.

An “adrenaline rush” occurs when the Sympathetic Nervous System is involuntarily activated by the brain when it detects that we’re involved in a high stress event, such as imminent physical danger.

When we’re frightened by a life-threatening situation such as an armed robber or serial-killer-maniac, the brain senses the danger and immediately sends an instant message to the adrenal glands. When the adrenal gland receives the alarm, and it’s an instantaneous reaction, it leaps into action and quickly dumps a massive surge of adrenaline into the bloodstream.

Once adrenaline is released and snakes its way throughout the body, it begins to work its magic—releasing glucose into the bloodstream to generate extra energy, speeds up our heart rates and increases the thumping power of the heart’s contractions, and it dilates the blood vessels.

To increase our intake and exchange of oxygen, adrenaline also widens the bronchioles, the smaller airways in the respiratory tract that lead to the alveolar ducts and finally to the extra-tiny alveoli (in the lungs) where gases are exchanged with blood.

Alveoli, by the way, are tiny air sacs located in the lungs at the end of the bronchioles. The alveoli are where the lungs and the bloodstream exchange carbon dioxide and oxygen.

I apologize for rambling but, since we’ve brought up the alveoli I’d like to take a brief moment to mention their part in breathalyzer testing. I know, it has absolutely nothing to do with the topic of the day but it’s cool information that could someday be needed in a work of fiction, so here you go.

As blood is pumped throughout the body it passes through the lungs where it is is oxygenated. As a result, when a person consumes alcoholic beverages some of the alcohol eventually crosses the air sacs (alveoli). When it reaches those sacs alcohol is released into the air. This occurs because because alcohol evaporates from a solution because oxygen is volatile.

The ratio of breath alcohol to blood alcohol is 2,100:1, meaning that 2,100 milliliters (ml) of alveolar air contains the same amount of alcohol as 1 ml of blood.

Whew! That Was Confusing, Right? And I had to endure a week of classroom training about this stuff back during Breathalyzer certification training. Fun times!

Okay, Now Back to Adrenaline

We’ve all experienced an adrenaline rush at some point during our lives. Like when the car nearly crashed into you on the freeway, or during your PIT maneuver training at the Writers’ Police Academy as your car was struck by one driven by Tami Hoag or Craig Johnson, a controlled collision that caused your vehicle to wildly spin out of control.

Now, with our bloodstream loaded with adrenaline, we’re ready to either stand and fight or put our feet in action to make a speedy retreat. Fortunately, we don’t have to develop this plan before we act because our autonomic nervous system does it for us. It’s this automated control center of our nervous systems the start the process for us. All we need to do react in whichever method—to run away or stand and fight—our bodies tell us.

If we’re forced to fight during the time when adrenaline is surging through our blood vessels, well, Mr. Bad Guy had better prepare for a wild ride because fear can bring out the grizzly bear in each of us. It is this physical response that can aid in fending off those who mean to do us harm.

Adrenaline is indeed a remarkable thing. Once it’s sent on its way through the bloodstream, it can turn the meek and mild into supercharged versions of themselves.

The Tractor and a Child’s Superhuman Strength

An uncle of mine lost his legs after a farming accident when a tractor he was driving slipped on a hillside and overturned, pinning him beneath it. His young son, just a small boy, witnessed the accident and miraculously lifted the tractor from his father who then managed to pull himself away. The boy then released his hold on the tractor and it fell to the ground. Unfortunately, both of my uncles legs were crushed and had to be removed.

He went on to live a productive and active life, though, and never let his handicap slow him in any way. He even enjoyed joining in a game of softball once in a while. He was a killer with  bat and could easily slam a ball into deep center field. Then he’d “run” the bases by using his hands to thrust his torso forward and back much like the movements of a chimpanzee scampering along the ground. My goodness, my uncle was fast, too. He’s gone now, but his story and love of life and family left a lasting impression on many people.

But, my uncle would have succumbed to his injuries had it not been for his son’s quick thinking and and adrenaline-charged super strength. And it is that same “rush” that helps cops survive each and every day.

But those ups and downs can take a toll on the body. 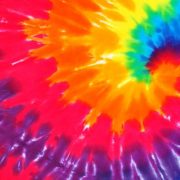 An Officer’s Perception: Sound Before Sight, Motion Before Color, and Color Before Shape