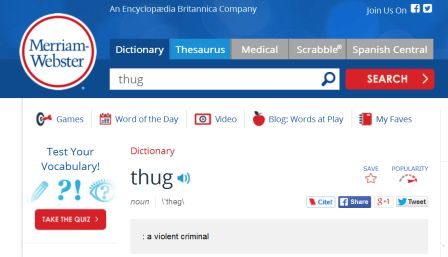 There has been quite a bit of discussion lately regarding the term “thug.” Well, to many of us there is only one actual definition of the word, and it’s the one offered by Merriam-Webster and other similar sources.

:  a brutal ruffian or assassin

That’s it. Nothing more and nothing less. A violent criminal. A brutal ruffian or assassin.

I’ve used the word in my writings, and I’ve used it when referring to a specific person or group of people—violent criminals, such as mobsters, murderers, rapists, robbers, gang members, people who assault others, etc.

To me, the term is racially generic. It’s a “one-word-fits-all” term that encompasses ALL violent criminals without regard to a specific tone or hue of flesh. You see, it’s not a person’s skin color that makes them a thug, or not. Not at all. It’s what’s inside that counts. If you’re a violent person, then you, my friend, are a T.H.U.G. thug.

The definition above is a one line description. There are absolutely no extra or hidden lines to read between. Anything added is just that, something someone added because they “thought” something was there.

Recently, TV superstar executive Byron Allen expressed his disappointment over President Obama choosing to use the term “thugs” when referring to the violent Baltimore rioters. Byron basically equated the word “thug” with the n-word. Well, I’m not exactly a fan of many of President Obama’s policies, but in this case I agree with him. He merely used a proper term to describe a group violent criminals, a mob that included African Americans. But he could have just as easily been describing the motorcycle club thugs involved in the recent massive fight/shootout. Or the Boston bombers, the kid who punched and knocked out an elderly man so he could rob him of a single $1 bill, the cop who beats or kills an innocent citizen, and, well, you get the idea. A thug is a thug is a thug.

I know some people won’t agree that thug is a generic term. How the word evolved into something it’s not is beyond me and is something I simply don’t understand, but I do wish people would stop trying to force words and hidden meanings into my mouth.

So from this moment forward, as always, if you hear me use the word thug or see it in something I’ve written, you can automatically know that I’m referring to a violent criminal. But you may NOT assume I’m speaking of a specific race.

Here’s something for you to ponder. When I speak or write of a wonderful person I know but you don’t, do your thoughts automatically picture someone of a certain race? No? Then why do certain images appear in your mind when I use the term “thug?” I guess what I’m asking is that you please not blame me for your own private thoughts, or to use my words to bring those thoughts to life.

Followon TwitterSubscribeto RSS Feed
Rifles and Shotguns: Do You Know The Difference?