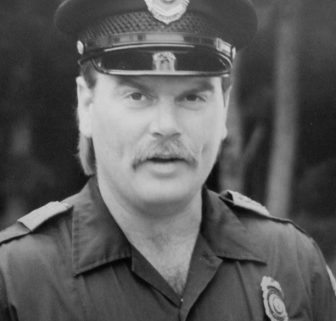 It happens. You’re a detective who’s minding his own business and growing his hair out along with a scruffy beard in preparation for working an undercover assignment, when the boss calls to tell you to suit up for a special assignment. He needs warm bodies in uniform…as many as he can get, and fast.

So you (in this case, me) rush home and pull out the old Class A. It fits, barely. And I mean butt-seam-expanding barely. After all, it’s been years since I’d had it on. In fact, it had been so long ago that styes had changed and my fellow officers were currently wearing a different uniform entirely.

Next came the razor. The beard, after weeks of perfecting it to a drug-user-bad-guy appearance, had to go. But I had a moment of absolute “brilliance,” and decided to leave a sporty push-broom/porn-star mustache. Why? Who knows. Oh well, we do odd things when the pressure is on, right?

When I arrived back at my office, the chief took one look and said, “Your hair is too long. Get it off your ears. Can’t see them and I won’t have you looking like that in the morning papers, and they will be covering this one. And straighten those ribbons while you’re at it.”

There was no need to argue and no time for a haircut. So I, being such a creative genius already, did the next best thing—pushed my hair behind my ears and plopped one of those goofy cop/bus driver hats firmly onto my head to keep everything in place. All the while hoping I wouldn’t get into a scuffle where a bad guy knocks the hat from my head at the precise moment a reporter/photographer snaps a picture. That’s right, I was more worried about the hair-too-long news photo than a punch to the skull.

So…how well do you think I blended in with the rest of the guys—wacky mustache, razor burns on the cheek and neck (a few dots of dried blood as well), hair pushed back behind my ears forming what appeared to be a mullet of some sort, a bus driver hat that no one wore, and I mean no one, pants splitting at the seams across the rear end, and, well, you get the picture. I was NOT the prime candidate for a recruiting poster.

By the way, you’ll notice in the photo above that I wasn’t wearing a vest, and that’s because in my haste to get back to the PD I forgot to grab it from the closet before getting dressed. Actually, I was extremely lucky my shoes and socks matched, assuming they did.