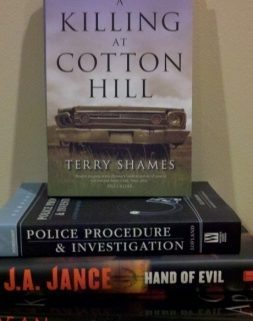 In the flavor of J.A. Jance, mingled with a pinch of seasoning similar to the styles of other top shelf authors, Terry Shames offers readers a wonderfully-told tale that kept me turning pages until I reached the last. Sure, the book features a clever mystery, and the characters were so realistic they seemed to crawl off the pages to sit beside me, whispering their dialog into my ear. But what kept my interest more than anything was the writing. It was absolutely superb.

A Killing At Cotton Hill ( Prometheus Books/Seventh Street Books, trade paperback, July 2013) is the story of Samuel Craddock, a former Jarrett Creek, Texas police chief. Craddock’s reign as the area’s top cop ended long ago, but he’s still ten times the lawman as the new chief, good ‘ol boy Rodell Skinner. And when Craddock’s neighbor winds up dead, well, let’s just say that widower Craddock takes it upon himself to see that justice is served, and he does a fine job of winding his way through a well-crafted mystery.

Craddock’s journey to the end of the book takes us through Texas farmland, shady real estate dealings, and into dimly lit roadside bars. And, for an interesting twist, into the world of fine art.

Readers are introduced to a lovely set of characters who keep the story moving along at a brisk pace, with absolutely no boring filler and unnecessary prose. Each word in the book has purpose.

Now for the other side of the coin. The author takes a few liberties with law enforcement procedures, but hey, it’s a work of fiction. I notice the little things related to cops and criminal investigations because that’s my thing. The majority of the general public, though, would not give a flying flip if a police chief was dropped to earth from an alien spacecraft, as long as her abrupt arrival fit the storyline.

Speaking of “her” arrival…author Terry Shames tackles her first book from the perspective of a male protagonist. Normally, I can tell when one gender writes as the other, but not with seasoned authors like J.A. Jance who, by the way, is one of the best in the business, if not the best. Shames can now join the very small group of authors who’ve fooled me, and that’s a good thing.

I thoroughly enjoyed reading this book. I did think, however, that the ending came a bit too quickly. In fact, the final few pages seemed a little hurried. But it wasn’t enough to matter. Not at all. Actually, there was a surprise twist at the end that tied up everything in a neat little bow.

I believe today is release day for A Killing At Cotton Hill, so, if you’re looking for an addition to your TBR pile, this one will fit in nicely. Be sure, though, to clear your calendar before opening the book, because there’s a good chance that you’ll not want to put it down until you’ve devoured every single word.

Aging Behind Bars:The Rise Of The Elderly Prison Population
Scroll to top