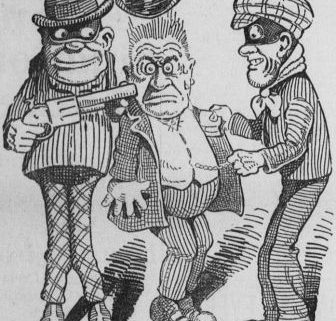 Cordite, Ca. – The home of I. Will Fillemfullalead on Glock Circle in Cordite was robbed last night between the hours of 8 p.m. and 11 p.m. while the family was away enjoying a movie at a local theater. Robbers gained entry by kicking in the kitchen door and then took nearly everything from the home, including a goldfish named Pegleg, leaving the Fillemfullaleads with very little. The Red Cross has offered their assistance—blankets, water, food, and a loaner fish until they’re able to get a new one.

“When we got home, we saw that our house had been robbed. They took everything, right down to the kids’ handguns and reloading kits,” said Mrs. Fillemfullalead. “I hope the police catch them before we do, or there’ll never be a trial.”

Okay, how many times have you seen headlines similar to the ones above? Too many times if you ask me, because a house cannot be robbed. No way, no how. The definition of a robbery is this – To take something (property) from a person by force, violence, or threat.

You cannot threaten a house or business. Nope, there has to be a human person present to constitute a robbery. And he/she must have felt threatened and/or intimidated by the robber when the goods were taken. Otherwise, a home or business has been burglarized (NOT robbed), and their property stolen (NOT robbed).

Therefore, the Fillemfullalead’s home was burglarized and their belongings stolen by the burglars.

Burglary – To break and enter a building illegally with the intention of committing a crime, such as stealing the things inside.

Please, keep this in mind when writing your stories.