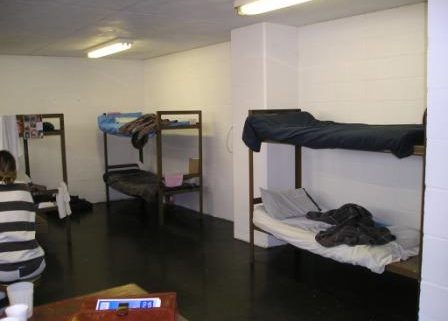 A traffic crash had me sitting still for thirty minutes, or so, which was just long enough to make my getting to work on time a bit on the iffy side. So iffy, in fact, that when I finally did arrive at the “institution,” I slammed the shift into park, grabbed my lunch box, and made it inside for role call just in the nick of time. But only after jogging across the parking lot playing “dodge and weave” through the rows of parked vehicles. Another two minutes and the captain would’ve written me up. The first step to guaranteed time off without pay. A crappy start to a crappy night.

The 4 p.m. count was off. I counted 220 inmates and the outgoing officer counted 219. On the second walk-through I got 219 and her total was 220. On the third attempt we both counted 219. The trouble there was that the actual total in our building should’ve been 221. We got it right on the fourth pass. I was still sweating from my sprint across the lot, and my heart was doing double duty inside my chest.

My duty assignment for the shift was as “Floater,” meaning I had no specific designated area, such as working the SHU (Specialized Housing Unit) or as an officer posted at the gate or in a tower. My responsibility was to walk, look, and assist where needed. But my first order of business was, well, I got stuck with being posted standing outside the chow hall to monitor “the line.” 800 inmates, all waiting for the doors to open so they could get their once-per-month piece of real meat—bone-in chicken.

It’s like a freakin’ holiday in that place on “chicken day.” Actually, I didn’t blame the prisoners for their exuberance since the rest of their meals consisted of things that were not easily identifiable.

Believe it or not, my job was to stand there like an elementary school safety patrol clutz, preventing grown-ass men from cutting line. Of course, there were fights. Some tatted-up white guy cut in front of the black guys. A black guy cut in front of the Nazi Lowriders. And the Mexican Mafia was putting up with none of it. Then all hell broke loose. And it was me, little old me, against them until reinforcements arrived.

Finally, after the dust settled and ten prisoners were carted off to the hole (SHU), the evening meal passed without further trouble, and the chicken actually looked pretty good. No way I’d have tasted it, though. Couldn’t pay me to eat food cooked by inmates.

I spent the next four hours out on the yard where the inmates segregate themselves by race and ethnicity—black guys by the basketball courts, the Native Americans dominated the handball courts, white guys occupy the area by the softball field, Hispanics own the soccer field, and the Italians settled at the bocci area. Jewish inmates also segregated themselves. And, each group has their own little cliques inside each of their areas.

Some of the white guys sit to themselves to play guitars. A few of the black guys hang out by the picnic tables testing their latest rap songs on their buddies. And, well, you get the idea. But the one thing that’s clear is that there is generally no mixing of the ethnic groups. The only real exception to the no-mixing rule is with the gay guys. They hang out with anybody who’ll have them and no one cares.

There are inmate “guards” who stand watch over each group and it’s their duty to let their people know if or when trouble approaches, including a visit from from staff. Looking in from the outside you’d think the inmates are doing nothing more enjoying a bit of fun time. The reality is that many of them of are scheming and plotting all sorts of things. I made a point to waltz through each area as often as I could to let them know that I knew what’s up. Besides, there’s some real talent in those places, so listening to their music is sometimes like attending a real concert on the outside. They’re that good.

Only one stabbing out there on the yard on this particular shift, and that happened when the 9 p.m. buzzer sounded to announce the yard was closing. Too many people in a group to see who stuck the guy so there were no charges and no one went to the hole for it. Investigators would review the videos later.

After everyone was back inside and the doors were locked, it was time to count them again. 221 on the first pass and, by the way, that’s 221 inmates locked inside an open dormitory with only two officers to watch over them.

TV rooms within the housing units are also self-segregated in the same manner as the rec yard and chow hall—Hispanics in one room, whites and blacks each to themselves. Each inmate has to bring his own chair from his cubicle if he wants to sit. The big TVs in the common area rooms are for watching sports and movies, or whatever the majority wants to see. Of course that, too, is dominated by whichever ethnic group has the most people in the room at the time.

There’s a room at the front of the dorm where inmates do their own cooking, using one of the half-dozen microwaves that’re perched on a long shelf attached to a wall. The opposite wall is home to community washers and dryers. The meals these guys prepare using minimal tools and ingredients are pretty amazing. And the desserts…all I can say is…incredible.

Inmates purchase their recipe ingredients from the commissary—items such as bell peppers, onions, tomatoes, sardines, potted meat, tuna, cakes, cookies, etc. And, course, they utilize whatever they can steal from the dining hall. Kitchen workers “take” things and sell them to the others.

Inmate “chefs” somehow turn those ragtag ingredients into dishes that would make any Chopped contestant extremely envious. When the meals are ready the cooks share with their close friends, or they deliver the steaming hot food to other inmates who’d paid to have the meals prepared for them. The Italian “bosses” really seem to fare pretty well in this regard, having their meals catered, shoes shined, clothing washed and pressed, hair trimmed, etc.

At night the place is extremely loud with chatter and laughter, card playing, TVs blaring, and such, but when the buzzer sounds for lights out it all comes to a halt. A pin dropped onto the gleaming concrete floor would resound like the 13-ton bell of Big Ben.

The time between 10 p.m. lights-out and midnight shift change is typically a quiet time. Most inmates get up early to go to work, so they do little more than immediately go to sleep. Some, however, read (they’re allowed to have book lights) or think of loved ones while listening to Delilah playing sad songs and telling sappy, sad stories on their radios (ear buds or headphones must be used at all times). However, it’s around 2 a.m. when things become a bit challenging, even for the most experienced officers, because that’s often a time when the pants come down and the bending over begins—willingly, or not.

The first time I rounded a corner and saw two men, one bent over and backed up to the front of another, well, I didn’t know what to say. I’d only been a corrections officer about two weeks at the time and, honestly, the sight totally embarrassed me. It was dark, and I was using my flashlight to illuminate the cubicles and their occupants, and when my light hit those two guys they immediately stopped what they were doing, but didn’t separate, and gave me that “deer in the headlights” look. 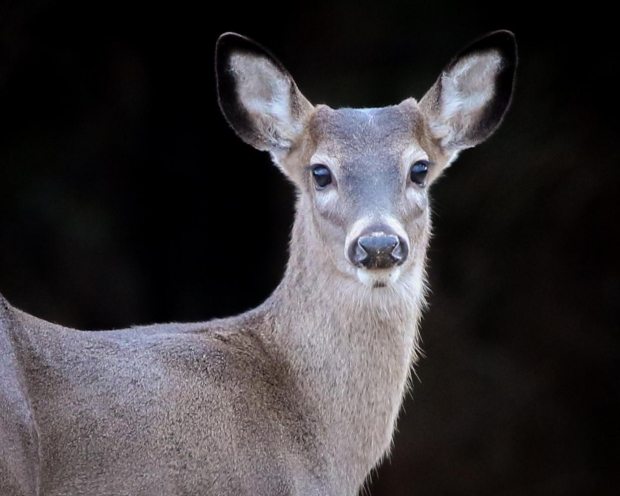 Not the actual inmate. No deer were harmed during the writing of this article. Embarrassed, maybe, but not harmed.

I’m sure the expression on my face was quite similar. Thankfully, they couldn’t see me (but I’d certainly seen far too much of them). All I could think to do was snap off the light, and did. When I switched it back on a second later they were “apart.” I never mentioned it to anyone and neither did they.

So my shift was nearly over and it was almost time to drive home. I was sleepy and tired and was looking forward to crawling between the sheets for some well-earned shut-eye. In addition to my shift at the prison, I’d worked all day at my second job, digging, planting, pruning shrubs, and mowing lawns.

However, just as I was exchanging keys with the oncoming building officer, my sergeant stopped by to tell me that I’d been drafted to work the midnight shift. Seems that someone on the next shift had called in sick and my name was next on the list for the draft. To make matters worse, I’d been assigned to tower duty for the next eight hours. Mind-numbing tower duty, where you sit in a small box on stilts and stare out at absolutely nothing for an entire shift. Radios and cell phones aren’t allowed, so keeping the old eyelids open is always a chore.

But it’s a job. A job that, at best, is not great. But, where else could you go to have crap and urine thrown in your face every day of your life? Ah, you gotta love what you do, right?

Followon TwitterSubscribeto RSS Feed
Aikido (The Art of Peace): Using an Attacker’s Own Force Against Him