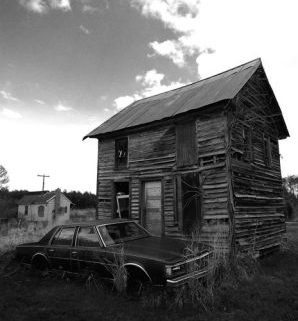 The Golden Donut Short Story Contest is a real test for writers. Not only do the authors have to write a complete story about the photo we post, they must tell their story in exactly 200 words, including the title. We received a mountain of stories this year, and I understand that all were superb, which made judging extremely difficult.

Still, a top tale had to be chosen. So, it gives me great pleasure to announce the winner of the 2012 Golden Donut Award….Ann Kellett, for her story, “Closure.”

“Frankly, we were surprised at how low your bid was,” the woman said.

“Tearing down this old place will be our easiest job all month,” the man said. “And it’s the neighborly thing to do, after all you’ve been through.”

“We’ll be back tomorrow to haul off the debris and car.”

“She got that the day she turned 16,” she said. “Would’ve been 18 last Wednesday. Cops say there’s always hope, but not much since she’s been missing for a year.”

The woman sighed and blinked several times. “Should’ve done this years ago. It’s a real eyesore.” She managed half a smile. “At least your property values will go up.”

The man smiled back. “Guess I’ll get to work. Good luck to you both. The neighborhood won’t be the same without you.” They shook hands.

The man counted to fifty before entering the shack and unlatching the door to the thick walled crawlspace. The young woman, bound and gagged, looked up with dead eyes and shifted slightly on the sleeping bag.

He got the knife. “This shouldn’t take long. Closure, you know.”

“Come out and get what’s coming to ya! I know you’re there!”

Nothing stirred in the old ramshackle cabin. Even the fat crow devouring a large beetle a few steps away ignored me. I considered throwing something at it, but I wanted to conserve strength, and I didn’t want to let the pistol out of my grip. The bullet wound didn’t hurt anymore.  Propped up against a fence post, I stared at the cabin waiting for their ugly faces to appear.

“Take this, suckers!” I yelled and tried to lift the pistol.  My arm didn’t respond.

Grisler, the fatter of the two, stared at me and spit.

“Leave him there?” Johnny asked.

They gunned the dark sedan and left in a whirlwind of dust and flying pebbles.

Maybe the cabin had a phone, but before I could get up, I heard an approaching car. Did they forget something?  No, a police car appeared.

They looked at me and then each other. I kept my mouth shut.

“Been dead for at least a day,” the older one said.

It wasn’t supposed to end like this. Not as a rundown, sagging eyesore.

I was a home. Mary planted flowers to brighten my yard. My windows were whole, and clean, letting in the sunshine. Children played here, laughing, running up and down the stairs, into the yard and back. My floors were traipsed and worn with love.

Love and laughter filled my walls.

That was before he came.

The laughter was the first to leave. He called it noise, and stopped it.

There was still love, for a while. Quiet love, but love nonetheless. When he was gone, Mary encouraged the children to laugh, and sing. But when he came home, when the lights from his metal carriage swept across my walls, it stopped.

Love died away too. Because truly, how can love survive where happiness has disappeared?

My walls still stood, solid and proud, but sorrow filled the space within.

The pain came next. Pain for Mary, and the children. Tears stained my floors, and scrubbing could not erase the blemishes.

It all stopped one night, after angry words, broken hearts and a shattered banister.  Rivulets of red, sticky and warm, covered my white walls.

The old man teetered as he walked through the tall grass and, approaching the ramshackle old cottage, spoke to his old partner.

“This one always bothered me, George.  That sweet little girl, covered in blood.  Since I retired, it still haunts me.”

“I don’t know why you brought me back to Morgan’s old shack.  We know he did it, but we couldn’t prove it.  We never could find that one piece of evidence to link him.   I wish we had.  I saw him three weeks ago. The bastard smiled at me.”

“Why’d you bring me here, George?”

He felt George’s hand on his shoulder, urging him toward the old space heater.  “What?  I thought you looked in there.”

The old detective reached in and felt the handle.

His hand trembled as he withdrew the blood stained knife; partly from age, partly from twenty years of wondering.

“My God.  We can take this in.  With DNA nowadays, maybe we’ll finally know.  That sweet little girl,” he whispered as the tears began.

He turned and looked into the empty room.

“Thanks, George.  Ten years you been dead, but you’re still showing me the way.”

Turn of the Key

Both the car and the battered shack behind it looked murky through the scope of my rifle.  The squeal of brakes, followed by opening car doors and heavy footsteps, shattered my trance.

“FBI!”, the swarming agents screamed with commands I had used back when I carried the badge, “drop the weapon!”

Before I knew it, there were hands on me and I was staring Ned, my old supervisor, in his forlorn face.

“Ned, you don’t understand; I’ve finally got him!  He’s in that house!”

“Sarah, you’ve been running for three years.  It’s time for you to get some help.”

“He murdered my children!  I’ve been chasing that car-”

He shook his head sadly.

“Sarah…that’s your car.  You’ve been driving it around this country shooting people ever since you lost your family.”

It couldn’t be; the person driving that car had killed my kids.

I snorted in derision.  Damn bureau, always thinking it was omnipresent.

“I’ll show you”, he said, walking to the vehicle.

I’d been tracking that car for years…

I heard the ignition start –

And began to cry.

The judge for the Golden Donut contest is Kristen Weber. 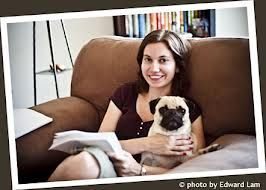 Kristen most recently worked as a senior editor for Penguin’s New American Library (NAL), where she helped launch Obsidian, their dedicated mystery imprint. Besides running the day-to-day operations of Obsidian, Kristen edited approximately 30 original titles per year. She was also in charge of NAL’s movie/television tie-in program and edited numerous original novels based on TV programs such as Burn Notice, The Unit, Criminal Minds, and Psych.

Kristen now works as a freelance editor, helping authors prepare their books for the marketplace.