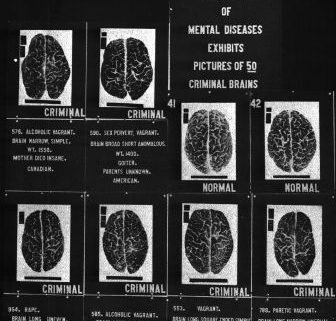 Whenever a crime happens, the community is left wondering how someone could do such a thing. For most of us, it’s hard to comprehend the urge to harm someone else or steal something, especially when we consider the consequences to the victim, their family, and ourselves. But many criminal brains work differently than the average human’s. Of course, there are people who turn to crime after a tough childhood, but some criminals, especially psychopaths and those with personality disorders, have minds that are wired for crime. Here are 10 unbelievable facts about the criminal brain.

1. Parts of the brain are deformed

All the parts of your brain work together to make you a complete, functioning human being. But for many criminals, some of these parts aren’t the same size as they are in the average person, causing them to act differently than the rest of us. Studies have found that two parts of the brain’s frontal lobe are significantly smaller in people with antisocial personality disorder, who have the tendency to act violently and become repeat offenders. One of those parts was 18% smaller in antisocial people compared to normal people; the other was 9% smaller. The frontal lobe controls our decision making, emotions, and purposeful behaviors, so criminals may have less authority over these functions. A study of psychopaths also found that a portion of the amygdala, a piece of the brain important for human emotion, had a volume of about 18% less than what you would find in a normal person.

2. A tumor could be to blame

While the large majority of criminals don’t have a brain tumor, some criminals have been found to have a cancer that probably contributed to their unthinkable acts. One of the most notable of these is Charles Whitman, who killed 16 people at the University of Texas in 1966 before being killed by police. He had been experiencing terrible headaches and wrote that he was having many irrational thoughts. In the suicide note he wrote before killing his wife and mother and then going on a rampage, he asked that an autopsy be performed on him to see if there was something in his brain causing him to act this way. And there was. Doctors found a glioblastoma tumor that could reasonably have affected his actions.

3. Chemical levels in the brain are off

Neurotransmitters are chemicals in our brains that deliver signals and cause reactions in us, such as arousal or triggering memory. Research has found that some criminal brains have different levels of neurotransmitters like serotonin or dopamine than normal brains. Serotonin at the proper levels keeps people from acting aggressively when they are frustrated, so when someone’s brain has lower amounts of the chemical, the person may react impulsively and violently. Dopamine levels affect whether a person feels rewarded for an action. If dopamine levels increase significantly when someone acts aggressively, he’ll feel good about it and likely do it again.

Psychopaths, especially those who commit violent crimes, may not have brains that register fearful expressions on others’ faces. In experiments, researchers have found that people with antisocial personality disorder have trouble recognizing faces showing fear and sadness. Antisocial people who fall into the category of psychopath find it significantly more difficult to know when an expression is sad. Psychopaths also have almost no reaction to expressions of fear, while normal people’s brains will become very active when they see a scared expression. This difference may be what keeps psychopaths from feeling remorse since they don’t register that they are causing pain or sadness.

The brain of a psychopath doesn’t react with fear as frequently as ours do. In tests of criminal psychopaths, researchers have found that they lack the fear conditioning that causes the rest of us to be afraid when we know something bad is coming. The average person can be conditioned, much like Pavlov’s dog, to expect a certain thing when they hear a certain sound. In the case of fear conditioning, many researchers play a certain tune before administering an electric shock. As the brain starts to associate the tune with the shock, the normal response to the tune is anxiety. Psychopaths’ brains, however, don’t show any change when the song plays. This lack of anxiety over the future and the consequences of their actions can make psychopaths very dangerous criminals.

6. There are warning signs as early as age three

When researchers tested the reactions of a large group of three-year-olds to certain sounds, they expected them to have a measurable reaction when they knew an unpleasant noise was coming up. About 8% of the children didn’t have any reaction even to the bad or frightening sounds. Twenty years after the experiment, researchers found that this 8% had criminal records for crimes ranging in severity from violent to serious driving infractions. This doesn’t mean that all children whose brains don’t register fear the same as others will be criminals, but it does indicate that they are more likely to act criminally and steps should be taken to raise them in a way that helps them stay out of trouble.

The corpus callosum is the bridge in the brain that connects the rational left side with the irrational right side. In criminal psychopaths, this bundle of fibers is longer and thinner than in the average person. It also seems to have more activity, meaning more communication between the two hemispheres, than normal. This seems like it could be a good thing, but while a socially normal person’s mind is controlled by the rational side, the increased communication causes psychopaths to be divided between the rational and irrational. This often leads to more impulsive behavior since they have difficulty thinking through the consequences of their actions in a wholly rational way.

Nature versus nurture has always been a huge debate among criminologists, but there is research to support the idea that many criminal brains are genetically prone to aggressive or illegal behavior. Some criminals are a product of their environments, coming from abusive homes or bad neighborhoods, but a large number of murderers were raised in relatively conflict-free households. The deficits in their brains were a trait they were born with and gave them a higher likelihood of becoming violent criminals. That’s not to say they were forced to commit these crimes, but their brains were more inclined to them than the brains of average humans. It also explains why criminals from loving, wealthy upbringings can commit horrible, violent crimes.

Though many teenagers can be tried as adults in the majority of the U.S., their brains aren’t fully developed yet. Reasoning and judgment are now known to mature throughout the teen years and into a person’s 20s. When compared to adults, teenagers are more impulsive, more susceptible to peer pressure, less likely to look at the long-term consequences of their actions, and less able to think of ways out of bad situations. Aggression also peaks in the teenage years, which means that a violent teen may not be a violent adult; they can actually grow out of it. This is one argument many critics use to prove that the death penalty should never be used for teenagers, since it is likely that their brains will develop further.

10. Smoking while pregnant can lead to children with criminal tendencies

When a mother smokes while pregnant, she may be harming her baby’s brain in a way that will make him more likely to become a criminal. Research has shown that the average adult (meaning those who didn’t come from moms with mental illness or experience deprivation) is 31% more likely to have been arrested at some point if their mother smoked while pregnant. Those with heavy smoker moms were also more likely to be repeat offenders. It seems that the nicotine causes abnormalities in the development of attention and impulse control in the brain. The finding held up for both men and women with mothers who smoked, making it just another reason to add to your list of why smoking is bad for you.

*Today’s article is courtesy of the good folks at http://www.criminaljusticedegreesguide.com/ 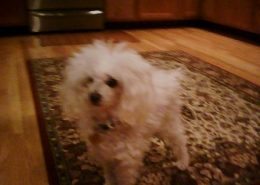 Thank you all for the kind words yesterday. There were so many wonderful messages coming from all over that there was no way I could begin to answer them all. So I decided to do it here. Forgive me for not sending a personal message to each of you.

This was my first morning in the house, alone, without Pebbles around. So odd, and so empty.