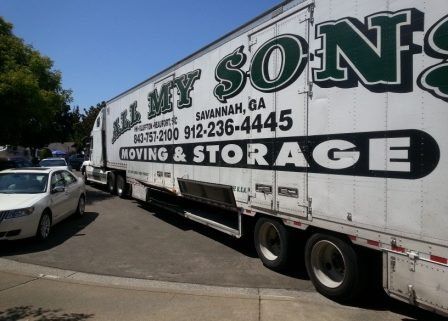 It began back in March, this ordeal called “moving.” I had several representatives come to our home to estimate the cost of packing, loading, and transporting our precious belongings from one side of the country to the other. Now, we’re certainly not strangers to the process, having seven long distance moves under our belts. We know the ropes, inside and out.

So, after reps from each of the top moving companies offered their prices, I selected a company called ALL My Sons Moving and Storage. The salesperson ticked all the boxes. He was helpful, courteous, friendly, thrifty, clean, and…oops, wrong organization. Anyway, my selection was made and a week or so later a crew of packers showed up to start the process of wrapping and placing things in boxes. A different crew came to load our belongings in a truck. This, as I said earlier, was in March.

It took five men nearly 14 hours to load our things onto their truck. Their frustration at the weight of our property was evident by the way they began to list items on the company’s official inventory document. I thought you might appreciate this one particular listing regarding one of my heavy toolboxes. This came after loading all of our gym and weight equipment. Very professional, don’t you think? A sense of humor is a good thing, right? 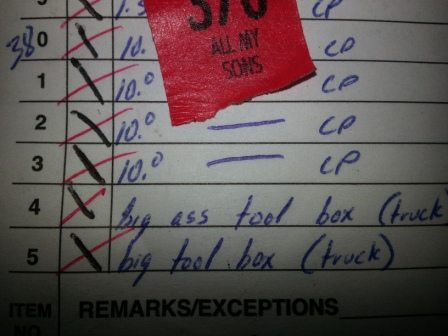 Our things were placed in the All My Sons handy-dandy climate-controlled storage facility until we called for them to be delivered to our new home. The salesperson told me when I called for the delivery, they’d have the load delivered on its way to us within a two-week window.

Well, I called well in advance, allowing for “the unexpected things to happen that always do, “and requested a delivery date. The operations manager for the company, and I, agreed on the day of June 27 as our “set in stone” delivery date. We selected the date because it was exactly one week after we closed on the new house, thinking seven days was ample time to spruce up the new place, with the help of contractors, of course.

The week of June 27 rolled around and I called the manager to be sure all was still on schedule. It was not. Then came the first excuse, and they needed an additional week to take care of  “the problem”. No worries, I told him, the delay gave me an extra week to maybe mop on a fresh coat of paint in a couple of the upstairs bedrooms.

Well two newly painted bedrooms, new trim, and some re-wiring later, I call again. “Your furniture is on the truck and will be heading your way in a couple of days,” he says. After four days, the boss tells me of a new hurdle they can’t seem to overcome—the driver refused to submit to a required urine test. Okay, I think, that’s a pretty good reason, and I certainly didn’t want a high-flying truck driver barreling through the Rocky Mountains with my music equipment and furniture rocking and rolling around in the trailer. We agreed on a new date, a week later.

Well, next came trailer problems and other new issues. And these calls eventually turned into near shouting matches. Our furniture was being held hostage and I was nearly 3,000 miles away from someone I couldn’t “reach out and touch,” personally.

Still more excuses flowed from the tiny speaker in my cellphone. I. Was. ANGRY!!

We’d lived in a hotel room from March until June, and then we moved into our brand new and very empty house and I’d grown weary of sitting on a camping chair and working from the top of a cardboard box.

Finally, I heard some good news—our furniture had been loaded onto the truck and the load was scheduled to leave the next day. The excuse-making manager said the driver would touch base each night to let us know his progress. Delivery day, he promised, would be the following Monday.

Two days went by and I’d not heard a peep from the truck driver. So I called my “buddy,” the manager. “He’ll be there on Monday,” he said.

When Friday came and I still hadn’t heard from the driver, I called again (more on this later). “Wednesday, at the latest,” Liar-Liar Pants On Fire, said.

Thursday morning started off a bit rocky, combined with the discovery of several damaged pieces of furniture, but finally wound up on a somewhat pleasant note. The driver and his partner were very professional. The partner, whom I nick-named “Wild Turkey” is one of those people in this world who has a sense of humor similar to my own. He’s also a big fan of mysteries, and some of you are “Turkey’s” favorite authors.

Note – Wild Turkey was one of the workers who packed our things, and I’d assigned the nickname for reasons I won’t disclose. I will say, however, the name has absolutely nothing to do with a bird. 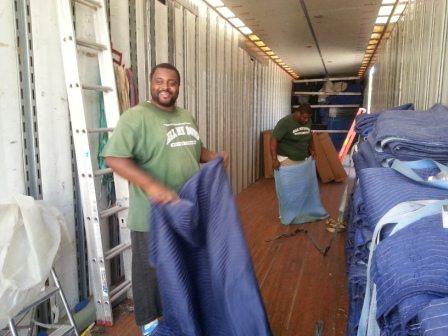 “Wild Turkey,” and the truck driver.

The truck driver hired five local movers to help unload the tractor-trailer containing our goods, and they truly needed the help—over 17,000 pounds is a lot of stuff for two men to unload (that’s what their manager wanted them to do). Denene and I also pitched in to help with the costs, above what we’d already paid the company) and it was worth the money—not a scratch on the walls or on our newly installed hardwood flooring, and the entire truck was unloaded in five hours.

I felt bad for the crew because yesterday was one of the hottest days we’ve seen in a while. 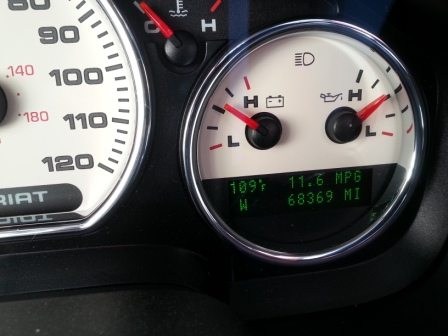 But, as soon as the last box was unloaded a few of them dove into the pool, fully clothed.

Our house is now full of boxes, and it’s in total disarray. Chaos might be a better term, actually. But our things are here and we’re extremely happy to have them with us once again.

However, even with all our belongings around me, I’m writing this from the top of a cardboard box. Maybe tomorrow I’ll see the top of my desk and will perhaps locate my office chair. I’m sure they’re here somewhere…