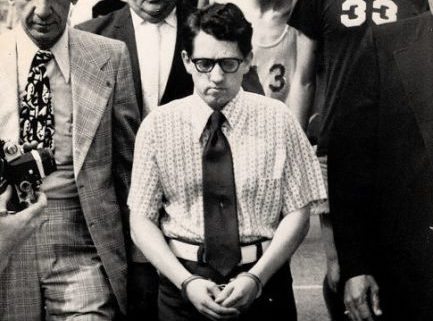 It was a beautiful day—Easter Sunday—and the family had just concluded their annual Easter egg hunt on the front lawn of Charity Ruppert’s home on Minor Ave. Charity was mother, grandmother, and mother-in-law to the entire clan.

James Ruppert, Charity’s 41-year-old unemployed son, didn’t join the others in the festivities. Instead, he remained in his upstairs bedroom until his family came inside to prepare the evening meal.

James still lived at home with his mother. He was a small, quiet, geeky sort of man who loved to shoot guns, and he was quite good at it. Actually, he liked firearms a lot, and he collected them. On this particular Easter Sunday, while his mother puttered about in the kitchen, James was probably choosing a few favorite firearms from his collection—a rifle, a couple of .22’s, and a .357 revolver.

As the bells tolled in a nearby church tower, James made his way down the narrow stairs. The youngest child, James’ nephew, was in the bathroom washing up. His sister waited at the door for her turn at the sink. Other members of the family were in the living room watching children play on the floral print area rug. The youngsters had to be mindful of the potted plants, the tabletop radio beside the couch, the figurines on the end tables, and of the portable television sitting on the rolling cart. The TV’s left-leaning rabbit-ear antenna pointed away from a leather recliner. Two coffee tables were positioned near the center of the room. The glass-topped table, the more ornate of the two, held paper plates filled with snacks. The other table was covered with a white, lace-trimmed doily.

James first entered the kitchen, where he shot his brother to death. Then he turned the gun on his sister-in-law and his mother. Next were the children at the bathroom, followed by the remaining family members in the living room. James had moved so quickly that only a small wastepaper basket was disturbed during the shootings.

Back door of Ruppert house

The only sign that anyone had tried to escape was that the back door was open just a crack. A girl’s body lay near it.

James Ruppert knew what he was doing, first firing a shot to disable each of his victims, then firing the killing rounds to the head or heart.

As his family lay dead before him, James calmly called the police and reported the shooting. Then he waited for them to arrive. An investigator present at the scene stated that there was so much blood around the bodies it had started to drip through the floorboards into the basement.

Why did James Ruppert kill all 11 members of his family—the largest family mass murder in the history of the U.S.? The reason he gave police was that his mother had accused him of being a homosexual. He’d also hoped to cash in on the family’s life insurance policies and other assets, which totaled somewhere around $300,000.

Why have others killed their families? What were their motives?

Well, a little background first. According to the National Institute of Justice, the people who kill their families are statistically white males (91%). Over 3/4 of them used a gun to commit the act. And there was normally some sort of domestic-type violence in their history—the number 1 risk factor in all cases. Interestingly, a stepchild in the home is also a common element. Financial troubles also come into play, but only when there has been a history of domestic violence. 92% of ALL cases involved a gun.

Among the cases of murder-suicide, including the murder of their own children, jealousy was found to be a key factor. David Adams, author of Why Do They Kill? Men Who Murder Their Intimate Partners, as research for the book, interviewed several men who’d killed their family members. During those interviews he asked the killers if they’d not had access to a gun would they have still committed the murder. Most said no.

In a sort of strange twist, several years after the Ruppert murders, several knives and other edged instruments were used to brutally kill and dismember a young woman—Tina Mott—in the house across the street from the Ruppert house. This was also a case of familicide.

The sheer horror associated with these two cases has people speculating that Minor Ave. is cursed. Others say the place is haunted. Are either of those theories even remotely possible? Personally, I can’t say either way, but I wanted to explore the ideas. So off I went to Minor Ave. to start exploring and knocking on doors. My daughter, fascinated by these cases, wanted to tag along for the interviews and to see where “it” happened. Together, we wound up spending several hours chatting with residents and witnesses and visiting the crime scenes. (I know, it wasn’t the typical “parent-of-the-year” type of father-daughter outing, but we had a great day).

After interviewing several residents we discovered a theme common to both crime scenes…the neighbors all say the spirits of the dead still visit the two murder houses. Their proof? They’ve seen them.

*You can read about both Minor Ave. cases in a true crime tale I wrote for the anthology Masters of True Crime: Chilling Stories of Murder and the Macabre (edited by R. Barri Flowers). You’ll also find a true crime story there written by Dr. Katherine Ramsland.

Masters of True Crime will soon be available as an audio book.

*Crime scene photos and other images on today’s blog are the property of Lee Lofland and may not be reproduced or used in any manner. Some of the images have been edited to preserve the dignity of the victims. James Ruppert’s photo – West Virginia News

From South Africa With Paul Beecroft: Rhinos and Elephants
Scroll to top